Just hours before the Red Planet reaches opposition, it is occulted by the Moon in a unique preshow event. 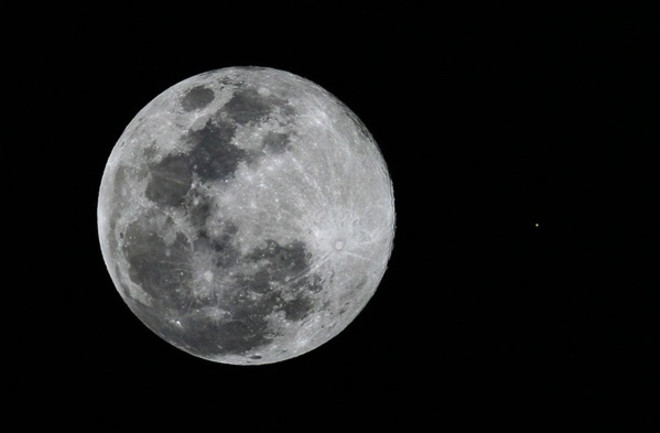 The Moon and Mars (right) sit close just before Christmas in 2007. Although no occultation occurred from the photographer's location, skywatchers in other parts of the world saw the Moon pass in front of the Red Planet. (Credit: Adam Evans (Flickr))

As the Moon orbits Earth, it skims through the sky, passing by the planets each month. But sometimes, things align just right and the Moon appears to pass in front of a planet from our point of view. Such an event is called an occultation, and there’s one coming to the sky Wednesday night, when bright, ruddy Mars is temporarily blocked from view by Earth’s lone natural satellite.

The Red Planet reaches opposition early Thursday morning — a day already marked on many observers’ calendars. But just a few hours earlier, late on Wednesday night, the nearly Full Moon will occult Mars for skywatchers in most of the U.S. (The only exceptions are those on the East and Gulf coasts, who will witness a near miss.) Additionally, observers in Canada, Greenland, Iceland, the U.K., northern Africa, and northwestern Europe can also see the event.Binoculars or a telescope will be useful to watch the planet disappear and reappear. But even without any equipment, you’ll notice when bright, red-hued Mars (magnitude –1.9) — readily visible to the naked eye — winks out of view behind the lunar disk. It will take about an hour for the Moon to move far enough along the ecliptic to allow Mars to slip back out into sight. The moments of disappearance and reappearance — as well as the duration of the occultation — depend heavily on your location; below are the times for a few notable U.S. cities, but you can look up the crucial times for the city nearest you at www.lunar-occultations.com/iota/planets/1208mars.htm. (Note that the times given on this website are in UT, so you will need to convert to your local time. Below are the local times that Mars will disappear and reappear from behind the Moon for several major cities across the U.S.)

This chart shows the eastern sky shortly before Mars is occulted in the Midwest, around 9 P.M. CST. Alison Klesman (via TheSkyX)

All eyes on Mars

An hour after sunset in the Midwest on Dec. 7, Mars and the Moon are already more than 10 degrees high in the east and stand less than 2 degrees apart, with Mars to the lower left (east) of the Moon. Over the next few hours, they will continue to rise higher above the eastern horizon, nestled among the stars of Taurus the Bull. The pair sit roughly halfway between the bright star Aldebaran (magnitude 0.9), which serves as the Bull’s eye, and Elnath (magnitude 1.7), which marks the tip of Taurus’ western horn. Although Full Moon does not officially occur until 11:08 p.m. EST, our satellite’s face will already appear fully illuminated to the naked eye.

Occultations occur over only a limited portion of the globe because the celestial geometry must be just right for the Moon to appear to cross in front of Mars. It’s just like an eclipse, which also traces a limited path over the globe. Even if you’re not in the path, it’s worth standing outside under the stars to enjoy the sight of our Moon skimming close to Mars. Again, a telescope or binoculars will show this best, but you should be able to see the bright planet easily without any optical aid.

Shortly before midnight EST, the Full Cold Moon will occur, the last Full Moon of the year. And shortly after midnight EST, Mars will officially reach opposition. Through a telescope, Mars appears 17 inches wide — large enough for bigger scopes to show some of the planet’s most prominent geological features. Around midnight, Mare Cimmerium and Mare Elysium should appear near the center of the planet. Look also for its lighter-colored polar caps; the northern cap may even sport a darker region, called the north polar hood, which is now starting to shrink as winter in Mars’ northern hemisphere comes to a close.

So much else to see

About 16 degrees west of the pair is the Pleiades (M45), a nearby open cluster of young stars that is easily visible to the naked eye. Many people see six or seven stars without any optical aid; pull out binoculars or a low-power telescope, however, and many more luminaries will pop into sight. This is a particularly good target for low powers, as larger telescopes will provide a field of view so small that not many stars are visible.

Just southeast of Taurus, closer to the horizon, is Orion the Hunter, familiar to many because of Orion's three-star belt and bright red shoulder, Betelgeuse. Hanging below the easternmost belt star is Orion’s Sword, which contains the stunning Orion Nebula (M42), one of the nearest star-forming regions to Earth. Visible to the naked eye as a faint, extended glow, Orion's Nebula is a target you’ll want a telescope for, which allows you to peer into the heart of thick dust clouds where baby stars are born. The stars of the Trapezium Cluster form a small box in the center of the nebula.

Close to the horizon is the brightest star in the sky: Sirius, the nose of the Big Dog in Canis Major. A blazing magnitude –1.4, this star will appear nearly as bright as Mars and may seem to twinkle or dance like mad, particularly earlier in the evening after it’s just risen. This is because you’re looking through more — and more turbulent — air closer to the horizon than the zenith, and all this air “scrambles” the light from Sirius, like looking at a light through water. While this star is clearly visible to the naked eye, binoculars or a telescope may show it twinkling and dancing like a diamond catching the light until it climbs high enough above the horizon.

And there’s one more obvious target in the sky: the Moon itself! The Full Moon is quite bright; using high magnification to look at just a small portion of its surface can help cut down on the glare. Additionally, you can try using a Moon filter or even wearing your sunglasses when looking through the eyepiece. During the Full Moon, the Sun appears directly overhead from the lunar nearside’s point of view. Shadows are at their smallest and contrast is low, but the dark maria (Latin for seas, although these regions never hosted water) still provide a wonderful landscape to enjoy.

Both the Moon and Mars will remain in the sky until dawn on Dec. 8. So, enjoy this stunning pairing all night, paying particular attention as they not only cross paths but slowly draw apart again — by the time they set, they’re just over 3.5 degrees apart!

This article was originally published on astronomy.com.