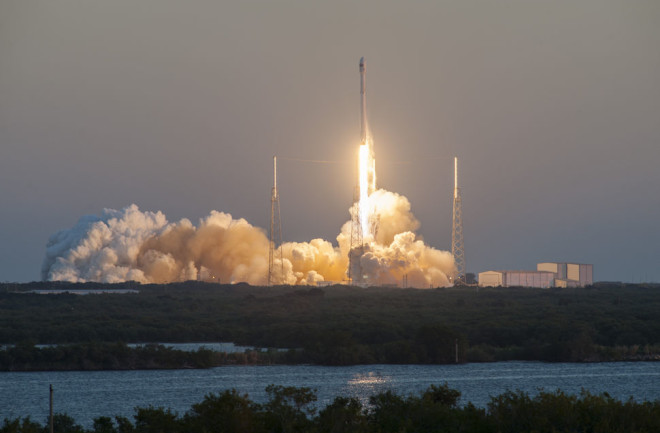 SpaceX’s Falcon 9 rocket lifts off during a flight in February. (SpaceX)

Update: SpaceX was forced to postpone its sixth resupply mission just three minutes before launch Monday due to an approaching anvil cloud that drifted too close to the launch site in Cape Canaveral Air Force Station. The next attempt is scheduled for 4:10 p.m. EDT Tuesday.

SpaceX is about to make its second attempt at something that’s never been done in the history of space exploration: Launch a rocket, then land said rocket.

The private spaceflight company is scheduled to launch one of its Falcon 9 rockets, affixed with a Dragon capsule, at 4:33 p.m. EDT Monday from Cape Canaveral Air Force Station, completing the sixth of 12 planned commercial resupply missions to the International Space Station. But the resupply mission, though important, isn’t the main event: Spaceflight fans will be watching to see if the Falcon 9 rocket can autonomously guide itself to a gentle landing back on Earth.

If the mission goes as planned — SpaceX higher-ups are putting the odds of a successful landing at 75 to 80 percent — it will be a huge step toward the company’s long-term goal of making space travel less expensive through the use of reusable rockets. You can watch live coverage of the historic attempt right here, courtesy of SpaceX, beginning at 3:30 p.m. EDT.

Reusability is the Reward

Space travel is incredibly expensive because the muscle that gets people and supplies into space is one-time use. Most rockets are unrecoverable after liftoff because their bodies are destroyed or lost at sea once they’ve fired and done their job. That inflates the cost of shipping things into space since a new rocket needs to be assembled for each mission.

SpaceX wants to make space travel less wasteful and expensive by building rockets that guide themselves safely back to Earth after launch. However, it’s not easy landing a 14-story obelisk on a target about the size of a football field. In January, SpaceX’s first attempt to land a Falcon 9 ended in flames after the rocket failed to hit its mark, smashed into the platform and exploded. SpaceX founder Elon Musk later revealed the rocket’s grid fins ran out of hydraulic fluid, disabling the craft’s steering.

We’ve been assured this version of the Falcon 9 is filled to the brim with essential fluids.

After the Falcon 9 launches, the first stage of the rocket will fall away and the second stage will continue to ferry the Dragon cargo capsule packed with 4,300 pounds of food, supplies and lab experiments to the ISS. Once the first stage of Falcon 9 is disengaged, it will fire its engines and return to Earth. The landing target is a 300-foot by 170-foot unmanned, floating platform roughly 200 miles off the coast of Jacksonville, Florida.

The unmanned landing pad that will be the target on Monday. (SpaceX)

When the Falcon 9 first stage returns to Earth, it will be traveling at a speed of roughly 1 mile per second, which means slowing down is priority number one. To accomplish this, the Falcon 9 engines will relight in a series of three burns: one to adjust the position of the vehicle, a second to slow the Falcon 9’s speed, and a final landing burn to bring the craft to a soft touchdown.

Whether all of that happens in just a few hours remains to be seen, but if SpaceX pulls it off, you’ll have witnessed something truly unprecedented in the history of exploring the cosmos.