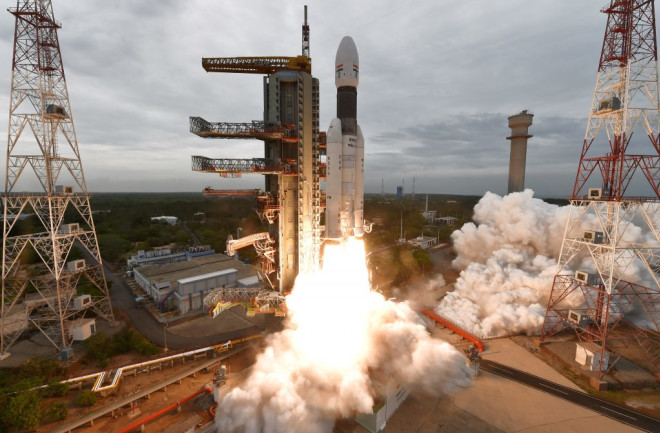 India could be the fourth country to land a spacecraft on the lunar surface (Credit: ISRO)

India’s space agency is prepping for their first soft landing on the Moon today.

The mission, called Chandrayaan-2, would make India the fourth country to reach the Moon’s surface — behind the United States, Russia, and China.

The Indian Space Research Organization’s (ISRO) Chandrayaan-2 mission consists of several parts, including an orbiter to observe the Moon for a year, the Pragyan rover to explore the surface, and the Virkam lander that will bring the rover down. The rover and the lander will be active for about 14 Earth days, as they send information back via the orbiter.

In late July, ISRO launched Chandrayaan-2 on their GSLV MkIII-M1 rocket, after a last-minute delay on the launch pad due to a technical issue. The orbiter released Virkam on September 2 and has been orbiting the Moon since the release.

Exploring the Moon’s south pole region could also give space organizations more information about the resources stored in the area. If India’s space agency turns up more evidence of frozen water and other natural elements, it could help make the case for future lunar settlements.

Israel sought to be the fourth country to land on the Moon in April 2019, but as the robotic lander came toward the surface, a malfunction sent the spacecraft crashing into the Moon instead.

This is the second lunar mission for India. Chandrayaan-1 was launched in 2008, and spent almost one year orbiting the Moon, where it discovered traces of water on the lunar surface. The mission also included an impact probe that the orbiter propelled toward the surface.

Viewers can watch the landing live through ISRO’s social media. The viewing will begin at 3:30 p.m. EST on Friday, September 6.