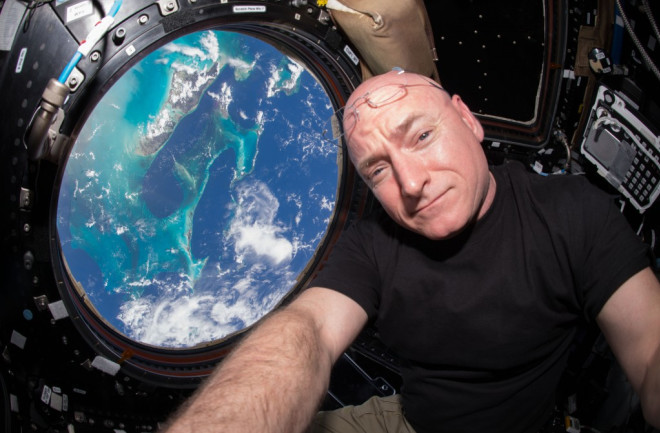 Astronaut Scott Kelly takes a selfie aboard the International Space Station with the earth in the background. (Credit: NASA)

At around 11:25 EST Tuesday, a metal capsule will gently parachute down to Earth in Kazakhstan after leaving the International Space Station some 250 miles above the planet.

Aboard that capsule will be three passengers, including astronaut Scott Kelly and cosmonaut Mikhail Kornienko, who just completed a 340-day stay aboard the International Space Station. While inhabiting the ISS, Kelly and his Russian counterpart Kornienko were subjected to a battery of experiments meant to explore everything from the effects of microgravity on their eyeballs to the effects cosmic radiation has had on their DNA. Kelly, in the process, set the American record for most cumulative days spent in space.

Kelly is of particular interest to researchers because he has an identical twin, former astronaut Mark Kelly, who remained on Earth while he has floated above, providing the perfect scientific control. Now, the experiment is done, and Kelly — who became a household name — will return to Earth, and you can watch his homecoming live.

Here’s the anticipated schedule (all times EST) for the rest of the evening, according to NASA. You’ll want to tune in throughout the night:

The yearlong experiment is meant to prepare NASA for a future manned mission to Mars and beyond. The long-term effects of living in space are still unknown, but the immediate effects are quite noticeable. While floating in microgravity, fluids in the body get redistributed, which makes astronauts faces swell up. Astronauts also lose significant bone and muscle mass in space, something they attempt to combat by working out up to two hours every day.

Kelly on a spacewalk outside of the ISS. (Credit: NASA)

In addition to being a human guinea pig, Kelly has kept busy by sharing a stream of stunning photographs taken from his unique perch above the world. He went on several spacewalks, including one in December to repair a broken transporter that had become stuck. Kelly also showed off his green thumb and oversaw the growth of the first flower to bloom in space.

Here’s hoping for a safe return trip for all three men on board.