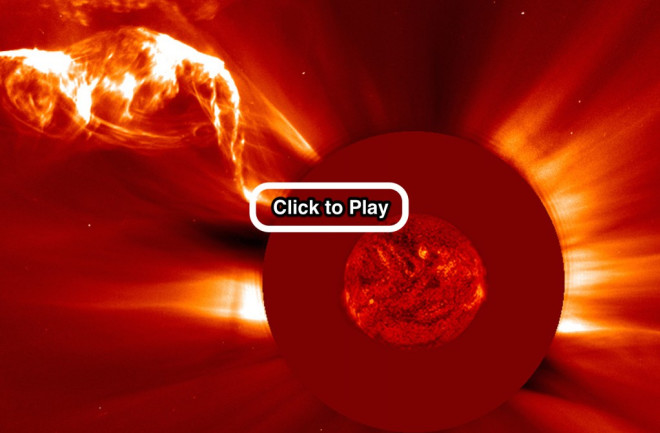 A screenshot of an animation of images from the Solar and Heliospheric Observatory, or SOHO, shows an eruption of plasma exploding into space from the Sun. (Source: ESA/NASA/SOHO) An elongated filament of plasma suspended above the Sun by titanic magnetic forces suddenly broke free on April 28 and 29, 2015. To watch the ensuing explosive spray of incandescent material out into space — a phenomenon known as a coronal mass ejection, or CME — please click on the image above. The animation consists of images from the orbiting Solar and Heliospheric Observatory. SOHO's Lasco C2 camera is able to acquire imagery of wispy CMEs like this only by blocking out the blindingly bright Sun using an "occulting disk."

Click for large image. (Credit: NASA) You can think of this technique as a kind of artificial eclipse. In the screenshot above, a full-disk image of the Sun acquired by another spacecraft, NASA's Solar Dynamics Observatory, was superimposed over the occulted area to provide a sense of scale. For a full-size version of the still image, click on the thumbnail at right.

Another instrument on SOHO acquired this wider view of the action:

SOHO's Lasco C3 camera acquired this wide view of the coronal mass ejection that blasted out into space on April 28 and 29, 2015. (Source: ESA/NASA/SOHO) The donut shows the area occulted by SOHO's Lasco C3 camera, and the white ring in the middle shows the diameter of the Sun. This view extends about 28 million miles outward, roughly Mercury's distance to the Sun on its closest orbital approach. This too is a screenshot, so make sure to click on it to watch a dramatic animation (and again, please come back!). https://youtu.be/OGMeIG3oWFc To see what precipitated the massive explosion, check out the video above. It consists of false-color images from the SDO spacecraft. Watch it several times, and as you do note that wispy blue filament. This is plasma — super hot charged hydrogen and helium — suspended in the Sun's outer atmosphere, or corona, by magnetic forces. As you can see in the video, the plasma filament tears free of those magnetic shackles, unleashing the mass ejection of coronal plasma out into space. As the filament flies free, also watch for how the Sun's surface responds. Very cool! This was actually the second recent eruption of a solar filament. Another one occurred on April 21, 2015: https://youtu.be/WEd0kRjhi1Y This is obviously a difference kind of view. Instead of viewing the eruption against the solar disk, we're seeing it more obliquely, against the darkness of space. When seen from this kind of angle, the event is known as a "prominence eruption." Here's a good explanation from NASA, accompanying imagery and an animation of a monster prominence eruption that occurred in 2011:

Prominences are anchored to the Sun's surface in the photosphere, and extend outwards into the Sun's hot outer atmosphere, called the corona. A prominence forms over timescales of about a day, and stable prominences may persist in the corona for several months, looping hundreds of thousands of miles into space. Scientists are still researching how and why prominences are formed. The red-glowing looped material is plasma, a hot gas comprised of electrically charged hydrogen and helium. The prominence plasma flows along a tangled and twisted structure of magnetic fields generated by the sun’s internal dynamo. An erupting prominence occurs when such a structure becomes unstable and bursts outward, releasing the plasma.