Dude is tall. So are his parents. 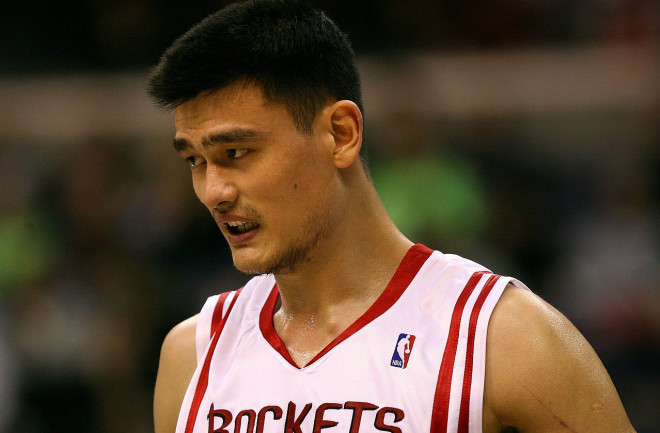 I knew that Yao Ming’s parents are very tall. Though his father, at 6’7, arguably contributed less than his mother, at 6’3, which is farther above the female mean in standard deviation units. But check this out from Superfusion: How China and America Became One Economy and Why the World’s Prosperity Depends on It:

Yao had essentially been bred. Both his parents played basketball. His 6’2 [different height from Wikipedia -Razib] mother, Fang Fengdi, perhaps the tallest woman in China, had been married to an even taller man. She had served as a Red Guard during the height of the Cultural Revolution and had been an ardent Maoist. She enthusiastically participated in the glorious plan of the local government to use her and her husband to produce a sports superstar. The Shanghai authorities who encouraged the match had gone back several generations to ensure that size was embedded in the bloodline. The result was Yao, a baby behemoth who just kept getting bigger.

What’s the chance of Yao? Let’s start with his mother being 6’3, his father being 6’7. Let’s assume that the genetic potentiality of Chinese women leaves a median height of 5’2, and men at 5’8. I suspect I’m low-balling this because there’s likely a fair amount of variability within China, with northerners being taller. Additionally, if Yao’s mother lived through the Cultural Revolution I’m wondering if she and her husband are even at their full height assuming normal nutrition. But let’s go with that. With 2 inches per standard deviation, ~85% heritability, you’d expect any of their children to be 6 standard deviations above the population norm in height (sex corrected). For a male that’s 6’8 (using the 5’8 figure as the median). Yao’s taller than that. In fact, at 7’6, he’s 5 standard deviations above the expected value. A freak if you will.

I think that that indicates that I’m being too conservative about the genetic potential of Yao’s parents, the full median height of the source population from which they derive assuming modern nutrition, and the heritability constraining to Yao’s family. In other words, I assume that the Chinese officials knew that neither of Yao’s parents were quite total freaks within their lineages, which indicates that there’ll be less regression back to the mean because their height is less likely attributable to non-replicable environmental variables. Though Yao is still freakishly tall in relation to both his parents, so I don’t think he was inevitable. Though of course the odds of someone of Yao’s height being born to his particular set of parents was orders of magnitude higher than for two random Chinese.

Note: To do the back-of-the-envelope I just used the breeder’s equation. Probably so far above the norm there are more non-linearities at work so that deviations from the expected values are probably higher. I guess only the Chinese officials who did the genealogical inquiries will know ...