Was the Toba Eruption Not the Volcanic Catastrophe We Thought It Was? 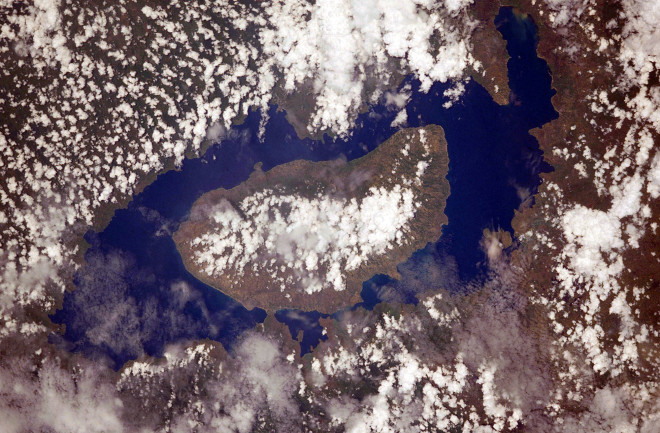 The Toba caldera in Indonesia seen from the Space Shuttle in 1985. NASA The largest eruption in the past million years was at Toba in Indonesia. How big was it? It erupted over 3000 cubic kilometers of volcanic debris. 3000 cubic kilometers! That would pave the entirety of Rhode Island in a kilometer deep of ash, rocks, and pumice. It would take roughly 300 Pinatubo-scale eruptions to match that. The eruption itself created a caldera formed when the land collapsed when all that material erupted that spans 100 kilometers from end to end and 30 kilometers from side to side. Thick deposits of ash can be found in India, thousands of kilometers away. This is truly a "super-eruption". You'd expect that an eruption of this enormous magnitude would have a big impact on the Earth's climate. The eruption occurred ~73,000 years ago, which is well after the arrival of modern humans on the scene, so how did humans survive what must have been a global catastrophe? Geologists like Michael Rampino have suggested that the eruption created a "genetic bottleneck" for humans, meaning perhaps only 10,000 survived the Toba eruption at all and all modern humans since them came from this population. This idea has been pretty resoundingly discredited by geologists and anthropologists alike thanks to better dating of the eruption and better understanding of modern humans' genetic ancestry. Yet, the question remains: how did humans survive such a massive eruption and its aftermath? Maybe they survived because the aftermath of the eruption didn't end up causing the sort of many-years-long volcanic winter that many geologists have postulated. A new study in the Journal of Human Evolution by Chad Yost and others took a look at what actual evidence exist for climate change related to the eruption in Eastern Africa. They looked at plant remains and charcoal (that suggest fires from drier conditions) above and below the ash layers from Toba found in sediment in Lake Malawi. Now, the ash layer in eastern Africa wouldn't even be noticed by most people. It is what we call a "cryptotephra", where you need to carefully examine each layer of sediment looking for infrequent glass shards (ash) that fell after being blown in the stratospheric winds. However, ash from most eruptions can be correlated by looking at the composition and shape of the ash, so these few fragments can be tied to Toba. However, looking above and below the layer with ash from Toba, Yost and others found no real evidence of dramatic changes in the plant diversity or fires related to climate shifts due to a prolonged volcanic winter. There is a brief increase in charcoal and certain grass species that suggest that just after the eruption there may have been slight drying in Eastern Africa, but no evidence for years of cooling from a volcanic winter caused by Toba. Instead, Yost and others suggest that maybe we're just wildly overestimating the amount of climate change that Toba might have caused. Although the eruption was much larger that the 1815 eruption of Tambora, also in Indonesia, the amount of sulfur found in the volcanic deposits from Toba suggest that maybe it didn't really emit much more sulfur than that Tambora eruption. Of course, the Tambora eruption did famously cause the "Year without a Summer", but definitely not nearly a decade of global "volcanic winter". In fact, the climate impact on Eastern Africa might have only been about three times that of the Pinatubo eruption even though the Toba eruption was 100 times larger by volume. So, it might have been cooler and drier for a year or two in Eastern Africa, but definitely not an extreme enough change to explain the shrinking numbers of modern humans that have been estimated by looking at DNA. This is a prime example of correlation likely not leading to causation: Toba happened to occur during this drop in modern human populations, but it does not appear to be the reason for the drop. It also shows that when we talk about the climate influence of big volcanic eruptions, we can't just scale the impact based just on the amount of stuff that was erupted. I've always wondered why few people talk about finding the massive climate signal of the most recent Yellowstone eruption. Part of the issue is that we don't have complete climate records that go back that far. The other might be that these massive eruptions might not be the endtimes event they are sometimes made out to be. Instead, we need a better understanding of how much sulfur might be in the magma during a specific eruption before we can compare them to others. Toba was definitely a monster eruption, but maybe it wasn't as bad as it seems to the planet as a whole.