Scientists show that the pests are programmed to sleep at around midday, when the weather is warmest. 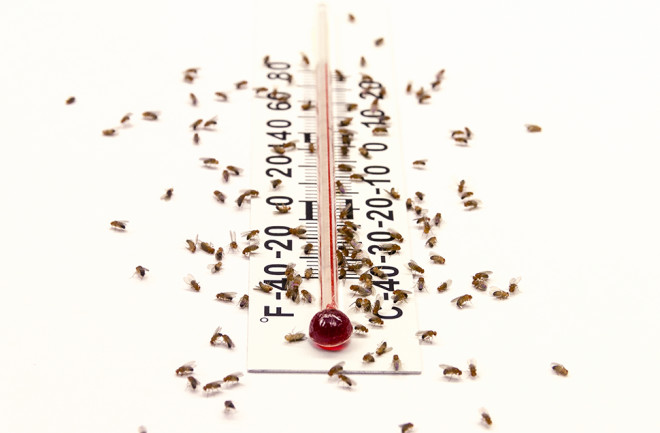 We want to believe that we’re completely different from fruit flies. But we actually share some serious similarities. In fact, beyond a mutual appreciation for berries and bananas, we both tend to tire out around the middle of the day — a tendency that we can blame on our brains.

According to an analysis in Current Biology, fruit flies often fall asleep around the middle of the day, when the temperatures are the warmest. This, the authors say, is because the brain circuit that controls the fruit flies’ desire to sleep is connected to what is basically a “brain thermometer,” activated by warmth.

Temperatures influence all sorts of human and animal activities, but warm and cold weather seems to have a particularly strong power over our sleep. “Changes in temperature have a strong effect on behavior in both humans and animals, and offer animals a cue […] to adapt to the changing seasons,” says Marco Gallio, a neurobiology professor at Northwestern University, in a press release. “The effect of temperature on sleep can be quite extreme, with some animals deciding to sleep off an entire season — think of a hibernating bear — but the specific brain circuits that mediate the interaction between temperature and sleep centers remain largely unmapped.”

To better comprehend the connections between temperature and sleep in the brain, Gallio and a team turned to Drosophila, also known as fruit flies. These pests, the team says, are suited for studying sleep because they don’t stave off sleep as other animals do. Instead, they listen to their instincts, which allows scientists to directly investigate the influence of outside factors, such as temperature, on sleep.

Studying these flies in the lab, the team found that the brain pathway that supervises their sleep is attached to a specialized system of receptors that act as a sort of thermometer, responding to temperatures around 77 degrees Fahrenheit or above. This “brain thermometer” activates in warm weather and stimulates sleep, ensuring an increase in the desire to sleep with the midday warmth.

The team adds that this “brain thermometer” operates alongside another sort of thermometer, identified in a previous paper, that works in cold conditions.

“We identified one neuron that could be a site of integration for the effects of hot and cold temperatures on sleep and activity in Drosophila,” says Michael Alpert, a neurobiology postdoc at Northwestern University and a member of the team, in a press release. “This would be the start of interesting follow-up studies.”

In fact, in addition to illuminating the behavior of fruit flies, the team says that these two thermometer systems could also advance understandings of the activities of a wide range of animals, including humans. “People may choose to take an afternoon nap on a hot day […] but what do you choose and what is programmed into you?” Gallio says in a press release. “There actually might be a very strong underlying biological mechanism that is overlooked in humans.”