Our sun has had close encounters with other stars in the past, and it’s due for a dangerously close one in the not-so-distant future. 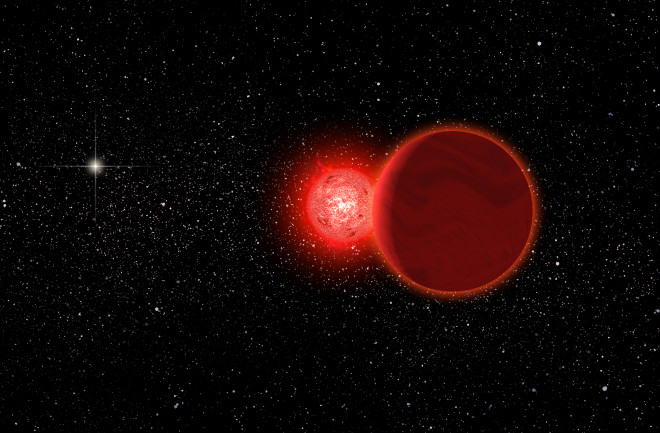 Scholz’s Star and its binary brown dwarf fly by our solar system some 70,000 years ago in this artist’s illustration. Our sun shines bright in the background. (Credit: Michael Osadciw/University of Rochester)

Every 50,000 years or so, a nomadic star passes near our solar system. Most brush by without incident. But, every once in a while, one comes so close that it gains a prominent place in Earth’s night sky, as well as knocks distant comets loose from their orbits.

The most famous of these stellar interlopers is called Scholz’s Star. This small binary star system was discovered in 2013. Its orbital path indicated that, about 70,000 years ago, it passed through the Oort Cloud, the extended sphere of icy bodies that surrounds the fringes of our solar system. Some astronomers even think Scholz’s Star could have sent some of these objects tumbling into the inner solar system when it passed.

However, Scholz’s Star is relatively small and rapidly moving, which should have minimized its effect on the solar system. But in recent years, scientists have been finding that these kinds of encounters happen far more often than once expected. Scholz’s Star wasn’t the first flyby, and it won’t be the last. In fact, we’re on track for a much more dramatic close encounter in the not-too-distant future.

“[Scholz’s Star] probably didn’t have a huge impact, but there should be many more stars that have passed through that are more massive,” astronomer Eric Mamajek of NASA’s Jet Propulsion Laboratory, whose 2015 paper in Astrophysical Journal Letters put Scholz’s Star on the map, tell Astronomy.

The Discovery of ‘Scholz’s Star’

Around Christmas 2013, Mamajek was visiting a friend and fellow astronomer, Valentin Ivanov, at the offices of the European Southern Observatory in Santiago, Chile. While the two chatted, Ivanov was looking at recent observations of a star cataloged as WISE J072003.20–084651.2.

The star caught Mamajek’s interest because it was just about 20 light-years away, but astronomers hadn’t noticed it thanks to its dim nature and tiny apparent movement (or proper motion) across our night sky.

To him, those two things were a clue. Since it didn’t appear to be moving much side to side, the star was likely moving toward us or away from us at a breathtaking pace. As the astronomers continued talking, Ivanov measured the star’s radial velocity to learn how quickly it was moving toward or away from our sun. Soon, they had their answer.

“Within five or 10 minutes, we had the initial results that this thing came within a parsec [3.26 light-years] of the sun,” Mamajek says. “It was screaming through the solar neighborhood.”

The two astronomers and their colleagues would eventually show that it passed even closer than that. In fact, it passed closer to our sun than any other known star. This status prompted them to name the cosmic trespasser after its initial discoverer, an astronomer named Ralf-Dieter Scholz, who’s devoted significant time to finding nearby stars.

All the Other Passing Suns

Mamajek has since moved on from studying Scholz’s Star. But in the meantime, other astronomers have also taken up the work. And, thanks to a European Space Agency satellite called Gaia, which is built to map the precise locations and movements of over a billion stars, we now know about other close encounters.

In 2018, a team of researchers led by Coryn Bailer-Jones of the Max Planck Institute for Astronomy in Germany, used Gaia data to plot our sun’s future meet-ups with other stars. They discovered nearly 700 stars that will pass within 15 light-years of our solar system over just the next 15 million years. However, the vast majority of close encounters have yet to be discovered, the team suggests. But they suspect roughly 20 stars should pass within just a couple light-years of us every million years.

However, “space is big,” Mamajek points out. “Statistically, most of those stars would pass the outer edge of our solar system.” That means encounters like the one with Scholz’s Star are common, but only a few are close enough to actually dislodge a significant number of comets, potentially leading to a cosmic bombardment of Earth.

Nonetheless, a few stars should still come surprisingly close. And if a large, slow-moving star did pass through the edge of the Oort Cloud, it could really shake up the solar system.

The ‘Strongest Disrupting Encounter’ in History

A massive star steamrolling through the outer solar system is exactly what Gaia data show will happen 1.4 million years from now, according to a 2016 study. A star called Gliese 710 will pass within 10,000 astronomical units — 1 AU is equal to the average Earth-sun distance of 93 million miles. That’s well within the outer edge of the Oort Cloud.

And while Scholz’s Star was so tiny it would have been barely visible in the night sky — if at all — Gliese 710 is larger than our current closest neighbor, Proxima Centauri. So when Gliese 710 reaches its closest point to Earth, it will burn as a brilliant orange orb that will outshine every other star in our night sky.

This event could be “the strongest disrupting encounter in the future and history of the solar system,” the authors wrote in their paper, published in the journal Astronomy & Astrophysics.

Fortunately, the inner solar system is a relatively tiny target, and even if Gliese 710 does send comets flying our way, it would take millions of additional years for these icy bodies to reach us. That should give any surviving future humans plenty of time to take action.

And in the meantime, they can enjoy watching what may be one of the closest stellar flybys in the history of our solar system.