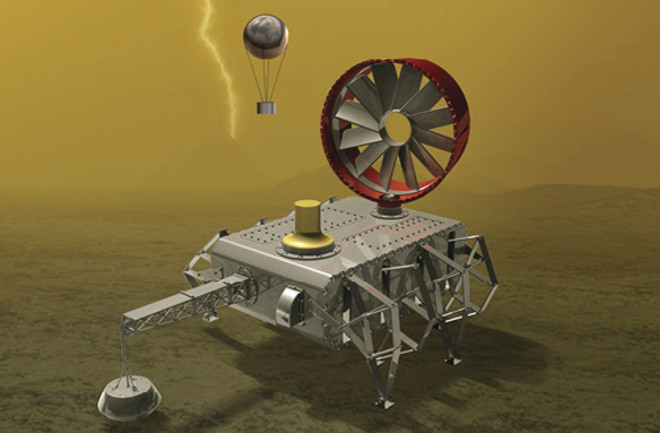 Venus is not a forgiving planet. The longest that any machine has survived there is 127 minutes. Surface temperatures surpassing 800 degrees Fahrenheit and clouds of sulfuric acid are a perfect recipe for frying circuits. So Jet Propulsion Lab engineer Jonathan Sauder and his team designed a futuristic Venus rover that doesn’t need electronics. Instead it uses mechanical systems that would have been familiar to Leonardo da Vinci.

The Automaton Rover for Extreme Environments (AREE) — which recently received a NASA Innovative Advanced Concepts grant — is built entirely of hardened metals and guided by a clockwork computer. The rover is still far from a planned mission, but it would be able to collect weeks’ worth of climate and seismic data from Venus’ surface, all recorded on phonograph-style records that periodically would be lifted by balloon to an overhead drone. Then NASA just needs to salvage an old Victrola.

A solar-powered drone could safely fly dozens of miles over the surface, where temperatures and pressure are Earth-like. Gas-filled balloons would tote rock samples and phonograph records up to the drone, which would record the findings and relay it to an orbiting spacecraft. That craft would then beam data back to Earth.

Designers are exploring several ways to send information to Earth, but the base concept has seismic data cut into records that are subsequently launched above the clouds by gas balloons. A simpler approach would involve retro-reflectors bouncing signals from Venus’ surface.

History provides many examples of mechanical computers, like the Greek Antikythera mechanism, which calculated eclipse dates more than 2,000 years ago. AREE’s computer would need to track temperature, pressure, winds and seismic events.

Like the Mars Curiosity rover, AREE’s drill would let scientists see into Venus’ interior — and past.

Astronomers know little about Venus’ interior, and that impedes our understanding of how planets form. So one prime objective is to set up “Earth’s Twin” with a seismometer, which measures geologic activity.

Kinetic sculptor Theo Jansen designed a system of legs that walk naturally, powered only by the wind. His autonomous Strandbeests gained fame roaming Earth’s beaches. His legs inspired those used by AREE.

[This article originally appeared in print as "Walking With Venus' Wind."]