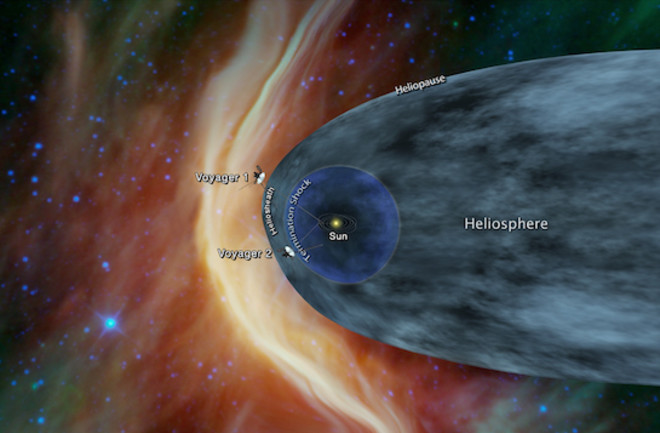 The image shows the heliosphere that wraps around the Sun, its planets and far beyond. The heliosheath is the outermost later of the heliosphere, and is where Voyager 2 is traveling through to get it to interstellar space. (Credit: NASA/JPL-Caltech)

When it comes to space exploration, no one has the Voyager missions beat. On October 5, NASA reported that their Voyager 2 spacecraft is nearing our heliosphere’s outer borders, and could soon enter interstellar space. Data shows that the probe is detecting more and more cosmic rays from outer space — indicating a slow escape from the sun’s stellar bubble. If all goes as planned, the craft will follow in the footsteps of Voyager 1 and become the second human-made object to ever visit the interstellar medium.

Voyager 2’s mission has been long and strenuous, to say the least. It’s traveled about 11 billion miles (17.7 billion kilometers) from Earth since it launched in 1977, and spent three decades cruising through space before finally reaching the outermost layer of our heliosphere — the massive bubble, created by the sun’s solar wind, that encompasses the Sun, its planets and regions far beyond their orbits.

Since it reached this remote region, called the heliosheath, in 2007, researchers have been patiently waiting for it to pass through the heliopause — the threshold that separates the heliosphere and interstellar space. And based on recent data, Voyager 2 is starting to make some headway.

In August, researchers noted that there was a five percent increase in the cosmic rays detected by the craft’s Cosmic Ray Subsystem, as well as its Low-Energy Particle instrument. Made up of mainly protons, electrons and atomic nuclei, cosmic rays blast through space at nearly the speed of light, and are thought to be ejected during powerful supernova explosions.

It’s believed that the heliosphere blocks a lot of these rays from reaching our solar system, but as you travel closer to the edge and the barrier starts to thin out, more cosmic rays become detectable. Voyager 2’s increased measurements suggest that it’s inching closer to the heliopause, and could soon enter the interstellar medium.

And if we’re going off of history, the craft could be crossing the threshold any day now. In 2012, Voyager 1 experienced a similar spike in cosmic rays about three months before it passed through the heliopause, becoming the first craft to invade interstellar space. It’s worth noting, though, that Voyager 1 entered the heliopause at a different location, which could cause discrepancies in cosmic ray measurements and time of entry. Voyager 2 is also lagging about six years behind its counterpart, so it will likely cross at a different point in the sun’s 11 year cycle. This cycle causes variations in solar flares, eruptions and winds, which makes the heliopause expand and contract.

Cosmic ray measurements can’t pinpoint Voyager 2’s precise location or tell us exactly when it will cross over, but the increased detections do tell us that it’s gaining speed on the heliopause, and that it could soon become the second craft to ever penetrate the interstellar medium.