Vote for Groups E and F in the Geology World Cup

The 2018 Geology World Cup continues! Remember, vote for the other groups so far: Group A, Group B, Group C, Group D. Group EBrazil 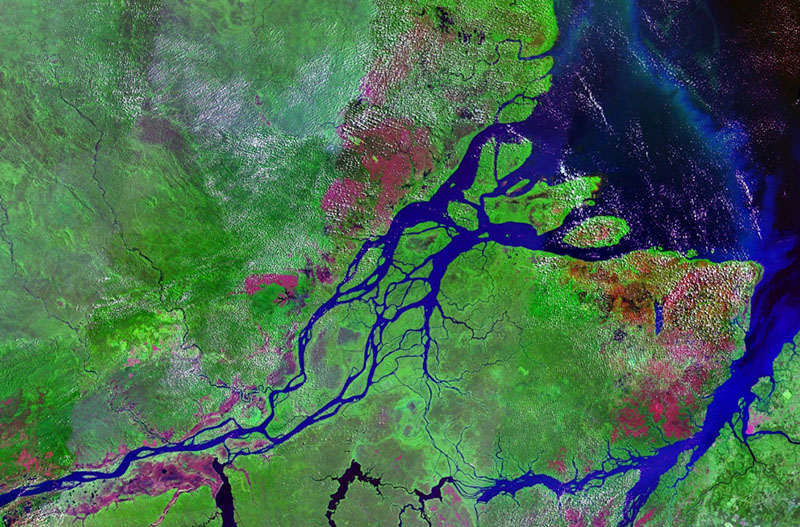 The mouth of the Amazon River, seen from space in 1990. NASA. Let's not beat around the bush, Brazil has the Amazon. One of the most remarkable river systems on the planet, it dominates the central portion of the country and flushes an amazing amount of sediment from the base of the Andes to the west out into the Atlantic to the east. But that's not all! The only flood basalt province in South America sits in the area where Brazil, Argentina, Paraguay and Uruguay meet. These Cretaceous lavas, known as the Paraná Traps, cover over 1.5 million square kilometers. There are even hints that some of the Paraná was explosively erupted. Costa Rica 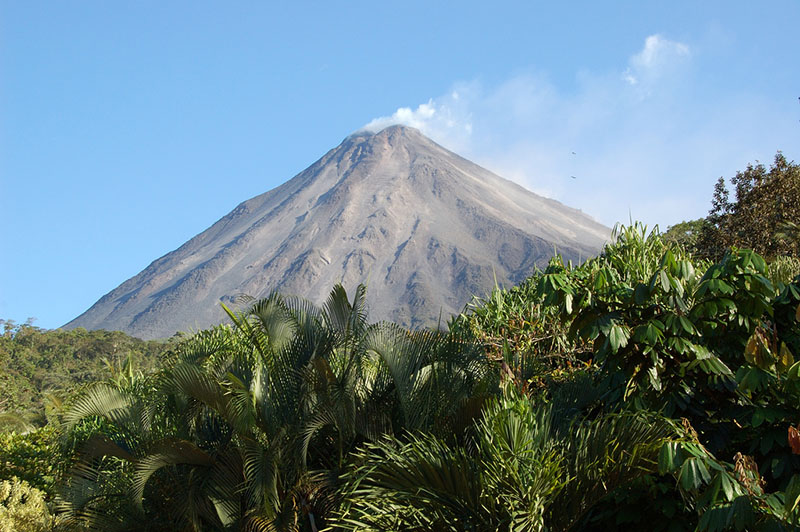 The steaming summit of Arenal. Wikimedia Commons. This Central American nation is dominated by volcanoes. Until recently, Arenal was a lighthouse of a volcano, in almost constant eruption since 1968. However, it fell quiet in 2010 and has remained that way. However, eruptions at Turrialba, Poás and Rincón de la Vieja in the last decade have made up for Arenal's nap. Beyond these volcanic features, which are driving Costa Rica's push towards energy independence through geothermal, Costa Rica has has some amazing coral reefs off the Caribbean and Pacific coasts of the country. Serbia 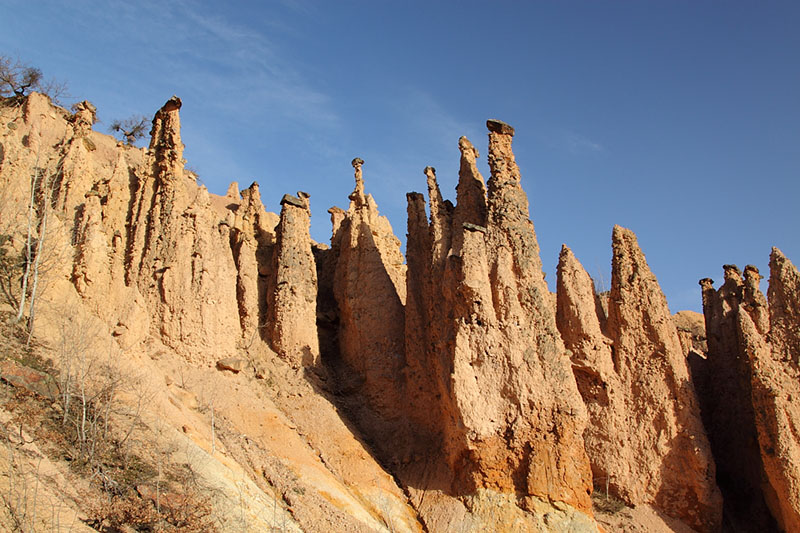 The eroded volcanic tuffs that created the hoodoos at Đavolja Varoš. Wikimedia Commons. Serbia is dominated by mountains in the south - four ranges, including the Balkans, Carpathians, Dinaric Alps and Rhodope Mountains. To the north, the country flattens out into the plains created by the Danube as it passes through Belgrade. This all gives Serbia a very complicated tectonic history, with multiple collisions created the rough topography. You'll find the Prerasts of Vratna, a series of natural bridges carved in limestone and even volcanic landscapes like Đavolja Varoš, where hoodoos were created as less-resistant volcanic tuff was eroded underneath a cap of andesite lava (see above). Switzerland 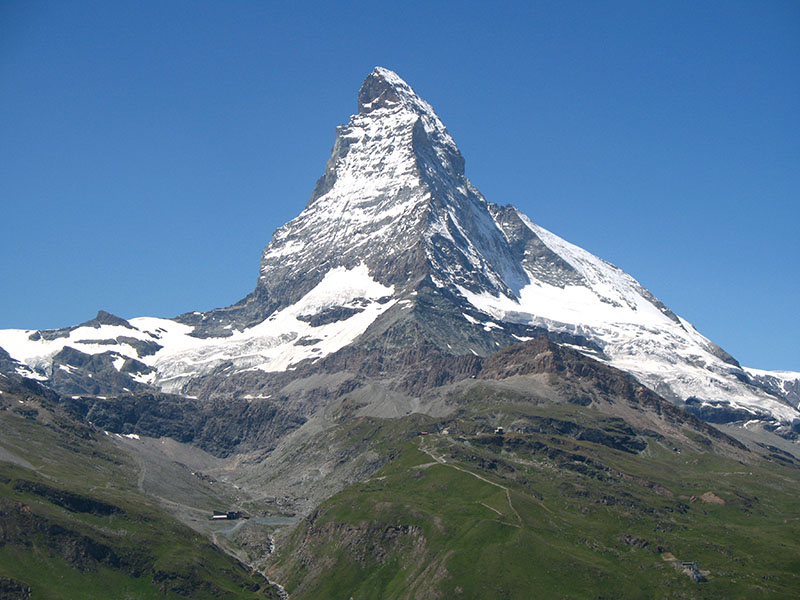 The Matterhorn. Wikimedia Commons. Few countries are so intimately linked to their geology than Switzerland. The Alps tower over much of the nation along with the Jura Mountains (who gave the "Jurassic" it's name) in the northwest. Zurich and Bern lie within a basin filled with debris shed off the Alps as they grew and some of that erosion is evidence in the glacial horns that remain, such as the famed Matterhorn. The Central and Southern Alps are a product of Eurasia and Africa colliding. VOTE IN GROUP E!Group FGermany 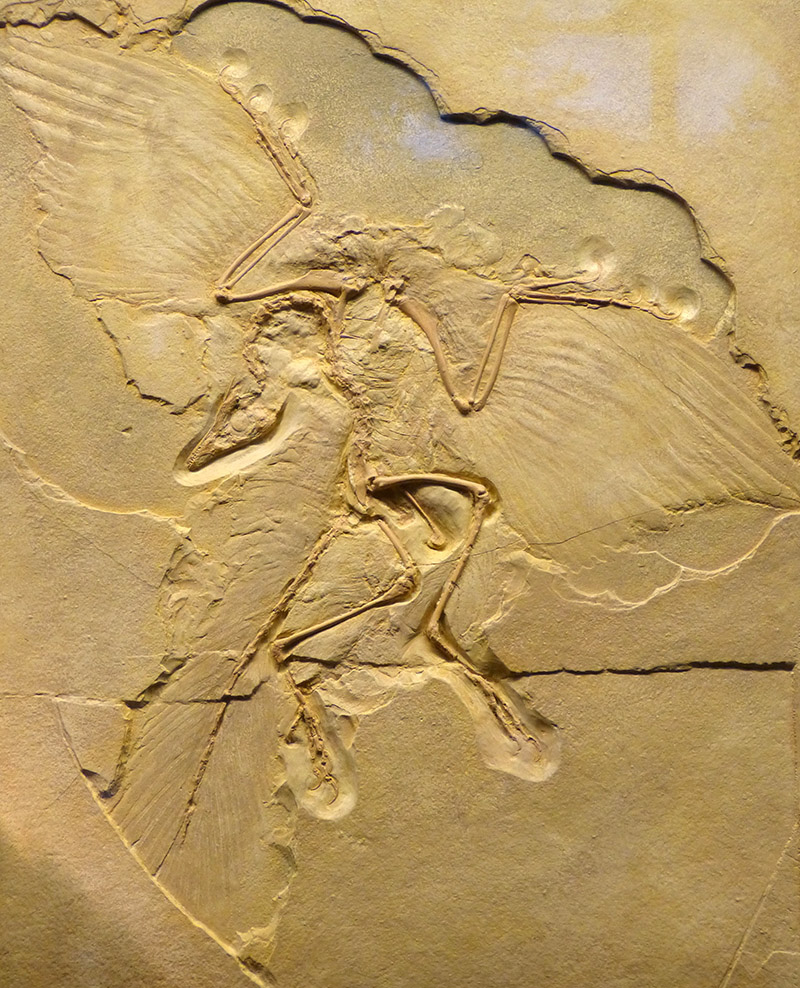 Archaeopteryx fossil with impressions of feathers found in Solnhofen, Germany. Wikimedia Commons. Most people don't know that Germany has a violent and recent volcanic history. One of my favorite sites in the Laacher See, a lake formed by a massive explosive eruption that happened only 12,000 years ago and sent ash out over the Baltic Sea into Scandinavian. This is all related to the Rhine Graben, an area where Eurasia attempted to split apart during the Eocene (30-50 million years ago). Germany is also famous for some of the most spectacular dinosaur and winged reptile fossils in the world, including the archaeopteryx. Mexico 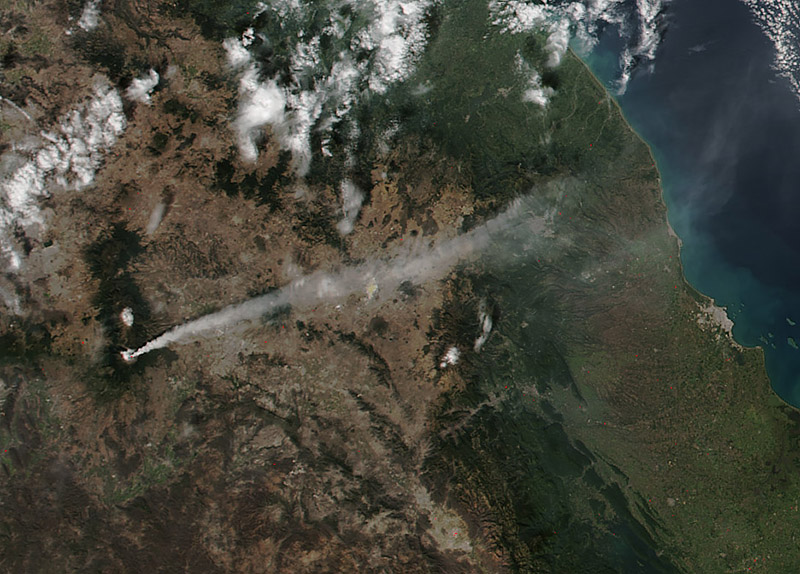 A steam-and-ash plume from Popocatépetl in Mexico from 2016. NASA Earth Observatory. The first things that might pop to mind when you think about Mexico's geology are volcanoes and earthquakes. However, probably the most important feature might be the buried Chicxulub crater under the Yucatan Peninsula and Gulf of Mexico. This is seen as the smoking gun for the asteroid impact that may have done in the dinosaurs at the end of the Cretaceous. Mexico is also a resource-rich country, with significant oil and natural gas reserves. The limestone of the country is also riddled with caves, including the stunning Sótano de las Golodrinas. South Korea 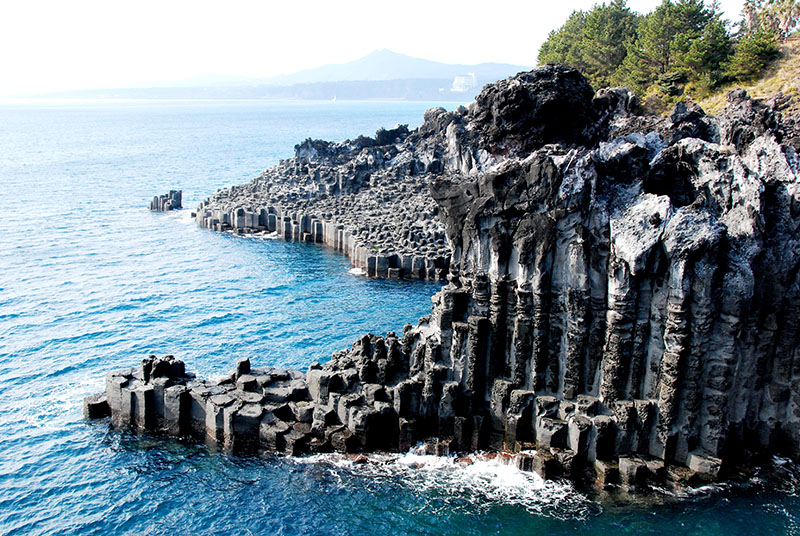 Columnar basalt on the Jejudo Coast of South Korea. Wikimedia Commons. South Korea is a surprisingly seismically-active country. Over the last few thousand years, there have been a dozen earthquakes that were M5 or greater, including the M7.5 Yangyang temblor in 1681 that generated a tsunami. Halla, on Jeju Island to the south of the Korean Peninsula, in a potentially active volcano that erupted as recently as 1007 AD. Much of the country is underlain by crystalline igneous rocks like granite formed since the Cretaceous (65 million years ago). Sweden 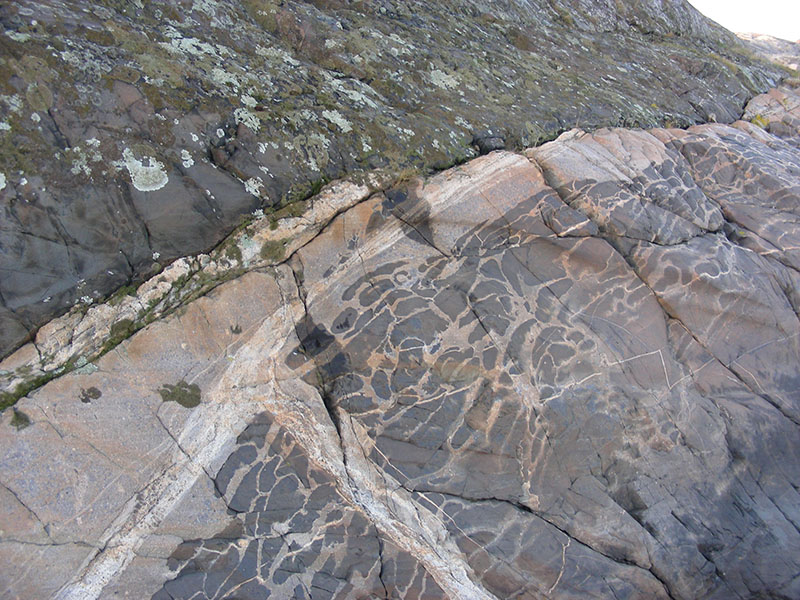 Precambrian magma mixing at Kosterhavet National Park in Sweden. Wikimedia Commons. The rocks of Sweden are old. The country lies mostly on the Fennoscandian Shield, the core of ancient rocks for that part of Eurasia. The bedrock of Sweden is dominantly 1-2.5 billion years old and the most recent tectonic event to impact the country was the Caledonian orogeny, about half a billion years ago. However, that doesn't mean that nothing has been happening. Much of the country is covered in glacial till, the produce of the vast ice sheet that covered Scandinavia during the last glacial maximum ~26,000 years ago. The current landscape was carved by these massive glaciers. VOTE FOR GROUP F!