Vital Signs: Saving One Life in the Carnage of the Haitian Earthquake

One woman remains brave in the face of life-threatening injuries, while an urgent medical response swings into action. 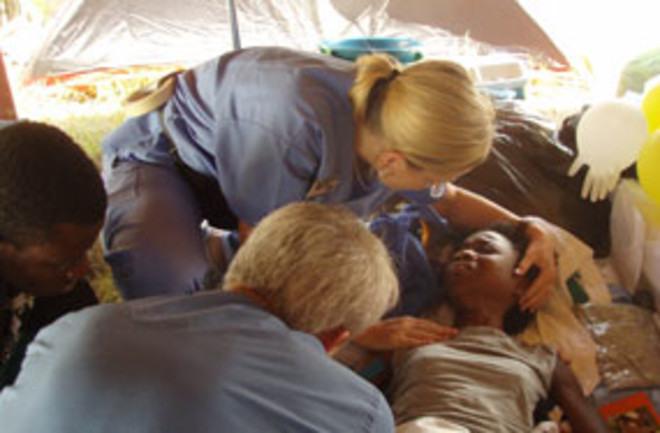 At the Jimaní clinic, nurses (including the author's wife, Patty,top) treat a patient with a severe leg injury. | Image: Lee Kagan

We had been working 14-hour days in the makeshift intensive care unit at the Buen Samaritano clinic on the outskirts of Jimaní in the Dominican Republic, and none of us had ever before seen, much less been responsible for, a unit so laden with human misery. Twelve days earlier, on January 12, the magnitude 7.0 earthquake had leveled much of Port-au-Prince, Haiti. Within 24 hours hundreds of refugees fleeing the devastated city had begun crossing the border into this sleepy Dominican town, an hour and a half east of Port-au-Prince by car, seeking medical care. The clinic and orphanage compound where my wife, a critical care nurse, and I were volunteering (along with 200 other medical workers) was overwhelmed in a matter of days.

The survivors of the quake had been brought to the clinic from Haiti in all manner of conveyance, including the backs of dump trucks. Most had suffered major trauma: broken limbs, often with open fractures; deep abrasions; and crush injuries everywhere from falling building blocks and debris. Their wounds had gone untended for days. Resources at the rural Jimaní clinic, built several years earlier as an outpatient facility for the impoverished surrounding communities, were limited. But five improvised operating rooms had been running around the clock, staffed by volunteers from all over the world. The week before we arrived, surgeons at the clinic had performed 120 amputations, and scores of fractures had been stabilized with external pins set into bones and then fixed in place by metal rods attached to the pins. Amazingly, the orthopedic and trauma surgeons had done everything to that point without benefit of X-rays.

By the time we arrived at the beginning of the second week, what must have been a frenzied scene straight out of M*A*S*H had begun to give way to a less frenetic though still extremely busy hospital setting. The orphanage, an open-air chapel, and a large tent sheltered more than 300 patients, plus another 500 family members. In the chapel they lay with their bandaged stumps and orthopedic hardware on mattresses and blankets that covered a bare cement floor. Relatives looked after loved ones and helped tend orphaned children on nearby mats. Nurses and doctors had to drop down on their knees to restart malfunctioning IVs, change dressings, or just lay a comforting hand on a frightened child’s brow.

Now word came to us that over in the chapel an elderly woman with congestive heart failure was experiencing chest pain. Doctors and nurses had been looking after her for four days, but her pain had increased, so the chapel staff was transferring her into our unit for an electrocardiogram (EKG) and more intensive treatment. We added her name to our patient list and waited for her to be brought over.

Madame Solange, a gray-haired Haitian, soon arrived with a stoic, even distracted, expression on her face. “She needs an EKG,” said the harried cardiologist who accompanied her. “I think some Lasix [a potent diuretic used to treat heart failure] will have her feeling better.” As she lay on her cot, I bent over and listened with my stethoscope to her right lung, but I heard no rales, the fine gurgling sounds of water loose within the lung’s air spaces. Puzzled, I asked the cardiologist why he thought she had heart failure. As he turned to hurry back to the chapel, he told me that he’d heard an “S3.” An S3 is an extra heart sound that frequently occurs when the heart is failing as a pump. It is often a subtle finding, hard to detect even in an optimal setting, let alone a busy field hospital. I resumed my exam and moved my stethoscope over to her left chest, where I listened and heard nothing. Literally nothing: no rales, no breath sounds, nothing. She wasn’t moving air on that side. I quickly percussed both sides of her chest, pressing a finger against her ribs and tapping it with a fingertip of my other hand. I heard the normal hollow resonance of an inflated lung on the right but got a dull thud on the left. Something was seriously wrong.

My colleague and I carefully helped Madame Solange sit up. With a few additional diagnostic maneuvers—percussing, listening, and feeling her chest—we determined that the dull thud was the result of her left chest cavity’s having filled up with fluid. Although it would have been nice to confirm this with an X-ray, we were confident of our findings. But why was there fluid in her left chest? We laid her back down on the cot, and I began examining her chest wall. Pushing sequentially on her ribs, I was surprised to find an area of tenderness at the point where an upper rib joined her sternum. I felt it click under the pressure of my fingers. “Fractured,” I thought, quickly scanning her chest once more for evidence of trauma. There was none—no abrasions, no cuts, no bruises. So what had caused a rib separation?

At this point Madame Solange’s son appeared at the bedside, and through a Creole translator he described how during the earthquake he had watched “blocks hit her on the chest” as their home collapsed. I looked again at her chest, and this time I moved her pendulous left breast aside. There it was: extensive bruising that had been hidden beneath it.

“Look,” my colleague said as he watched her breathing. With each inhalation her rib cage expanded, and though her right chest moved up, paradoxically, her left chest moved down. “Flail chest,” we said in unison. As an internist I rarely dealt with trauma and hadn’t seen a flailing chest since my training days, but it’s something you never forget. Somewhere in her rib cage, Madame Solange had enough fractures to mechanically separate a portion of her ribs from the rest of the chest wall. That part “flailed,” moving freely during respiration in a direction opposite that of the rest of the chest wall. As a result, when she breathed in, the detached portion retracted inward. It rendered the pumping motion of her left chest useless, so her left lung was simply not inflating. In the week and a half since the quake, her left chest cavity had filled with fluid, compressing and collapsing her lung on that side.

Flail chest is a potentially life-threatening situation. What struck us as we stood at her bedside was how resilient this woman was in the face of such a serious injury. Her vital signs were remarkably stable, apart from a modest increase in her heart and respiratory rates. Her oxygen level was within the normal range. But she was elderly. How long could this tenuous state hold?

I did an EKG with the machine one of the volunteer groups had brought to the clinic and confirmed that my patient had no bruising of her heart muscle. Her heart, in fact, was fine. Her chest pain was due to trauma, not angina. What she needed now wasn’t a dose of Lasix but a move to a more sophisticated facility, where a tube could be placed into her left chest cavity to drain the fluid and expand the lung.

Through her son and the interpreter, we explained our findings to Madame Solange. She seemed to understand but remained oddly impassive. I realized that what at first glance had appeared to be a stoic demeanor was in fact the stunned, flat, bottled-up affect of someone who has recently survived serious trauma. It is a common early response to overwhelming emotions so far outside the usual range that they must be repressed. In fact, it was the dominant emotional tone that I had seen throughout Buen Samaritano. At the gentle urging of her son, Madame Solange agreed to the transfer and took her place on the waiting list of those who needed urgent transport to a better-equipped facility.

And wait she did. Many of our most seriously injured patients had been waiting days for a flight out, held back by red tape, poor communication, and helicopters that didn’t show up when they were supposed to. The frustration of those delays was but one note in the overwhelming cacophony of feelings we had to contend with every day. From the get-go the professional in me told me to just hunker down and do my job, and I quickly found that concentrating on what I did best helped create a zone of clarity for me amid a sea of people who had been brutalized by the forces of nature.

Wherever I looked, volunteers from every corner of the map moved about the place, intent on tasks whose purpose I could often only guess at. It was unsettling at first, this pervasive sense of controlled chaos. But in time I grew comfortable with not knowing who everyone was or what everyone was doing. In the end it all somehow seemed to fit together.

The evening after I first met Madame Solange, I telephoned my daughter in New York and found myself fighting back tears before I could talk to her. The image of my daughter’s happy face, clean and healthy, safe and comfortable—it was everything this place was not. The feeling welled up in me not because of any particular injury I had seen or story I had heard, but for the global burden of misfortune now surrounding me. Many people I spoke with told me that at some point they’d had to find a private moment to have their cry and then go on with their jobs.

A day and a half later, our transport coordinator arranged clearance for Madame Solange to travel via ambulance to a hospital in the town of Jimaní proper, where doctors would be able to insert a chest tube and apply continuous suction. The suction was essential for keeping the left lung inflated, and since we didn’t have the necessary equipment at our clinic, we were not able to place the tube ourselves.

Two days after Madame Solange’s transfer, my colleague hopped a ride over to Jimaní and paid her a visit. An X-ray taken there had revealed fractures in the posterior portions of five ribs, damage that we had only been able to infer. Chest tube drainage had removed all of her chest fluid. “She was sitting up, feeling a whole lot better, eating ice cream,” he reported back to us.

The news that our patient was doing so well put smiles on our faces. We were pleased and relieved that from so much misery we had been able to extract one more victory. Still, with temperatures at the clinic pushing 90 all week, I cannot deny that our smiles may also have been due, at least a wee bit, to the thought of someone’s eating ice cream here in Jimaní.

H. Lee Kagan is an internist in Los Angeles who participated in the Haiti recovery as a volunteer with the International Medical Alliance (www.imaonline.org). The cases described in Vital Signs are real, but patients’ names and other details have been changed.