Virgin Galactic's SpaceShipTwo Just Made its Second Trip to Space 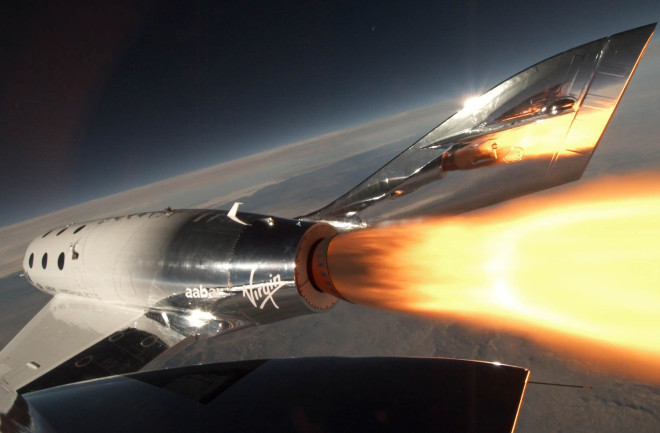 SpaceShipTwo is carried into the air on the back of a plane, but then takes off into space under its own power. (Credit: Virgin Galactic) On Friday, Virgin Galactic’s SpaceShipTwo flew in space for the second time, taking off from Mojave, California after days of weather delay. SpaceShipTwo took off at 8:07 a.m. PST carrying two pilots, a crewmember, and a nearly full weight of science projects from NASA. Unlike most spaceflights that fire rockets from the ground, SpaceShipTwo is carried on the belly of a plane named WhiteKnightTwo before being released to propel itself into the upper atmosphere. After being carried 45,000 feet into the air, SpaceShipTwo successfully fired its rocket engine and reached suborbital space at approximately 8:55 a.m. PST. It coasted there for only a few minutes before heading back toward the ground, where it landed much like any other plane, roughly an hour after takeoff. Like all of SpaceShipTwo's planned flights, this one was suborbital, meaning it does not reach orbit, and attains weightlessness for only a few minutes during its trip. SpaceShipTwo made its maiden space voyage in December 2018, and today was its fifth powered flight in total. Unlike other private spaceflight companies like SpaceX, Virgin Galactic has made their main goal ferrying private citizens into space, and have been taking reservations for years. The third crewmember today was Virgin Galactic’s Chief Astronaut Instructor and cabin evaluation lead. Her job today was to see how SpaceShipTwo feels from the cabin. Eventually, Virgin Galactic hopes to seat six passengers in place of the science payloads - or alongside them. The spacecraft today also carried research projects from NASA’s Flight Opportunities program, which pairs research institutions with private companies who can fly their projects into space. The combined weight of the payloads put SpaceShipTwo at close to, but just under, the requirements for the commercial launch weight that NASA has specified. One of Virgin Galactic’s goals during this flight was testing how the vehicle flies with a greater weight distribution. Details will likely come later, but the flight was successful, which bodes well for the craft’s future in ferrying cargo as well as passengers.