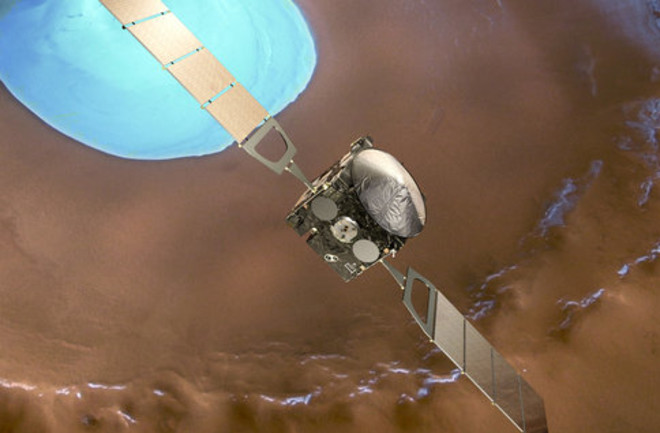 Mars Express illustrated above the Red Planet. Courtesy ESA. The European Space Agency's Mars Express orbiter may not be as often in the limelight as its charming terrestrial equivalent, Curiosity (I mean, it doesn't even have a Twitter account), but it's gotten some fresh appreciation this week with the release of an amazing flyover animation of the Red Planet. The scenes are constructed from topographical data the orbiter has collected over the past 10 years, as it's circled the planet more than 12,000 times. As you fly, see if you can spot Olympus Mons, the tallest volcano in our solar system, and Valles Marineris, a series of canyons that spans nearly 20 percent of the entire planet's surface. http://youtu.be/x0F4fCNBVAw These data came from the spacecraft's High Resolution Stereo Camera, which has been imaging the entire planet in full color, 3D and with a resolution of about 10 meters---and even more fine-grained than that in some spots. In addition to taking images, the orbiter has been using spectrometry to analyze the chemistry of Mars' surface and atmosphere, and probing the planet's structure with radio waves. The resulting data are interesting---but not nearly as breathtaking as these visuals.