The transit is directing attention to the oft-ignored neighbor that could teach us a lot about our own world—with some important implications for climate change. 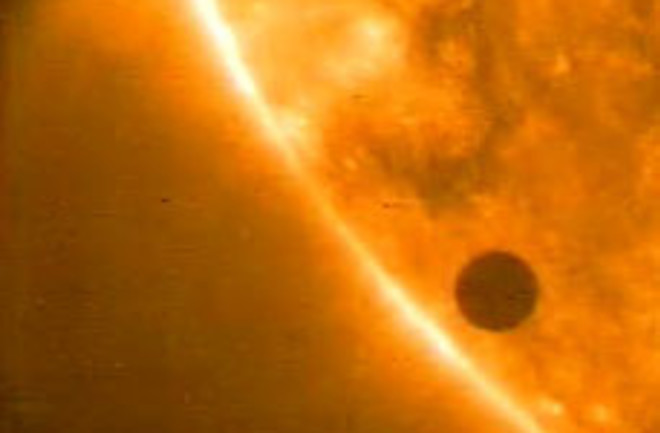 Also see Mark Anderson's explanation of why the transit is a critical time for learning to study the atmospheres of other planets.

On the afternoon of June 5 in the United States, a small black dot will crawl across the blazing face of the sun in one of the rarest celestial events: a transit of Venus, when our sister planet passes between us and our star. It won’t happen again for 105 years.

That dot is our closest planetary neighbor and, in many ways, Earth’s near-twin. Venus is 7,521 miles in diameter, just 5 percent smaller. It has an iron core and a thick, heat-trapping atmosphere. It orbits at about three-quarters the distance between Earth and the sun. If astronomers spotted such a planet orbiting another star, they would conclude it was an ideal place to search for life.

But in other ways, Venus is as enigmatic as that black dot against the sun. It is perpetually shrouded in dense clouds of sulfuric acid. The spacecraft that have explored it found no oceans, no protective magnetic field, and no active geology. The handful of old Soviet probes that descended to the planet’s surface perished in an hour or two, destroyed by the 900-degree Fahrenheit temperature (hot enough to melt lead) and atmospheric pressure 90 times that on Earth.

Venus’s contradictions lend it an unmistakable allure: How did a world so similar to our own turn out so different? The answers could tell a lot about the history of the solar system, about where to look for life in other planetary systems, and even about the future of Earth.

Astronomers believe that Earth and Venus were much more like twins when they formed 4.5 billion years ago. Back then the sun was dimmer, and Venus apparently was cooler. Studies of hydrogen molecules in the Venusian atmosphere by NASA’s Pioneer-Venus probe indicate that the planet once had liquid water on its surface, perhaps even expansive oceans.

Life could have started and thrived under those conditions, says planetary scientist David Grinspoon of the Denver Museum of Nature & Science. But at some unknown point in its history, Venus reached a tipping point. The planet overheated and water on the surface rapidly evaporated, filling the atmosphere with water vapor; the vapor trapped more heat, which caused more evaporation, and so on. “It’s a positive feedback loop,” Grinspoon says. “The oceans basically boil.”

From Identical to Evil

Planetary scientists still have to sort out exactly how Venus reached the point of no return. Grinspoon points to one important factor: its distance from the sun. Being 28 percent closer than Earth means that Venus receives about twice as much solar energy. Astronomers think that as the sun gradually grew hotter, it pushed Venus to a threshold temperature that set the runaway greenhouse effect in motion.

To confirm that hypothesis, scientists need to know how Earth-like Venus started out, and then how it transformed from temperate to unbearable. They want to understand how an atmosphere once rich in oxygen evolved into a layer of smothering gases, mostly carbon dioxide.

Determining exactly how Venus went over the edge would clarify whether Venus is the oddity—or Earth is. Last December scientists working with the Kepler space telescope discovered the mission’s first planet in the “habitable zone” around another star, the location where temperatures could be mild enough to allow liquid water on a planet’s surface. Kepler’s goal is to determine the frequency of Earth-size planets in the habitable zones of stars; the news stirred hope that habitable planets are common throughout the galaxy.

But Venus too is an Earth-size planet tucked just within the habitable zone. If not for its thick atmosphere, Venus’s surface would be cool enough to support liquid water. To seek out signs of life on other worlds, astronomers need to learn how to distinguish between planets with Earth-like climates and those that are more like Venus. “That’s why we’re interested in Venus,” says Larry Esposito, a planetary scientist at the University of Colorado at Boulder. “We want to know: Throughout the universe, how many planets are good like us, or how many are evil like Venus?”

Understanding how good planets can go bad is also important for evaluating the future of our own world. Right now Earth is warming, and the chemistry of its atmosphere is changing. Scientists would love to take a detailed survey of Venus’s atmosphere and use it to improve climate models of Earth. Venus may have many lessons to teach us about keeping Earth cool and habitable. In the very long term, Venus might be our destiny no matter what we do. In a billion years or two, the ever-brightening sun may send Earth past its tipping point too.

With so much at stake, you might think that the nearest planet in the solar system would be a prime target for exploration. But it’s quite the opposite. NASA has not sent a spacecraft to Venus since 1989, when the Magellan probe made detailed radar maps of the surface hidden under those sulfurous clouds. Researchers trying to make sense of Earth’s sister world have to rely on those 20-year-old maps and on 30-year-old grainy photos from the Soviet landers. The European Venus Express satellite is currently in orbit around the planet, but it can take only indirect measurements of conditions beneath the clouds. If we really want to peel the layers off the mysterious planet, we need ambitious missions to explore the atmosphere and surface.

We have the technology to do that. Grinspoon envisions a balloon-borne craft that would drift through Venus’s dense atmosphere, sniffing the gases throughout its journey to gather data about the planet’s climatic history. The spacecraft could release smaller floating instruments that would search for microbes surviving in the clouds. Unlikely as it may seem, certain bacteria thrive under similar conditions on Earth. Perhaps some ancient Venusian inhabitants live on.

Developing a long-lived rover that could explore Venus’s surface is a greater challenge—the circuitry in current interplanetary spacecraft would quickly fry there. Geoffrey Landis at NASA’s Glenn Research Center in Cleveland thinks he can solve that problem with electronics made of silicon carbide (the material in sandpaper) that can operate for weeks in 900-degree temperatures. The technology, originally developed to function inside jet engines, could be available for an interplanetary mission within a few years.

Like Spirit and Opportunity, the robots that have successfully roamed on Mars, Landis’s long-range rover would have a mechanical arm to study rocks and a high-resolution camera. Landis has even picked a potential landing site for his heatproof creation: Maxwell Montes, a strangely radar-reflective mountain range, where the iron-rich surface may have interacted with sulfuric acid to form a coating of fool’s gold.

Right now NASA is moving the other way, pulling funds away from planetary exploration as its budget dwindles. But a Venus mission is exactly the type of high-frontier undertaking that could reignite the passion the agency once inspired.

“This is what NASA should be doing: pushing the edge and doing things nobody else can do,” Landis says. Venus is the perfect place to do that, especially with so much at stake and so much left to learn. Venus, Landis says, “is so unexplored that we don’t even know what we need to know.”

Paul Raeburn writes about science, culture, and policy, and he blogs for the Knight Science Journalism Tracker. He is a frequent contributor to DISCOVER.