Updates on Eruptions in Iceland and Rabaul 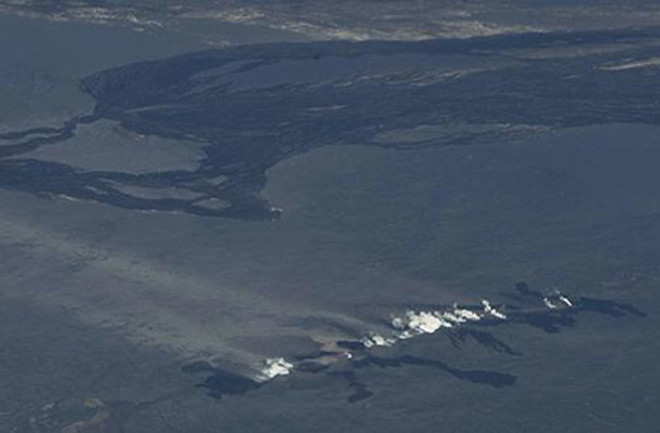 The ~0.6 km fissure eruption from the Holuhraun lava fields in Iceland. Small lava flows (dark black in foreground only) and degassing (white steam and volcanic plumes) show the extent of last night's eruption. Photo by Almannavarnir Iceland / Twitter. Yesterday we had two eruptions grab everyone's attention - one from the area that has had everyone's attention between Iceland's Bárðarbunga and Askja in the Holuhraun lava field and one unexpected eruption from the Tavurvur cone in the Rabaul Caldera of Papua New Guinea. The Icelandic eruption that everyone has been waiting for ended up being small, lasting ~3-4 hours and producing lava flows and spatter ramparts. Video of this morning's flyover show a linear fissure about 0.6 km long (see above) that is still degassing strongly, but no lava is currently erupting. A shot of the eruption site (see above) released today clearly shows the short lava flow tongues that issued from the fissure during the brief eruption. Right now, there is no threat at all to aviation and even during the height of the eruption last night, the explosivity was low. The IMO has lowered the aviation alert level back to orange and briefly raising it to red during the eruption last night. The latest statement from the IMO says that they are still unsure how the eruption may proceed: this might be it or new fissures may open in the area as more magma reaches the surface. The same can't be said for the ongoing eruption from the Rabaul caldera, an eruption that was not expected. The Tavurvur cone has been producing impressive explosive eruptions that has caused some international flights to alter their flightpaths to avoid the copious ash. Unlike the Icelandic eruption, this eruption is occurring right next to a city of nearly 20,000 people, so the threat to life and property is much higher. In fact, the 1994 eruption of Rabaul came close to destroying the city, so this sort of intense eruption from Tavurvur can have very real consequences for the people living near the volcano - and the current activity has led to evacuations of some of the villages nearby. You can check out a brief video of the intense strombolian eruption from yesterday while galleries of the eruption show the impressive ash plume from the eruption that spread mostly to the southwest and southeast. The Rabaul eruption is probably the one to watch most closely because the Rabaul caldera has a history of explosive eruptions and is much closer to populated area. Right now, the Icelandic eruption is about a benign as an eruption can be: it is in a remote area and has been lava flows with some lava fountains. The Icelandic events have definitely captured the public's imagination, but in terms of real world volcanic hazards, Rabaul is the real threat.