Researchers thought Mars formed — and potentially created a life-supporting atmosphere — like Earth did. 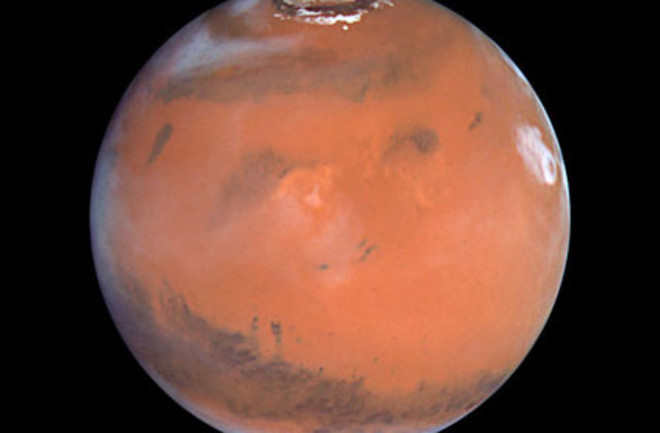 At least once in its past, Earth existed as a roiling ball of molten rock that might have had the consistency of room-temperature oil, but would been untouchable at some 2,000 degrees Fahrenheit.

As magma oceans ebbed and flowed, the tumult might have launched elements conducive for life out of the rock and into our atmosphere. Researchers previously thought that maybe similar fluid dynamics — and the resulting spewing of life-supporting materials — likewise happened on Mars. But new research suggests that's not the case.

“We’ve had so little time to think about how a planet would evolve without a melting step, it’s hard to tell if this is a net positive or net negative for [the possibility of] life,” says Francis McCubbin, a NASA national materials coordinator and researcher who co-authored the new research.

By studying meteorites that came from Mars, McCubbin and his colleagues determined that the planet hosts two regions where the rock contains different ratios of hydrogen varieties. If the planet had once been awash in liquid rock, the same ratio of hydrogen types would be found all over the place, the team concluded in their Nature Geoscience paper.

Hydrogen analysis is one way to figure out whether Mars ever had a global magma ocean, McCubbin says. Other, yet-unstudied chemical systems on the planet could reveal ocean formation. That’s part of why McCubbin says it’s too early to consider this finding a thumbs-down for the possibility of life on Mars — and why their team plans to keep looking for signs of a once-liquid planet.

Before our solar system had planets, it had dust and gas. When those particles started clumping together, researchers think the clumps collided again and again until entire planets formed. Eventually, the clusters melted into an ocean of magma. Like a blender mixing strawberries and bananas into a smoothie, liquifying would swirl all the deposits from the early solar system together. The process would also churn material from inside the planet core and release it into the atmosphere, McCubbin says, including elements and chemicals necessary for life.

McCubbin and his colleagues, including first author Jessica Barnes, a University of Arizona cosmochemist whom McCubbin calls a “rock star” in the field, studied whether that potentially life-giving magma formed by first looking at two meteorites. These rock chunks are pieces of Mars’ surface, or crust, that crash-landed in Africa and Antarctica. Researchers have calculated that one last interacted with martian water 3.9 billion years ago, and the other 1.5 billion years ago.

McCubbin and his team found that there are different versions of hydrogen in those two rocks, and that the proportions of each element variety are similar. A comparable hydrogen ratio also appears in more recent examinations of the planet’s crust, including in data from the Mars rover Curiosity. When the team compared all this information to Mars meteorites that originated from a deeper rocky layer in the planet, however, they saw something else. The hydrogen ratios in the deeper samples didn’t share the same ratio.

Other Clues of Planetary Churning

Two mixes of hydrogen varieties suggest two spots of water formation on Mars that didn’t ever meet, and that subsurface, molten churns never happened. “A lot of what could have nurtured life in the atmosphere didn’t get there — maybe,” McCubbin says.

There are other ways material from the core of Mars could have reached the atmosphere, like constant volcanic activity or hydrothermal vents, McCubbin says. Additionally, planetary scientists need to look at other chemicals on Mars and see if they counter the hydrogen finds and support the concept of a magma ocean.

This research project relied heavily on studies from a range of meteorites — “it was sort of fortuitous that we could take a lot of data and compare them to our crustal samples,” McCubbin says. Future work will need to keep analyzing a whole suite of Mars samples. But don’t worry: NASA adds new Mars meteorites to their collection on a regular basis, McCubbin says. We’re retrieving more from Mars, too. The Perseverance rover will hit the planet to search for life in 2021, while another project might bring rock samples back a decade later.

If all goes according to plan, the team won’t be running low on samples to help them assess the Red Planet’s past anytime soon.