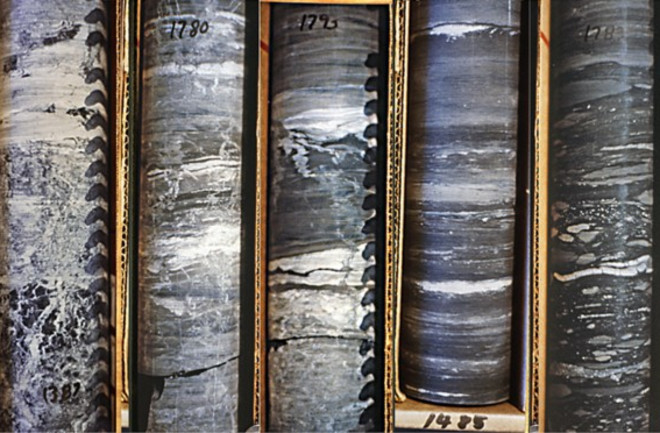 Examples of the cores drilled show material laid down in shallow water on the left to deep water on the right. (Credit: Paul E. Olsen) Our solar system is a chaotic place – literally. Rewinding orbital possibilities quickly becomes too complex and too numerous for astronomers to calculate. That means we only know the orbital movements of Earth and the other planets over the past 60 million years or so. To look further back, scientists are pulling core samples from deep under Earth’s surface to examine long-ago climate change and learn about how the planets moved hundreds of millions of years ago. Scientists used two core samples drilled from deep underground to study a period in Earth’s history from about 199 to 223 million years ago. These samples provide a window into the distant past. Through this window, researchers can measure periods of warmth and cold, wet and dry, and changing carbon dioxide levels.

On certain long time scales, these changes in Earth’s climate can tell astronomers how the planet’s orbit has changed, and how the orbits of the other rocky planets have influenced our own. Specifically, astronomers look how each of these planets’ perihelion – their point of closest approach to the sun – shifts over millions of years. Because they all affect each other, these cycles of the planets get complicated over tens and especially hundreds of millions of years. Astronomers use a mathematical trick called a Fourier transform to break down the overall climate trend they measure into many individual cycles that they can trace to the planets’ orbits and movements. Astronomers can compare the cycles they spy through this window of time to the many possibilities produced by mathematical models of the current solar system. This majorly narrows down the options, since only patterns that fit both the distant past and the present can be true. But it still leaves multiple options for how the planets move. Researchers explored those options in a paper published March 4 in the

Proceedings of the National Academy of Sciences

. Next, the team hopes to gather more core samples. Some of these might be from times between 60 million years (the mathematical limit of accuracy) and the 199-million-year edge of their past knowledge, to open more windows into the past. Lead author Paul Olsen says that more information can also be gleaned by extending the locations of where they gather their core samples: “We need a high latitude record, near the Arctic or Antarctic circle. That would constrain all of the orbital parameters of the inner planets. At low latitudes you get the Earth's axial wobble and the changing point of perihelion. From high latitudes you get the changes in the angle of the earth's axis [the tilt of the Earth that causes seasons].” By examining cores from both locations, researchers can gain a deeper understanding of how Earth’s orbital movements have affected its long-term climate history.