Um... That "Goldilocks" Exoplanet May Not Exist 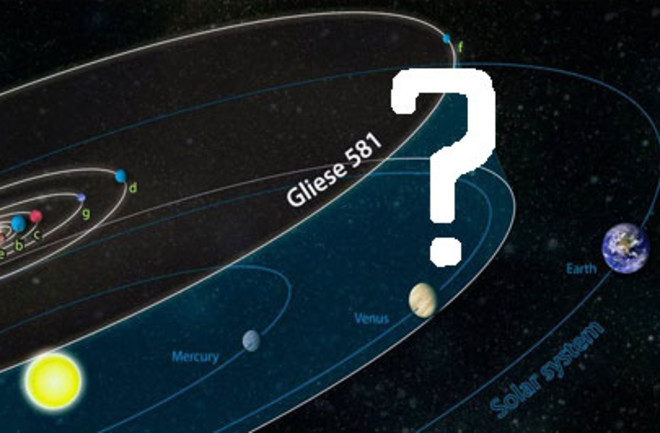 A group of Swiss astronomers announced yesterday at the International Astronomical Union's annual meeting in Turin, Italy, that they couldn't detect the "goldilocks" exoplanet found by U.S. researchers a few weeks ago. That news of that planet, dubbed Gliese 581g, generated much excitement, since researchers said it was only three times the size of Earth, and it appeared to lie in the habitable zone where liquid water could exist on the surface. It didn't take long for some cold water to be thrown on the astronomical community and the space-loving public. Presenter Francesco Pepe and his colleagues claim that it will be years before the data is clear enough to see such a planet.

"We do not see any evidence for a fifth planet ... as announced by Vogt et al.," Pepe wrote Science in an e-mail from the meeting. On the other hand, "we can't prove there is no fifth planet." No one yet has the required precision in their observations to prove the absence of such a small exoplanet, he notes. [ScienceNOW].

Such small planets are very hard to find. Astronomers discover these planets by calculating how they interact with the star they orbit, making it wiggle ever so slightly. The American team that identified the planet a few weeks ago saw the wiggles when analyzing a combination of two sets of data.

Astronomer Paul Butler, a member of the U.S. team who is at the Carnegie Institution for Science in Washington, D.C., says he can't comment on the Swiss work because he wasn't at the meeting and the data are unpublished. He notes, however, that more observations will likely be needed to solidify the existence of Gliese 581g. "I would expect that on the time scale of a year or two this should be settled." [ScienceNOW].

There will be more information available when the Swiss team releases its data and methods, but for now you might want to unpack your bags

. Related content: Bad Astronomy: Possible earthlike planet found in the Goldilocks zone of a nearby star!

Discoblog: So, How Long Would It Take to Travel to That Exciting New Exoplanet?