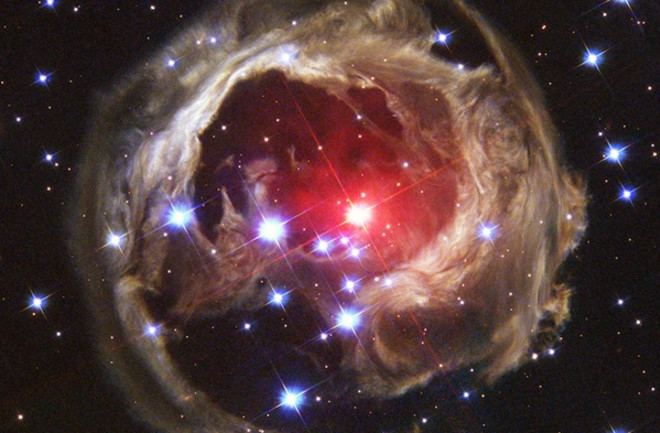 This image shows V838 Mon, which exploded as a "red nova" in January 2002, suddenly becoming 600,000 times brighter than our Sun. A similar explosion was expected to occur in 2022, but the unprecedented prediction recently fell through. (Credit: NASA and The Hubble Heritage Team/AURA/STScI)

This is exactly what just happened with one of the most anticipated astronomical events of the upcoming decade: the visible merger and fiery explosion of a pair of nearby binary stars in 2022.

Five years ago, Calvin College astronomy professor Larry Molnar and his team began analyzing a pair of tightly bound stars — known as KIC 9832227 — located just 1,800 light-years away in the constellation Cygnus the Swan. The researchers then bolstered their own observations with archival data from 1999, as well as data collected between 2007 and 2013.

Finally, in 2017, Molnar’s team came to an exciting conclusion: The stars are already tangled up in a complicated dance that will inevitably end with their merger and ensuing explosion in 2022. This first-of-its-kind prediction of a “red nova” event visible to the naked eye quickly made headlines around the world, captivating astronomy enthusiasts and astronomers alike.

But in a new study published today in The Astrophysical Journal Letters, another team of researchers led by Quentin Socia, a graduate student at San Diego State University, scrutinized Molnar’s original prediction, ultimately concluding that the prophesied explosion will not happen as planned.

And, just our luck, Molnar himself agrees.

“Good science makes testable predictions,” said Molnar in a press release. “There have been a few other papers that have tried to poke at our project, and we’ve been able to poke back — criticisms that just don’t fly. But this one does fly, and I think they have a good point. This illustrates how science can be self-correcting.”

To verify (or disprove) Molnar’s original prediction, Socia and his team concentrated on a gap in observational data — from 1999 to 2007 — for KIC 9832227. After obtaining previously unpublished data captured in 2003, the researchers discovered a curious discrepancy between when the two stars were expected to eclipse each other, and when they actually did. This led Socia to dig a little deeper.

When they turned their attention to meticulously analyzing the paper that described the 1999 data, they discovered a typo. The paper had incorrectly transcribed the time of an observed eclipse by precisely 12 hours. This innocent mistake threw off Molnar’s calculations for the timing of future eclipses.

Molnar’s original prediction of a 2022 merger was based off the apparent exponential decay of KIC 9832227’s orbital period. He then matched this slowing orbital period with models of previously seen mergers, finding that the slowing orbit falls in line with what would be expected from a pair of touching stars preparing to put on a show. However, since KIC 9832227’s orbital period is not changing quite as dramatically as Molnar first though, his model-based prediction no longer holds water.

So there you have it. Much to the chagrin of you, me, and professional astronomers from around the world, the heavily anticipated merger of two stars in 2022 will not occur. However, if there is a small ray of light we can pull from this disappointing news, it’s the fact that the foundational science that led to Molnar’s original prediction is still sound, so we will hopefully find — and exhaustively confirm — a new potential merger in the near future.