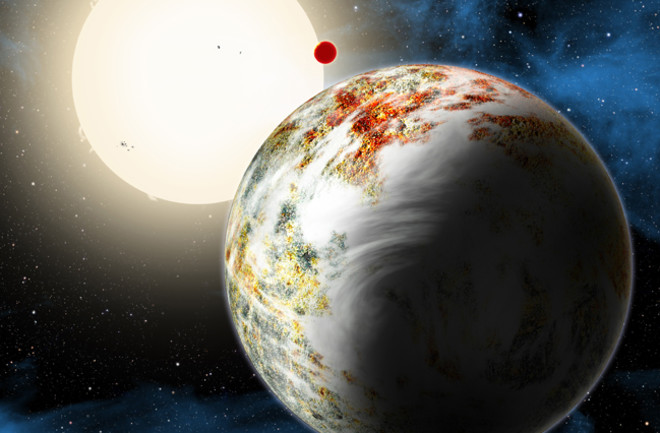 The newly discovered "mega-Earth" Kepler-10c dominates the foreground in this artist's conception. Credit: David A. Aguilar (CfA) The universe, we're learning, is a crowded place — which made it all the more appropriate that the latest findings about exoplanets were delivered today to a crowded press conference at the American Astronomical Society’s 224th meeting. The most intriguing discoveries provide evidence for two new types of planets that don't exist in our solar system: gas dwarfs and mega-Earths. These two classes mix up the general rule of thumb that planets are either small and rocky or large and gassy — adding their mirror images, small-gassy and large-rocky combinations respectively. In so doing, the findings overturn scientists’ assumptions about how a planet’s size predicts its composition, and thus about where we might find habitable worlds.

“Gas dwarfs,” planets roughly between Earth and Neptune in size, were detected by Lars A. Buchhave of the Harvard-Smithsonian Center for Astrophysics and his colleagues. Buchhave and colleagues examined data from more than 600 planets orbiting more than 400 stars, classifying them by size. They saw an expected dividing line at about 3.9 times Earth’s size: heavier planets were the Jupiter-like gas giants; lighter worlds were presumably rocky Earth-like planets. But, to their surprise, they saw another division in this group, at about 1.7 times Earth’s size. The smaller worlds were indeed rockier, Earth-like planets. But planets between 1.7 and 3.9 times the size of Earth represented a new class of planet — the gas dwarf, with a thick atmosphere of hydrogen and helium but a solid rocky core. The researchers also compared these divisions to a planet’s host star, and found that the different classes of planets also corresponded to their star’s metallicity. (Astronomers use the term ‘metal’ to mean any element heavier than hydrogen or helium.) Gas giants tend to form around stars rich in metals, gas dwarfs around less metal-rich stars, and terrestrial planets around a “sweet spot” of metal content very similar to the sun, lowest of all. That makes sense, since a planet’s own metallicity corresponds to its star's (they’re both made from the same cloud of gas and dust). Thus heavier, metallic planets would be most likely to gobble up any gas in the area, leading to metal-rich gas giants. Finally, Buchhave discussed how a planet’s size relates to world's proximity to its star: as that distance increases, so does the dividing line between rocky and gaseous. That means that, assuming it’s far enough away from a star, there’s no reason you can’t have “massively rocky planets,” as he put it. Since our current planet-hunting tech is biased toward smaller rocky worlds, that means we could be missing out on a whole class of exoplanets to hunt and study.

Meeting attendees also heard about a second newly discovered type of planet: a mega-Earth. Astronomers had long known of two worlds around the sunlike star named Kepler-10, but couldn’t learn much about the second one, Kepler-10c, except that it was about 2.3 times Earth’s size. But, thanks to new and more precise technology, they’ve finally been able to calculate its mass, and were in for a shock: this unassuming little world weighs more than 17 times as much as Earth. “It turns out to be a very, very massive solid planet,” said lead researcher Dimitar Sasselov, also of the CfA. “The proper way to call it is ‘something bigger than a super Earth.’ How about mega-Earth?” The hulking planet likely has the same basic composition as Earth, there’s just more of it there and it’s more tightly compressed. As for how a planet could grow so dense and massive without also acquiring enough nearby gas to become a gas giant, science has a succinct answer: We don’t know yet. But theorists are working on figuring that out, with findings like these providing more data to try to work out the details of planetary formation. The finding also bodes well for searches of truly habitable exoplanets, and possibly even extraterrestrial life. Kepler-10 and its planets are about 11 billion years old, twice as old as our solar system, and much earlier than scientists thought rocky worlds could form. Broadening the search to include such old worlds makes it that much more likely we’ll find a livable one.