Two Massive Eruptions in the Americas Hiding in Plain Sight

Two recent studies have improved our understanding of two truly enormous eruptions that happened in Central and South America. 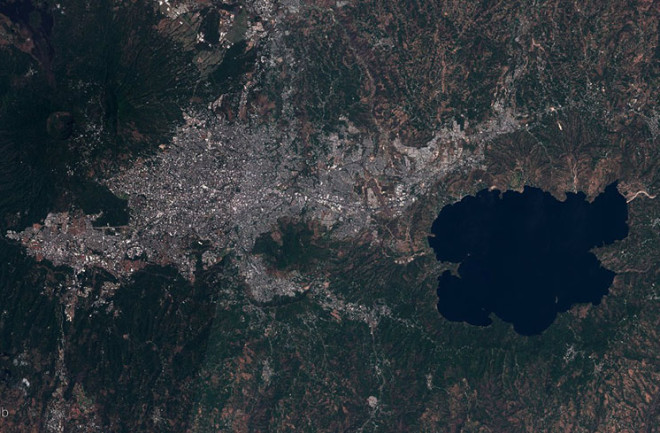 I am always amazed how much we are still discovering about massive volcanic eruptions that happened as little as a few thousand years ago. Geologically speaking, that is something that happened yesterday, yet even that small slice of time can obscure some giant volcanic events whose effects could have spread across the globe.

Two recent studies have improved our understanding of two truly enormous eruptions that happened in Central and South America. One, only 1,500 years ago, may have produced one of the tallest eruption plumes in the past 10,000 years while the other may have been one of the most voluminous blasts in that same period. In both cases, it took careful geologic field mapping and geochronology (dating) to unravel two events the likes of which we haven’t experienced in centuries.

The Ilopango Caldera in El Salvador is considered one of the most dangerous volcanoes on Earth. Not only is it only about 10 kilometers from San Salvador City, but over 3,000,000 people live within 30 kilometers of this monster. The volcano itself is a 13 kilometer by 17-kilometer hole in the ground that was produced by multiple caldera-forming eruptions over the past ~57,000 years. The current caldera is filled by a lake, which could potentially add to the explosivity of eruptions.

A recent study in the Journal of Volcanology and Geothermal Research by Dario Pedrazzi and others set out to quantify not only the total volume of the most recent colossal eruption from Ilopango, but also really understand how the eruption happened. What they found is that the eruption, which occurred sometime between 270-535 A.D., during the height of the Maya Classic Period in the region, was gigantic.

When all was said and done, the eruption likely produced an ash plume that towered 49 kilometers (160,000 feet) over the volcano! During its peak, the volcano was emitting 10^10 kg over volcanic debris per second ⁠— that’s over 100 Nimitz-class aircraft carriers per second. Pyroclastic flows spread for 40 kilometers from the volcano in all directions.

All told, if you compress all the air out of the volcanic ash and debris, Ilopango blasted 30 km^3 of magma (58 km^3 of uncompressed material). This would have been bad news for the Maya people living near Ilopango at the time and archaeologic record shows the area was depopulated for quite some time after the eruption. It is hard to imagine the devastation by such an eruption today, but the volcano last erupted, albeit in a much smaller fashion, only 140 years ago.

If we head south to Argentina, another recent study attempts to pick apart the details of another gargantuan eruption. Fernandez-Turiel and others in Estudios Geológicos looked at eruptions from Cerro Blanco in Argentina. This volcano sits on the edge of Altiplano-Puna, one of the most productive volcanic areas on the planet.

Much like Ilopango, Cerro Blanco is another volcano made of multiple collapsed calderas, the result of several massive eruptions. The best-known eruption from Cerro Blanco likely happened between 2391 and 2131 BC. This is well after humans arrived in South America, so people were likely around to witness this cataclysm.

Whereas Ilopango may have produced a taller eruption plume, Cerro Blanco seems to have it beaten in terms of volume of material erupted. Ash from the ~2300 BC eruption is found half a meter thick over 400 kilometers from the volcano while pyroclastic flow deposits choke river valleys for tens of kilometers. Based on the wind conditions at the time of the eruption, certain areas over 200 kilometers away saw meters of ash fall.

Using mapping of ash deposits near and far from Cerro Blanco, Fernandez-Turiel and others estimate this eruption may have dumped over 100 km^3 of volcanic debris (and possibly as high as 175 km^3) on the landscape. This is likely a low-end estimate, but even at 100 km^3, we’re looking at an eruption on the same scale or larger than Tambora in 1815, Crater Lake ~7,700 years ago or Santorini in ~1600 BC. It is startling to think that we are only today beginning to fully understand the size of some of these eruptions that happened within the past few thousand years.

However, this isn’t an uncommon occurrence. This summer, I am starting a project with a colleague from Oregon State University looking at similar huge eruptions that occurred in central Oregon from the Tumalo Volcanic Center.

Tumalo Tuff (top) and Bend Pumice (bottom) in an outcrop to the west of Bend, Oregon. (Credit: Erik Klemetti)

Now, we don’t think they are on the same scale as Cerro Blanco or Ilopango, but they could easily rival Pinatubo in 1991 and the possible source of these eruptions is ~10-15 kilometers from Bend, Oregon. One of our goals is to nail down exactly when these eruptions occurred, but right now we know they likely occurred between ~700,000 and 100,000 years ago.

All of this work is done with feet-on-the-ground mapping and sampling of volcanic units. You can do all the analytical work and modeling you like, but without that foundation of geologic mapping, we can’t start to really understand the volcanic events locked in these deposits.

The closer we look, the more often we find evidence of giant eruptions in our past – but that then allows us to be that much more prepared if an eruption on that scale happens again.