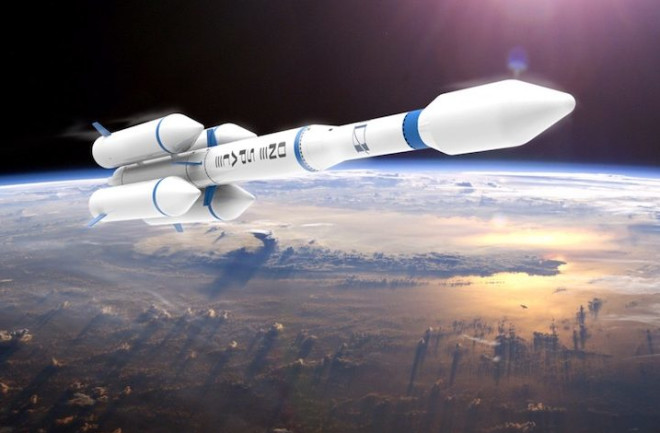 An illustration of OneSpace's OS-M rocket that they hope to use to successfully complete an orbital launch this year. (Credit: OneSpace)

Two Chinese private space companies are on the verge of attempting their first orbital launches, according to the space industry newssite SpaceNews. Companies OneSpace and iSpace aim to successfully complete orbital launches within the first half of 2019. The success of these launches would solidify the progress made by China’s growing private space sector.

Beijing-based OneSpace plans to launch their 62-foot-tall (19 meters) OS-M rocket as soon as late March. The four-stage rocket will carry a 452-pound (205 kilograms) payload to low-Earth orbit and a 161-pound (73 kg) payload to Sun-synchronous orbit (SSO) — a nearly polar orbit in which the payload is constantly illuminated by the sun. The rocket’s payload contents have not been disclosed.

If OneSpace successfully launches this rocket, it would be the first-ever successful orbital launch from a private Chinese company. However, this will not be the first attempt — another Chinese company, Landspace, attempted an orbital launch in October, but the rocket’s third stage failed its payload ended up falling into the Indian Ocean. Landspace has plans to launch again in 2020 with a larger, two-stage rocket.

These companies, alongside others in China’s commercial spaceflight sector, are supported by private funding in addition to funding from the State Administration for Science, Technology and Industry for National Defense (SASTIND), a government body that oversees space activities in China. The China National Space Administration’s primary space contractor, the China Aerospace Science and Technology Corporation, is both supporting China’s emerging private space companies as well as developing its own commercial launchers.