There's a little known--but not so private--tidbit about my arrival to the blogosphere that often raises eyebrows when I give talks. I started because I lost a bet. Really. You see, when I left grad school for DC, some of the undergrads I worked with implored me to blog. We regularly discussed science and politics in our seminar and they were eager to continue the conversation online. 'Me blog?! No way!' Admittedly, I didn't quite understand what a blog was back then. It seemed like the kind of activity for people with too much time on their hands... a hobby for those with the strange desire to report the hum-drum nuances of their day. Most of which involved complaining. 'This morning I brushed my teeth,' and that sort of thing. I was not about to foray into the blogosphere, but I finally agreed to 'when the Dems take back the House and Senate.' Because that was never going to happen! And so true to word, a week after November 7, 2006 I started a private blogspot to exchange ideas with the group. Go figure a few months later, Randy Olson would introduced me and Chris. The rest is history. And would you know it, blogging isn't all that bad. I've learned it can foster a very constructive dialog (or not) and serve as a bridge to communicate interesting subjects between fields and people. On the whole, for me it's also been cathartic. So many crazy ideas swirl around my head and getting them down for discussion online--especially turning them over with readers--has been a lot of fun. We've seen the rise of ScienceDebate.org and I've learned a good deal about writing and journalism over the years. By now I've come full circle. I'm converted. I blog, therefore I am. But. It turns out that what made me squeamish about the blogosphere actually does exist by way of another inexplicably popular medium. It's called TWITTER. 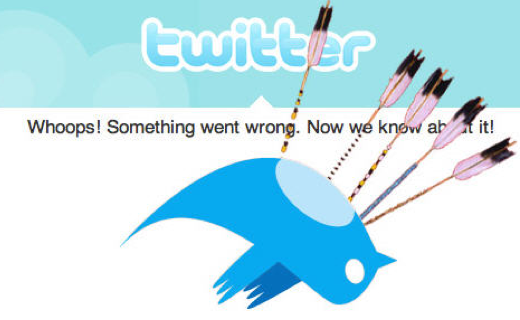 Can someone kindly explain to me why this strange breed of shadowing has any merit? I don't want to report where I am and what I'm doing every five minutes. Tweeters tell me it's all about sharing the news when they're doing really exciting stuff. Well, if I'm ever that excited--say, hanging with Billie Joe--I'm not going to be focused typing about it into my cell phone. And why do we assume that everyone 'following' tweets, chirps, or yelps cares to know exactly what we're up to? Furthermore, isn't it a little on the creepy side to allow people to 'follow' you? There's another term for that. Stalking. Authors and other writers tell me it's good to build a following. But Kurt Vonnegut didn't twitter. Neither will Captain Kirk. We live in strange times. No one has really come to terms with social networking. A wireless internet connection affords every kind of media not just streamed into your living room, but directly to your palm... 24 hours a day, 7 days a week. Craving extreme trucking from the Czech republic at 4 am? You got it! Welcome to generation ADD. We like our vodka sped up with Red Bull and expect reality TV stars to fall in love multiple times per season. We've surpassed sampling music and transitioned to remixing youtube. We've evolved into a culture that practices Guitar Hero while keeping virtual companions close at hand (literally). We marvel at the obesity epidemic as our children rush home from school to hang out with friends in cyberland. Even our Wii had to remind us to exercise. And we want to share. Every emotion complete with our most intimate footage to boot. It's a circus and everybody wants to be a rockstar. We can advertise our assets (and love of Star Trek) through online dating while Facebook lets us make and break relationships before the other party consents to a 'status' change. Privacy is so last millenium. Well call me old fashioned, but I draw the line at Twitter. Yes folks, the rumors are true. Physioprof and I have made a pact. We will never ever Twitter. It's time to slow things down a notch. We want to enjoy a few moments disconnected. No electricity required, batteries not included. And we're not alone. The movement is growing. James joined in on the pact with 'Why Twitter Is Evil.' And you won't be receiving 'tweets' from my co-blogger anytime soon. Of course, many will disagree--we've got Twitter happy colleagues across the Hive and over at ScienceBlogs--but those stalwart among us have yet to be seduced into joining the dark side. Rather than documenting each experience as it happens in 140 characters or less--we prefer to live in the moment.