The alchemists’ goal of nuclear transmutation has been achieved, but not in the way they thought. 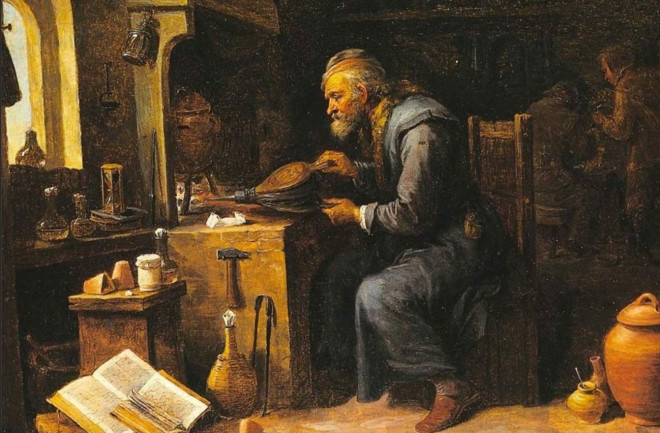 Practitioners of alchemy, the medieval and more spiritual predecessor of chemistry, once had a saying: “It is harder to destroy gold than to make it.” Gold — pure gold — is remarkably resilient against fire, acid and rust. In fact, short of launching it into the sun or tossing it into a volcano, leaving the element in a nuclear reactor for a while is your only chance of near-total destruction.

Small wonder, then, that gold has so captured the human imagination. Alchemists from China, India and Europe were for centuries obsessed with the transformation of base metals (particularly lead) into gold. They sought a mythical substance, called the “philosopher’s stone,” to accomplish this task, with no success. Their techniques have long since been relegated to the realm of pseudoscience, alongside many of their assumptions about the world, but the alchemists may have been on to something.

They were indeed correct that lead could be turned into gold — even if they were dead wrong about how it could be done. Now, modern science routinely takes us far beyond even the wildest dreams of the alchemists.

One of the most famous stories of nuclear transmutation comes from the 1970s, when nuclear chemist and Nobel laureate Glenn Seaborg worked at the Lawrence Berkeley National Laboratory alongside colleague Walt Loveland and then-graduate student Dave Morrissey. The scientists were using a super-heavy ion linear accelerator to bombard atoms with ions as heavy as uranium at relativistic speeds. “Among the ones we bombarded was lead-208,” Loveland says.

Accelerating the ions close to the speed of light allowed them to study nuclear reaction mechanisms. “We would measure the products, mostly concentrating on the yields,” Loveland says. Some of those yields were gold. “It was all relatively routine stuff. Then Seaborg said, ‘Hey, look at this — you’re transforming lead into gold, doing the alchemists’ dream reaction.’” He suggested that Morrissey write a paper on the research and present it at the upcoming American Chemical Society annual meeting in Miami.

“It did create a splash when I reported it at the [...] meeting, but it is not particularly difficult or unique,” Morrisey says. “One can use various nuclear reactions to convert essentially any element into another nearby element.”

Meanwhile, Seaborg was doing some “alchemy” of his own; he was busy transforming an everyday occurrence in the field of nuclear research into a spectacular story. “Seaborg was a great manipulator of the press,” Loveland says. “He got a lot of publicity out of this idea of the alchemist's dream.” Many reporters, as excited as the alchemists once were by the prospect of humans creating gold and enriching themselves, reached out.

The story might have kept on building steam, but it ran into some political headwinds. The experiment had caught the attention of Wisconsin senator William Proxmire, who was fond of skewering civil servants for wasting taxpayer dollars. At the time, it wasn’t remotely cost-effective to make gold this way. “…It cost something like $5,000 an hour to run the accelerator,” Loveland says, so they dropped it.

The business of nuclear research, of course, is often the process of transformation and, sometimes, creation. The heaviest 26 elements on the periodic table, for example, have only ever been observed in the lab — directly after some clever humans created them. Efforts are currently underway to make elements 199 and 120, Loveland says. And the study of the universe’s most exotic features, such as the quark-gluon plasma that may be at the heart of neutron stars, requires scientists to first make them in particle accelerators.

In alchemy’s heyday, there were both hope and apprehension about its practical possibilities. After all, a nation that could turn common metals into gold could presumably make itself very rich, very easily. Isaac Newton, perhaps the most famous alchemist of all time, was reportedly very anxious about public knowledge of alchemy and never wrote about it explicitly in his published writings.

But while there are practical uses of nuclear science, both in creating nuclear weaponry and nuclear medicine, Loveland says, the vast majority of the work nowadays is focused purely on better understanding the mechanisms of nuclear reactions. (Newton and the rest of us can rest easy in that knowledge.)