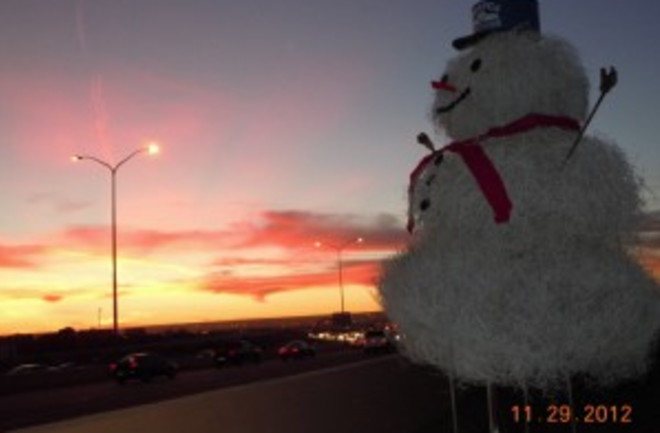 Tumbleweed snowman. Picture courtesy Albuquerque Metropolitan Arroyo Flood Control Authority You know Christmas is coming in Albuquerque when you spot the tumbleweed snowman rising as high as 13 feet over Interstate 40, leering at the shoppers on their way to Coronado Mall. Assembled from gargantuan examples of these noxious rolling weeds, the smiling giant has become a holiday tradition. For me it stands instead as a sad reminder, of how we lost the war against a relentless invader. Pictured in so many movies about the American West, tumbling tumbleweeds lope alongside stagecoaches and wagon trains, they amble down Main Street in ramshackle frontier towns. But if you’re watching a film about the California Gold Rush or the Battle for the Alamo and a tumbleweed comes blowing by, you’re witnessing an anachronism. The weeds, also known as Russian thistle or salsola tragus, didn’t arrive on the continent until 1873. They came here from Siberia and surrounding lands. Having evolved in the harsh climes of the Russian steppes, even the dry American West seemed like paradise. Within a couple of decades they had spread all the way to California. By now tumbleweeds have been spotted in every state except Alaska and Florida. They have even made their way to Hawaii. In this month’s National Geographic, I tell the strange history and describe my personal battle against this unkillable enemy. The story is illustrated with magnificent photographs by Diane Cook and Len Jenshel. Maybe it is healthier to accept that we lost this war, to follow Kent Brockman on The Simpsons and welcome our new weedy overlords. That is what they seem to have done in Albuquerque.

The trouble begins around sundown, when a couple of city slickers out for a drive in the desert become stranded along a lonely canyon road. It’s silent and windless. Yet one by one, like wolves in the night, tumbleweeds start gathering around them. . . .

Comments are welcome by email

. For public discussion please use Twitter. For a glimpse of my new book, The Cancer Chronicles, please see this website