Images from the mission that tested the lunar module Apollo 11 would use to land on the moon just months later. 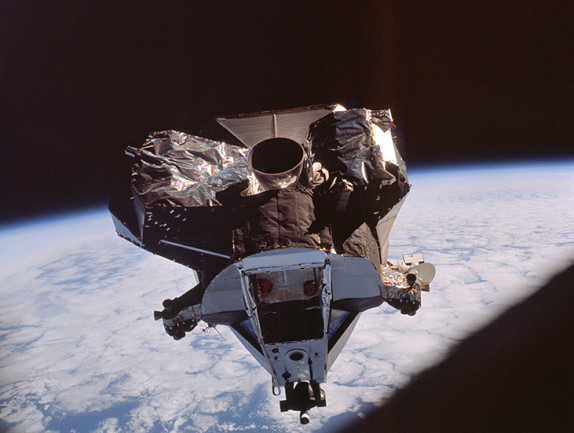 The LM, minus the descent stage, returns from its hours-long solo flight. 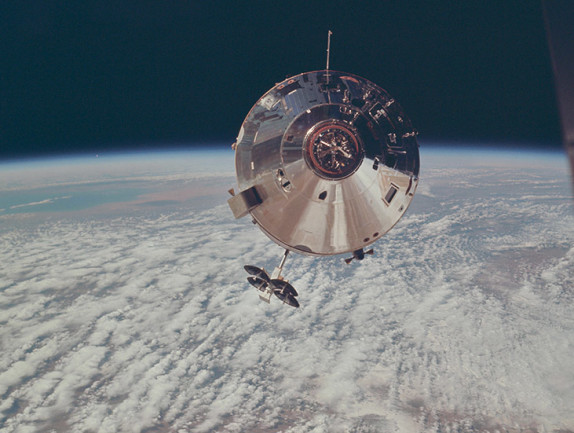 Astronauts in the module took a picture of the command module, dubbed Gumdrop. 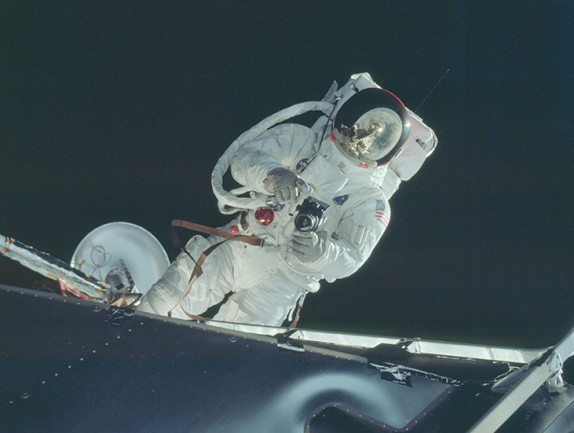 Rusty Schweickart comes out of the lunar module hatch for a spacewalk to test the EVA moon suit. The circular object behind him is one of the four landing pads. 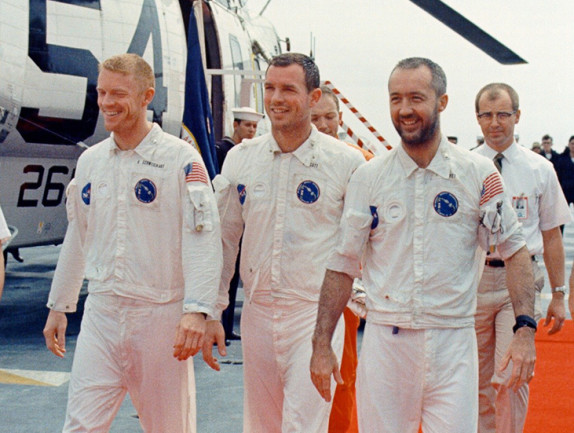 From left, Rusty Schweickart, Dave Scott, and Jim McDivitt walk on the Guadalcanal deck after 10 days of weightless flight. 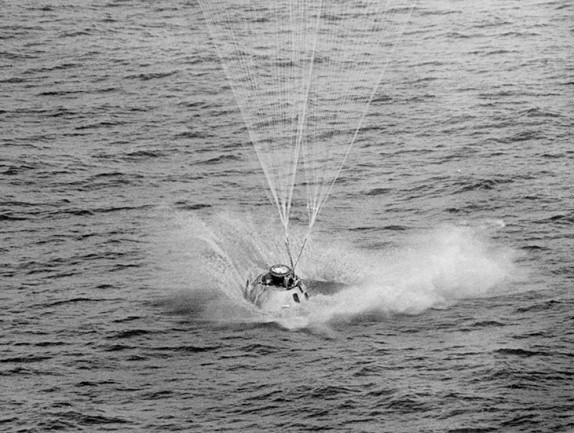 Splashdown was on target and and just 10 seconds later than planned, about 340 miles north of Puerto Rico. 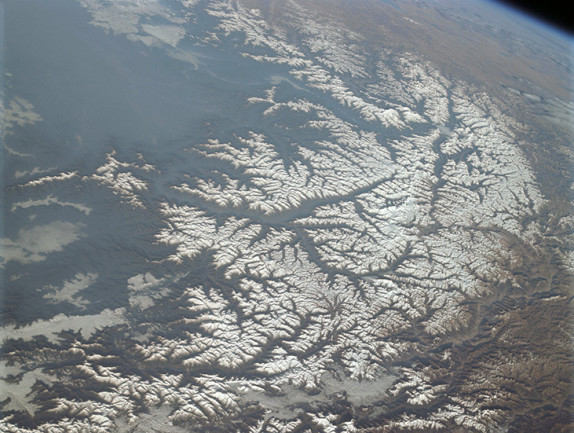 With 10 days in orbit, the crew had time to take a few pictures of home. This view shows the eastern Himalaya mountains where Myanmar, India and China meet. 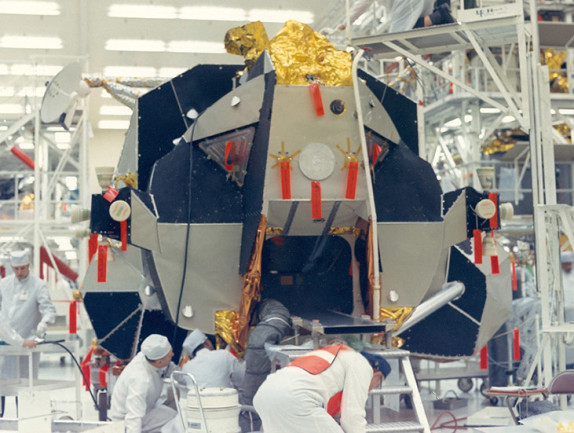 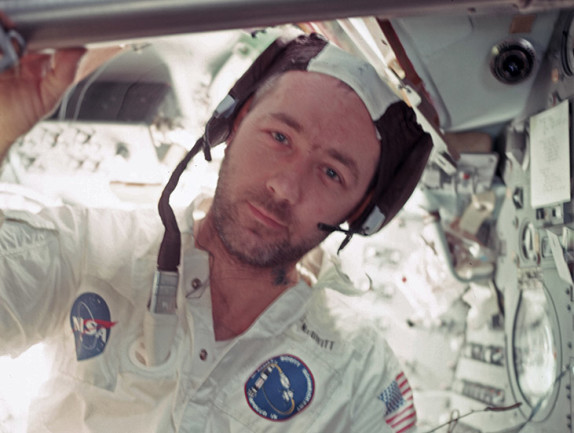 Mission commander Jim McDivitt poses inside the command module during the flight. 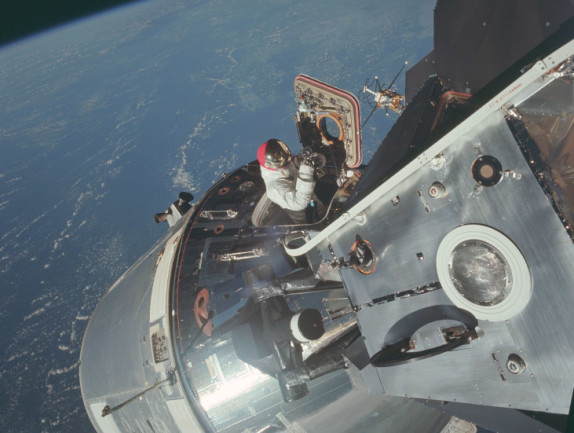 Unlike Apollo 8’s spectacular moon voyage, Apollo 9 never left low earth orbit, but its mission was essential: fly the ungainly-looking lunar module on a shakedown cruise. With spidery legs and a chunky profile, the module, dubbed Spider, was all function, no form — the ideal machine to land on the moon.

The crew was led by veteran astronaut Jim McDivitt, whose previous flight on Gemini IV featured the iconic first US spacewalk by Ed White.

A Saturn V launched the mission on March 3, 1969, carrying McDivitt, Rusty Schweickart, and Dave Scott into orbit to test the module's fitness to land on the moon and safely return. During the ten-day flight, the astronauts tested the craft's descent engine while coupled to the command module, lifting both spacecraft to a lofty 300-mile orbit and marking the first crewed throttling of an engine in space. Later in the mission, McDivitt and Schweickart flew solo up to 113 miles away from the command module, using the ascent engine to maneuver and return.

The nearly flawless flight ended March 13, with a splashdown only 3 miles from the USS Guadalcanal.

Here, command module pilot Dave Scott emerges from the hatch of Apollo 9 to photograph the attached lunar module, which was flying in space for the first time. 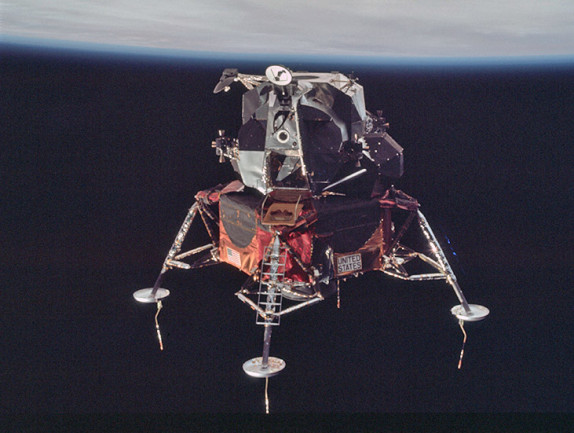 The module dubbed Spider, flies free as astronauts ease it away from the command module. They later flew as far as 113 miles away before returning. The module was not designed for re-entry. 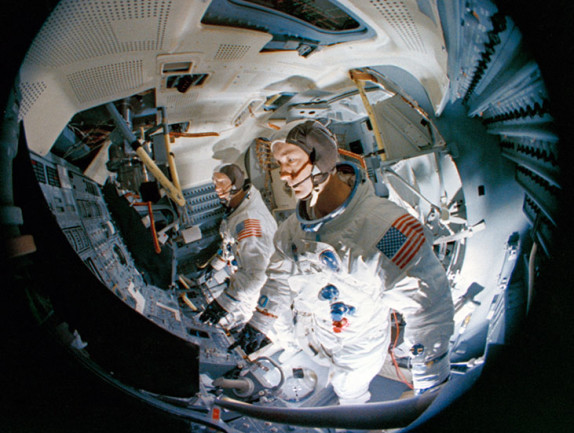 McDivitt (foreground) and Schweickart train in the lunar module simulator. 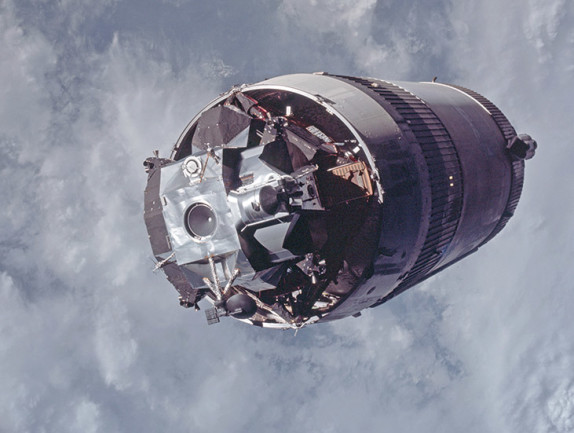 The lunar module can be seen at the top of the Saturn rocket booster shortly after reaching orbit. Astronauts in the command module performed a rendezvous to extract it from the booster.