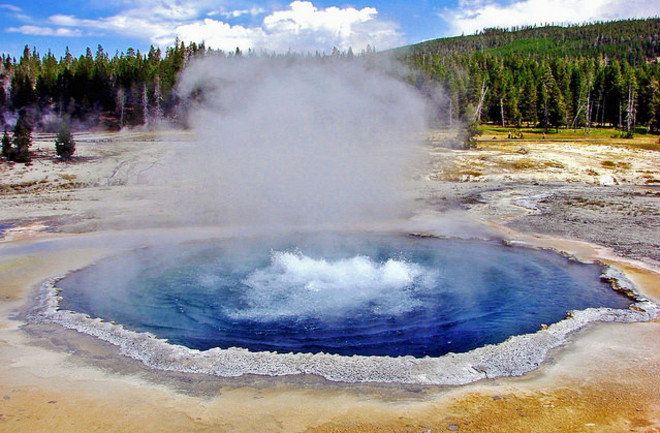 A hydrothermal pool in Yellowstone National Park (Image: Flickr/Don Graham). Viruses are the most common biological entities on Earth, numbering in the cool billion billion trillions. And while their dependency on full-blown cells relegates them to the realm of pseudo-life, viruses have enormous impacts on other biological communities and the flow of elements and nutrients through global systems. This realization has spurred research into environmental viruses, the type that infect not human or animal hosts, but microbial ones. The nature of these interactions – the consistency over time, the number of viral species and their interconnectedness – is an emerging area of research. This is particularly true of Archaea-targeting viruses: the host microbes themselves have only recently been accepted as important ecosystem players, and the role of viral forcing is just coming into focus. To pursue these questions, a group of researchers led by Benjamin Bolduc at Montana State University took samples over a period of five years from Nymph Lake hot spring in Yellowstone National Park. The site had several advantages: given the relatively simple microbial community, the challenge of piecing together intricate virus-host connections seemed tractable. And hydrothermal systems are known to favor the Archaea over Bacteria and Eukaryotes, allowing the researchers to see how viruses interact with the least-known domain of life. Collecting, sequencing, and stitching together the viral genomes was a major challenge due to their relatively small genomes (tens of thousands of DNA base pairs, compared with a few billion in humans) and minute degrees of heterogeneity. Viruses are also notorious gene-swappers, scrambling genetic markers even further. The team responded by looking at viral groups through a network-based approach rather than focusing on difficult-to-define species, gaining a deeper understanding by taking a step back in genomic resolution. 110 viral groups emerged – a stark contrast to more diverse microbial environments like marine sediment, which can host up to a million different viral types per kilogram. But of the 110, 94% were never-before-seen variants. Throughout the multi-year effort, certain viral groups rose above the statistical noise. At one point, Lipothrixiviridae sequences accounted for roughly 35% of all assembled DNA; a few months later, Sulfolobus islandicus rod-shaped virus 1 (a catchy name often acronymized as SIRV-1) ran to the top spot. But overall, the viral community was remarkably stable. Nearly all of the 110 groups were present throughout the study, a surprising result given the boom-and-bust dynamics frequently dictated by viral lysis events. But this stable composition is consistent with a different view of viruses in environments – a view that prioritizes long-term persistence rather than a quick win. After all, particularly deadly viruses soon find themselves without any hosts to infect. On the other hand, the stable community could be more indicative of the harsh hydrothermal environment: perhaps the genetic consistency isn’t a “choice” but rather a strong selective barrier imposed by the hot springs. Linking viral dynamics to microbial community shifts and measures of productivity are important next steps, but Bolduc and his colleagues offer a useful way to make sense of viral genetic information and see order amid the microscopic chaos.