Top 5 Comfort Foods To Get You Through The Day 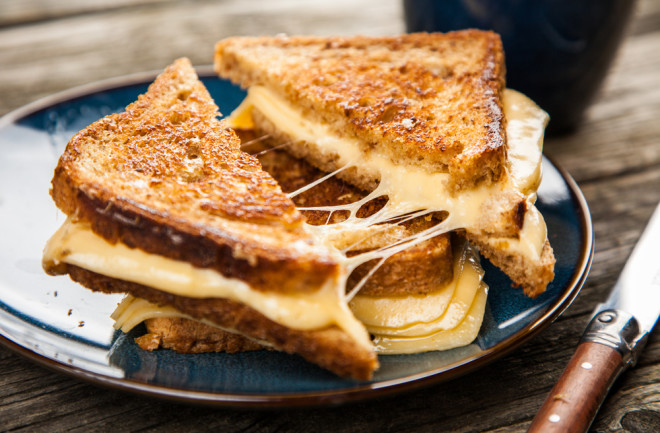 What comes to mind when you think of “comfort food?” For many Americans, it conjures up thoughts of burgers, ice cream, fried chicken, French fries, or chili. Yummy foods are favored for an obvious reason — the flavor. But research done by psychology professor Shira Gabriel links comfort food preferences to a positive connection with the person who made it for you, often during childhood. That association is one reason why people seek out specific foods when they’re feeling down — even if they’re not especially hungry. Foods that we enjoy can release natural chemicals (like serotonin) that have the ability to elevate mood. Most comfort foods are high in some combination of fat, sugar, calories or carbs, and low in nutritional value, but we aren’t here to judge. Here are the top five comfort foods to get you through your day.

Although the phrase “grilled cheese” didn’t emerge until the 1960s, the concept was known long before. Prior to that, it was called melted cheese or toasted cheese sandwiches. This humble sandwich of gooey, hot cheese between two pieces of toasted bread is an American favorite. The emergence of this popular food is related to two American entrepreneurs— Otto Frederick Rohwedder, who invented the bread slicer, and James L. Kraft, who found a way to pasteurize cheese. The concept of grilled cheese is basic, your choice of cheese placed between bread and grilled in a pan with melted butter. But there are endless variations, 50 of which can be found here. Some people use mayonnaise instead of butter, which sounds a little weird, but apparently makes a crispier sandwich.  Check out this video about the world’s most expensive grilled cheese.

There are debates to be had about the best way to make macaroni and cheese — what type of cheese to use, whether or not to top with breadcrumbs, should there be the inclusion of lobster or bacon. But whatever way people prefer their mac and cheese, they absolutely love it. Thomas Jefferson has been incorrectly credited with introducing this dish to America. Although he likely  did serve it to guests and may have increased its popularity, it was actually his enslaved chef, James Hemmings, who deserves the credit. After learning French culinary techniques while accompanying Jefferson to Europe, Hemmings adapted what he learned into his own version of macaroni and cheese. When packaged cheese reached store shelves, many more people were able to prepare this meal. And of course, Kraft boxed Macaroni and Cheese Dinner became (and remains) a go-to item for easy prep and enjoyment of this staple.

Whether you’re a purist or like to add roasted garlic, horseradish, or cheese, mashed potatoes are a top food choice. Several factors can influence the taste, including the addition of salt, butter or cream/milk. The type of potato is also important. Yukon gold seems to be the winner – they’re  rich, dense and buttery, and don’t need as much water as other potatoes. Another option is the russet potato. Their high starch content results in a light and fluffy finished product. How you do the mashing is a point of personal preference. Some people use a potato masher, while others go with a potato ricer. The ricer is more labor-intensive (squeezing the potatoes through tiny holes) but creates a lighter, less gummy final product. If you want to get fancy, add a few eggs and pipe the potatoes into swirls known as duchess potatoes.

Pizza consistently finds a place at the top of the comfort food list. Pizza first took off in Naples, Italy, in the 1760s, after the arrival of tomatoes. The Neapolitan people were the working poor and needed cheap food that could be eaten in a hurry. During a visit to Naples in 1889, Queen Margherita tasted and enjoyed pizza. Her favorite toppings were tomatoes and basil, now known as Margherita pizza. As Italian immigrants started coming to America in the late 19th century, other people started being exposed to pizza and it became incredibly popular — reaching outside of the Italian community. It’s not just Americans who enjoy pizza. Many cultures around the world enjoy their own versions of this favorite. These include toppings such as sardines, salmon, and raw onions in Russia, pickled ginger in India, and kimchi and snails in Korea

Surprising as it may seem, spaghetti and meatballs are an American creation. In Italy, meatballs are served by themselves and not with pasta. Italian meatballs, which were known as polpette, were much smaller – around the size of a marble. In fact, some Italians find the very concept of spaghetti and meatballs to be offensive. It’s easy to understand how this divide emerged. When Italian immigrants came to America, meat was very expensive. To augment the cost and stretch their meal further, they added dried pasta and canned tomatoes. And with that, this ubiquitous dish was born. Check out this video from America’s oldest Italian restaurant, recognized as having the best meatballs in the United States.