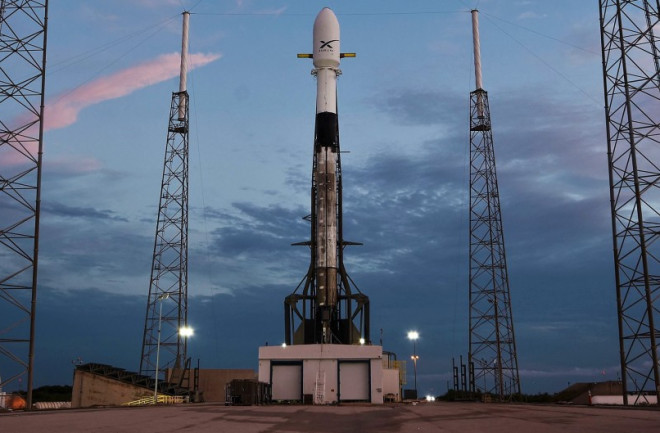 The first real batch of Starlink satellites launched in 2018 on a SpaceX Falcon 9 rocket. (Credit: SpaceX)

Tonight, SpaceX will launch the first flock of their Starlink satellites to space. These are the vanguard of what CEO Elon Musk hopes will eventually become a network of 12,000 orbiting devices providing cheap, global internet coverage. The launch window opens at 10:30 p.m. E.T.

The satellites, which are densely packed inside the cargo hold already, will be delivered to space on a Falcon 9 rocket. The weather forecast for Cape Canaveral, SpaceX’s standard launch site, looks promising for tonight, though a backup launch window waits on Thursday night if there are any delays. SpaceX will livestream the launch (see below).

Musk is not alone in his dreams of a global satellite internet. Multiple other companies have filed plans with the FCC or started their own satellite deployment. Among the competitors is Amazon, owned by Jeff Bezos, who likewise owns SpaceX’s spaceflight competitor Blue Origin.

At the moment, satellite internet is expensive, but it provides the option of network coverage in remote areas not practical to run physical fiberoptic cable networks. By putting the whole network in space, companies can reach the entire globe. SpaceX launched two prototypes for their Starlink network in 2018.

But the 60 satellites that will fly tonight are more advanced production models, and will be the start of the true fleet. Musk says that six more launches, each packing a whopping 60 satellites, will be required to provide minor coverage. With another six, Musk predicts moderate coverage. Eventually, he foresees an army of 12,000 individual satellites.

For tonight’s launch, Musk is maintaining his usual approach to SpaceX firsts and setting expectations somewhat low, in anticipation of any faults that may occur. So while tonight’s payload could be part of the final fleet, it’s also possible that SpaceX will instead learn how not to launch 60 satellites at once.

The satellites will be deployed a little over an hour after launch. Each satellite, which weighs about 500 pounds, has its own ion thruster which it will then use to climb an additional 60 miles or so to reach its orbiting altitude. The thrusters should also allow the satellites to maintain and correct their orbits throughout their lifetime, using a cache of onboard fuel in the form of krypton.

The satellites can each track space debris and avoid collisions autonomously, so some amount of maneuverability is needed. And, in hopes of countering space junk concerns, at the end of their lifetime, they’re built to re-enter the atmosphere and burn up ⁠— at least mostly. SpaceX promises 95 percent disintegration, and is hoping to make that number 100 percent with later models.

Eventually, the network will consist of teams of satellites working at three different altitudes, forming layered “shells” that each operate at a different frequency. For tonight, all the satellites will be aiming for the lowest shell.

You can watch the launch live starting 15 minutes before launch: