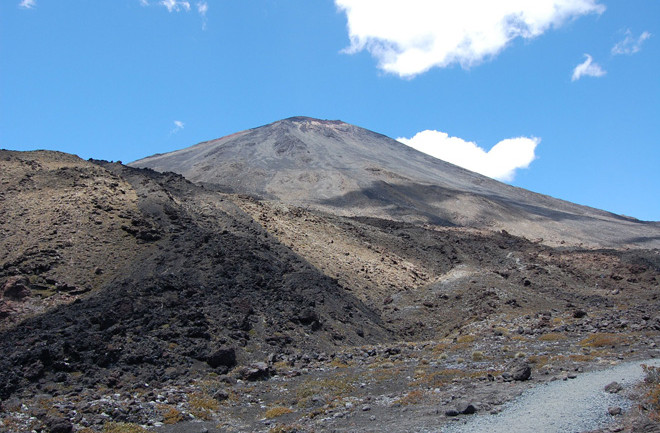 Ngauruhoe (background) and lava flows from Tongariro (foreground), taken from the Tongariro Crossing. Image by Erik Klemetti, taken January 2009. The North Island of New Zealand is littered with volcanoes, stretching from White Island in the north to Ruapehu in the south and as far west as Taranaki. It is also home to giant caldera, such as Taupo, that produced one of the few known ultraplinian eruptions - the 186 A.D. eruption that may have had a plume that towered over 50 km above the land. However, over the past 20 years, things have been pretty quiet in New Zealand, with only eruptions from Ruapehu in 1995-96, but these volcanoes of the North Island are still active, so GNS Science keeps a close watch. It appears that one volcanic system is rumbling some this summer. Tongariro, just to the north of Ruapehu, has seen an increase in volcanic earthquakes over the last few weeks. The latest report from GNS Science says that over 20 volcanic earthquakes have been recorded at Tongariro since July 13, well above the usual two per year that appears to be the background level at the volcano. Due to this unrest, the alert level from Tongariro was raised to 1 (the second lowest on the GNS Science scale) and the aviation alert was changed to Yellow. These earthquakes are relatively shallow, from 2 to 7 km, and under the Emerald Lake and Te Mari craters. This is interesting as the last eruption from the Tongariro system came from Ngauruhoe (see above) in 1977 - and the last eruption from the main Tongariro edifice itself was in 1897 (also located under Te Mari). However, there was also a brief seismic swarm under Tongariro in 2001.

A volcanic hazard map for Tongariro volcanic system in New Zealand, posted on a hikers' shelter wall along the Tongariro Crossing. Image by Erik Klemetti, taken January 2009.Brad Scott from GNS Science is quoted as saying this activity is "unusual", but does also remind us that Tongariro is an active volcano with a hydrothermal system. So, the causes of these earthquakes could very well not be related to magmatism, but rather something occurring with the hydrothermal system at depth. However, as with any active volcano, these signs need to be watching closely. This is doubly so at Tongariro because the area is a popular tourist destination. I've walked part of the Tongariro Crossing, between Nguarahoe and Tongariro itself, and in the shelters for hikers you find volcanic hazard maps posted on the walls (see below). Although the number of people may be low in the area, the New Zealand government would likely close the area if unrest continues as to reduce the risk to any hikers on the Crossings. Typically, the Tongariro system will produce VEI 1-3 eruptions that have both an explosive component and lava flows. GNS Science has a webicorder at Tongariro so you can follow the rumblings (although wind can cause a lot of noise on these webicorders). There are also some webcams pointed at Tongariro and Ngauruhoe in case the activity takes a turn toward the volcanic.