Tomorrow’s Satellites Could Run on Air 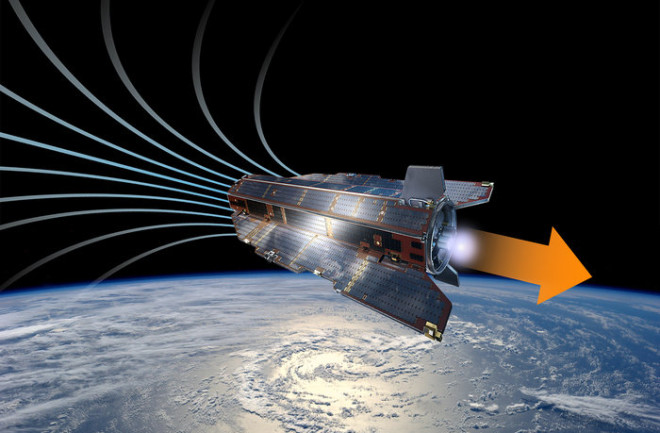 Air-breathing thrusters could power satellites of the future. (Credit: ESA) Breathe in. Breathe out. Take a second and just let the air flow naturally through you. When you’re having a tough time — you’re feeling an awful lot of resistance, maybe, or just running out of energy — remembering to breathe is important. It’s a mantra for a reason. And now it’s not just good advice for people. The European Space Agency announced this week they’d developed a satellite thruster that breathes too, solving a host of problems and establishing a possible new era for upper-atmosphere aircraft.

While it’s easy to think that space starts where our atmosphere stops, it’s actually not a very firm boundary. There is an “official” edge, but the atmosphere itself just tapers off, getting thinner and thinner. Satellites that orbit in that gray area have to compensate for air resistance, requiring extra fuel and entailing shorter lifetimes than missions farther away.

The air-breathing ion thruster. (Credit: ESA) The new thruster would bypass all that, “inhaling” the sparse particles of air up there and using them as propellant. Spacecraft equipped with the thruster could then fly very low orbits, around 124 miles up, for years on end.

The relatively simple machine — “no valves or complex parts” according to the ESA — basically sucks in the infrequent air particles and gases them up with heat and electricity. This lets the thruster shoot them out the back, providing a modest, but measurable, thrust (around 5 mph when all goes well). An Italian lab built and tested an actual prototype, running within a vacuum chamber to simulate the thin atmosphere, and saw that it really did work. New air-breathing propulsion systems may thus be the next big thing in spacecraft, opening a door into a new type of missions simply impossible with previous technology. And that isn’t limited to Earth, since Mars and other worlds have their own atmospheres that could power such machines. Whoa. Let me catch my breath.