The Milky Way and Andromeda rule over a motley collection of a few dozen galaxies. 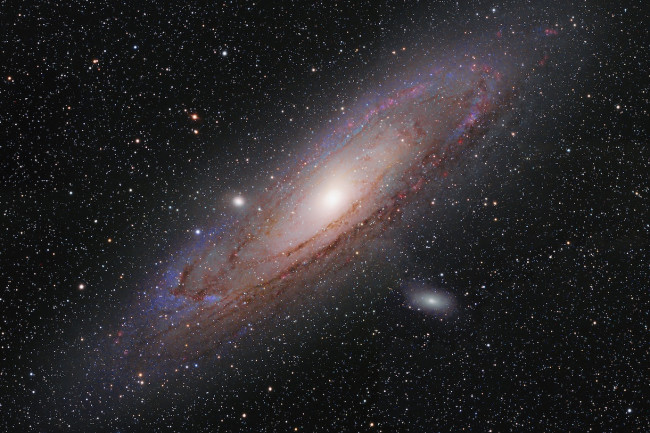 The Andromeda Galaxy (M31) stands as the largest member of the Local Group. This view shows the dusty spiral arms that make up its disk and its yellowish galactic bulge. Also note two of its satellite galaxies: M32 (left of center) and NGC 205 (at lower right). (Credit: Hunter Wilson)

This article appeared in the June 2020 issue of Discover magazine as "Welcome to the Neighborhood." Subscribe for more stories like these.

A century ago, most astronomers believed our galaxy was the whole universe. That changed abruptly in 1923, when American astronomer Edwin Hubble discovered Cepheid variable stars in the large “spiral nebula” in the constellation Andromeda. Because the periods of these stars correlate with their luminosities, Hubble could deduce their distances. He concluded that the stars — and the spiral nebula to which they belong — must lie far beyond the Milky Way.

That spiral galaxy, now known as the Andromeda Galaxy (M31), shares many characteristics with our own. Both are barred spiral galaxies with hundreds of billions of stars and disks that span more than 100,000 light-years. And even though astronomers long thought M31 outweighed the Milky Way by two or three times, recent studies hint that the two may have similar masses.

These two giants — cosmic neighbors 2.5 million light-years apart — anchor our Local Group of galaxies. This gravitationally bound collection spans about 10 million light-years and contains more than 54 members. At least, that’s how many astronomers have detected so far. Finding small, dim galaxies taxes even Earth’s biggest telescopes, so quite a few more likely lurk in the shadows of their big brothers. Finding these low-luminosity companions and studying how they interact will help astronomers understand the evolution and ultimate fate of our home galaxy. 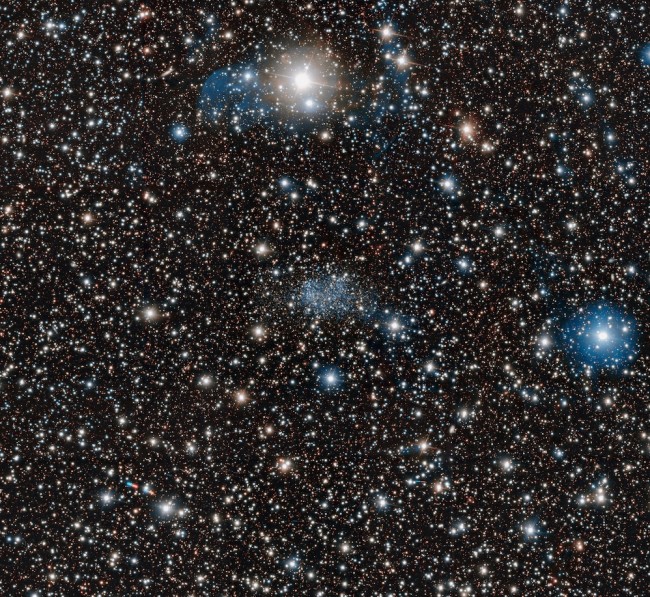 The Kings and Their Court

There’s a big drop-off in size after M31 and the Milky Way. The Local Group’s third-largest member, the Pinwheel Galaxy (M33), is only one-tenth the size of its larger neighbors. Located some 2.75 million light-years from Earth in Triangulum, M33 is the Local Group’s only unbarred spiral. Because it lies relatively close to M31, some astronomers suspect it may be a companion or even a satellite galaxy to Andromeda.

There’s no question that the Local Group’s fourth-biggest component, the Large Magellanic Cloud (LMC), is a satellite galaxy to our own. At a distance of 160,000 light-years, it looks to the naked eye like a detached piece of the Milky Way. The LMC resides on the border between Dorado and Mensa, and it never rises for observers at mid-northern latitudes. Classified as an irregular galaxy, the LMC holds roughly one-fifth the mass of M33.

For each of these massive members, the Local Group harbors more than a dozen dwarf galaxies. Many flit around the larger members like moths around a streetlight. The Andromeda Galaxy hosts at least 15 satellite galaxies, including two (the small ellipticals M32 and NGC 205) that show up through backyard telescopes in the same field of view as their host. The Milky Way boasts more than a dozen satellites, including the LMC and its neighbor, the Small Magellanic Cloud (SMC), in Tucana. Oddly enough, M33 has no confirmed satellite.

Away from the big galaxies and their entourages lie several other small galaxies that appear to be gravitationally independent from the rest. Most of these are obscure, and astronomers have difficulty teasing them out from foreground stars in the Milky Way. The outermost members of the Local Group seem to be Sextans A and Sextans B, a pair of tiny irregular galaxies about 4.35 million light-years away.

The Local Group exposes a challenge familiar to most scientists: Big objects are easier to find and examine than their more ubiquitous little cousins. Biologists can observe and study elephants more easily than they can microscopic creatures that outnumber them a millionfold. And stellar astronomers have little problem seeing massive, highly luminous stars across the galaxy, but they have to search deeply to discover smaller, fainter red dwarfs that make up 75 percent of the Milky Way.

Of the 100 brightest stars in the night sky, only five are also among the 100 closest. And no red dwarf shines brightly enough to be seen with the naked eye.

For galactic astronomers, the Local Group provides a near-perfect laboratory for exploring the smallest, most common galaxies. Our neighborhood collection comprises three spirals, two ellipticals, nine irregulars (including the LMC and SMC), and at least 40 dwarf elliptical, dwarf irregular, and dwarf spheroidal galaxies. To truly understand the universe at large, scientists need to study these abundant dwarf galaxies and how they relate to their scarce masters. 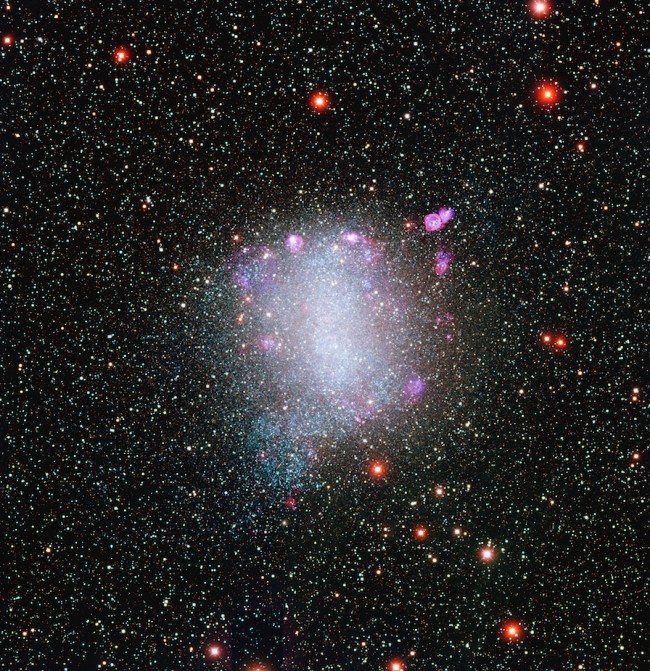 Unlike most of the dwarf irregular galaxies in the Local Group, NGC 6822 holds many massive blue stars and the reddish star-forming regions that give birth to them. (Credit: Local Group Galaxies Survey Team/NOAO/AURA/NSF)

Ghost in the Machine

To do so, astronomers would like a complete inventory of the Local Group. It’s not as easy as it might seem. Any unknown galaxies would have to be ultrafaint, spread out so thinly that they blend into the sky or hide behind the Milky Way’s dusty disk.

In fall 2018, a team of astronomers announced they had discovered a galaxy that checks all those boxes. Named Antlia 2, this new Local Group member is a Milky Way satellite dubbed a “ghost galaxy.” It’s an apt description. The object is a giant dwarf — if that makes any sense. Although it has a diameter similar to the LMC, it radiates 10,000 times less light. It seems far too dim for its size, or far too big for its luminosity.

The team, led by Gabriel Torrealba of the Institute of Astronomy and Astrophysics in Taipei, Taiwan, discovered Antlia 2 while scouring data from the European Space Agency’s Gaia satellite. Launched in December 2013, Gaia has been building a star catalog containing high-precision measurements of nearly 1.7 billion stars.

The researchers sifted through the data looking for RR Lyrae stars — lower-luminosity cousins to the Cepheid variables Hubble used to discover M31’s galactic nature. RR Lyraes are old stars with few of the heavy elements found in younger ones like the sun. Because they show up in every known Milky Way dwarf satellite, the team sought them as tracers for previously undetected dwarfs.

For a dwarf, Antlia 2 raises some big questions. Its low mass is typical of satellite galaxies, but its large volume is not. Although tidal forces from the Milky Way should strip stars from the galaxy and cause it to lose mass, the process should cause Antlia 2’s volume to shrink, not grow. “Antlia 2 is an oddball,” says team member Matthew Walker of Carnegie Mellon University. “We are wondering whether this galaxy is just the tip of an iceberg, and the Milky Way is surrounded by a large population of nearly invisible dwarfs similar to this one.”

Although Antlia 2 currently lies some 425,000 light-years from the Milky Way’s center, its orbit brings it as close as 150,000 light-years. However, that should still be far enough to keep the dwarf intact for billions of years.

But not all of the Milky Way’s satellites will be so lucky. One in particular, known as the Sagittarius Dwarf Spheroidal, has passed through our galaxy’s disk several times, and it is gradually dissolving into streams of stars as the Milky Way’s tides pull it apart. The center of this galaxy lies about 82,000 light-years from the Milky Way’s center. The Canis Major Dwarf is even closer (42,000 light-years away) and equally disturbed.

Eventually, our galaxy will consume these and many other satellites, growing the Milky Way while shrinking the number of its companions.

Of course, a battle between the heavyweight Milky Way and a flyweight satellite galaxy can end only one way. But what happens when two more equal combatants face off? You’d likely wind up with something like the Magellanic Clouds: irregularly shaped galaxies experiencing lots of star formation.

Astronomer Sally Oey of the University of Michigan led an international team that used Gaia data to study the motions of 315 stars in the SMC. In October 2018, the scientists announced that stars in the southeastern part of the SMC are moving away from the bulk of the galaxy and toward the LMC. Computer models show that the two galaxies likely collided head-on a few hundred million years ago.

These two middleweight warriors probably will encounter each other again and again, ultimately merging into a single galaxy. But the Local Group’s ultimate battle will play out when its two heavyweights collide. Observations show that M31 is on a collision course with the Milky Way. The massive galaxies will make an initial close pass in a little less than 4 billion years. Strong tidal forces will deform them both, transforming their orderly disks into messy splashes of gas and stars. Two billion to 3 billion years later, they finally will merge into a single giant elliptical galaxy that astronomers have dubbed Milkomeda.

M33 likely will orbit the combined galaxies for a while before it, too, falls under their gravitational spell. The rest of the Local Group will follow suit.

With a few billion years of time on their hands, future astronomers should get a good handle on the Local Group and its members, and use it as a building block to get a better idea of how the universe will evolve. Not a bad legacy for a motley collection of a few dozen galaxies.

Richard Talcott is a contributing editor to Astronomy. His latest book is Space Junk (Ziga Media, 2019).

The SciencesAstronomers Find the Closest (Known) Black Hole to Earth 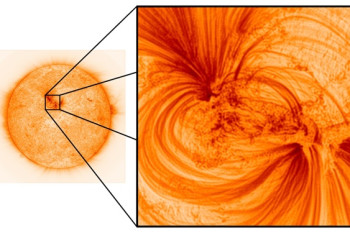