How We'll Get to Jupiter Without Nuclear Power

With dwindling radioactive sources, NASA turns to solar panels to siphon power in the darkest parts of our solar system. 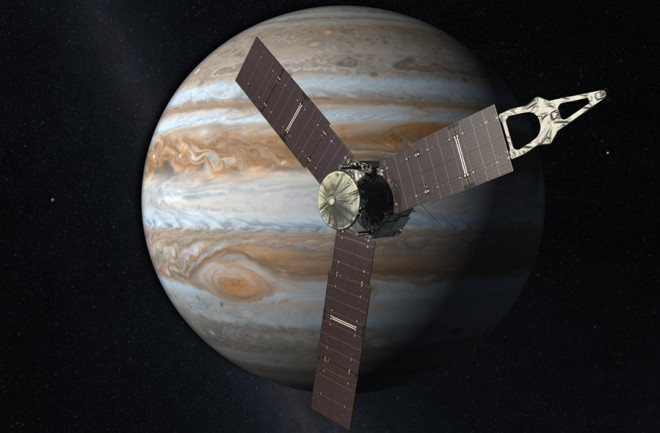 When NASA’s Juno spacecraft arrived at Jupiter this summer, engineers did a victory dance — and not just because their mission would return the best Jovian data ever. They were also celebrating Juno’s solar panels — the biggest on any planetary probe — taking the mission farther than any other sun-powered spacecraft.

Juno’s solar technology represents a giant leap in space exploration. Before its success, far-out craft used nuclear power. The Cassini mission to Saturn, the twin Voyagers’ trips beyond the solar system, Curiosity’s rove around the Martian surface, New Horizons’ pass by Pluto and Galileo’s close encounter with Jupiter were all brought to you by the radioactive element plutonium-238.

NASA uses dense plutonium “pellets” for fuel. As the atoms decay, they release high-speed helium nuclei and then become smaller uranium atoms. The ejected helium particles smash into the atoms around them. That collision creates heat that the spacecraft transforms into electricity.

But there’s a problem with this power source: We’re running out. Earth’s natural supply has decayed over billions of years, leaving only small traces today. During the Cold War, when the U.S. cooked up A-bomb material, plutonium-238 was a fortunate byproduct. But since we decided to be more peaceful, those facilities have gone away.

Then, around 2012, the Department of Energy and NASA commissioned Oak Ridge National Laboratory to resurrect those skills and infrastructure. Last December, Oak Ridge responded joyfully: “We did it!” The lab irradiated neptunium-237, and these juiced-up atoms decayed into plutonium-238, which the engineers isolated and shipped off to be turned into pellets.

But this was just a demonstration, not yet scalable to NASA’s needs. The agency only has about 35 kilograms of plutonium left right now, according to Robert Wham, head of the Oak Ridge project. And all of it is decaying.

“If you allow the material to decay too long, you don’t get the heat out,” he says.

Wham hopes that this project can ease future power-source constraints. “I don’t want the supply to be an impediment to future missions,” he says.

And nuclear is no longer the only way to go, says Lockheed Martin’s Kevin Rudolph, one of Juno’s lead engineers. The probe’s success shows that solar is a deep-deep space contender.

“Nuclear power is so expensive, and solar arrays are not nearly as expensive,” says Rudolph.

The primacy of solar panels wasn’t always clear. In the 1980s and ’90s, solar cells were only about 10 to 15 percent efficient, meaning that if they captured 100 watts of sunlight, they delivered just 10 to 15 watts of electricity. And at Jupiter — five times farther from the sun than Earth — sunlight is 25 times less energetic. “When you got out as far away as Jupiter, the thinking in those days was that you couldn’t use solar power because it was just too hard,” says Rudolph.

By the time the team started building Juno, in the early 2000s, solar cells could deliver the same power for around one-third the panel size.

The engineers decided to give Juno three solar arrays, each 9 feet wide and 30 feet long. The solar cells weren’t wired identically, with different sections designed to take advantage of different conditions. Juno needed just 75 square feet of cells to be turned on when it was near Earth, where the light is bright; another 150 square feet helped power Juno through the asteroid belt; and the rest was optimized to work near Jupiter, where radiation is high.

“We get a whole different kind of electrical output from a cell at that condition,” says Rudolph.

While Juno was close to home, only the Earth-tuned cells were turned on. After it passed into the middle distance and then went beyond, all three arrays spooled up. That combination yields some 550 watts of power — about 50 more than Juno generally needs. And so far, that’s worked well.

Now, it’s time to go farther, better. Juno’s solar cells sit on heavy aluminum-graphite panels. In newer designs, engineers affix cells to a flexible, lightweight sheet that’s easier to launch. Although the next planet (reminder: Saturn) is twice as far from the sun as Jupiter, Rudolph believes that someday sun-catching technology could power that trip without plutonium.

But those next-next-gen solar technologies aren’t yet ready for space. And NASA’s Game Changing Development Program is on it. According to LaNetra Tate, the program’s executive, “We go after high-payoff, high-reward technology.” That includes solar.

In March 2016, the program gave four teams up to $400,000 each to develop solar cells designed to work in low-temperature, high-radiation environments. This month, officials plan to choose the best two to continue, with up to $1.25 million more for development, before naming the final team to potentially create a solar array that could be used on a future mission.

Tate says the inspiration came from several missions, including Juno. Engineers discovered that they had to take customization to the extreme and essentially screen each cell of the solar array, using only the best of a batch, to squeeze more power out. NASA hopes to make perfect cells in large batches soon — without having one great cookie and lots of wonky ones.

If they can pull it off, such arrays could soon extend solar’s reach to the outer planets, freeing up precious plutonium for more energy-intensive NASA missions. That means better data cheaper — and lots more victory dances.

[This article originally appeared in print as "To Jupiter, Sans Nuclear."]