Holy yikes: an iceberg 25 kilometers across that broke off of Antarctica in 2000 has made a break for it and is headed toward Australia! Check this out: 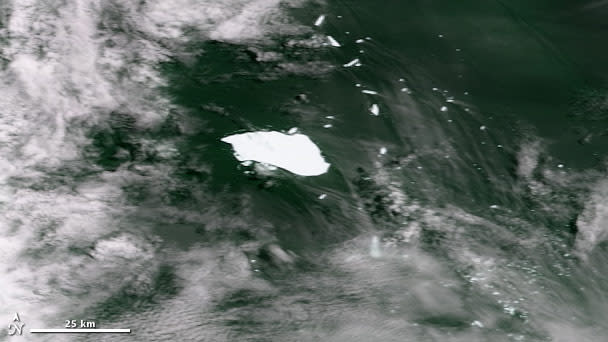 Whoa. The berg has been monitored from space by NASA since November. Usually, they circulate around Antarctica due to currents there but this one managed to escape, and is drifting northeast toward Australia's south-southwest coast. Since it broke off the main ice mass it shrank from 140 square kilometers (and may I say HOLY CRAP 140 SQUARE KILOMETERS! That's 54 square miles!) down to 115 square km. If you're not sure how big that is, then think on this: Manhattan is 88 sq km. It would fit comfortably inside that iceberg. NASA is monitoring this berg using the Terra and Aqua satellites designed for just this purpose. A shipping warning has been issued -- though it may be hard to miss a chunk of ice 20 freaking kilometers across, the berg itself is calving, and smaller shards could be a hazard to ships in the area. That is a whole lot of ice. I can't help thinking: it's actually bigger than the Kuiper Belt Object spotted by Hubble which I wrote about earlier. And it's a whole lot closer. Wow.