One of the universe’s strangest stars is thought to form when a neutron star gets sucked into a red supergiant. But despite 45 years of searching, astronomers still aren’t sure they’ve ever found one. 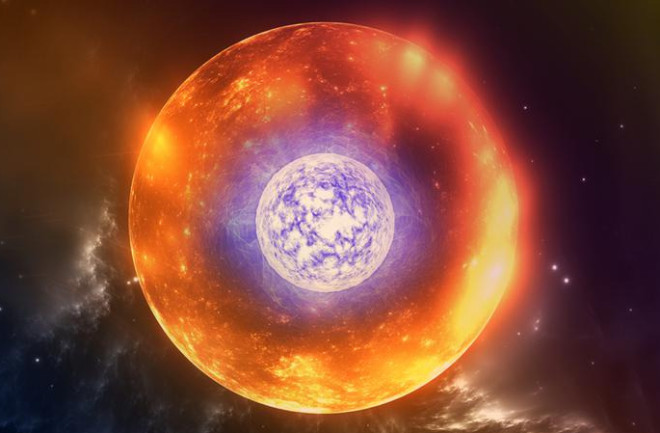 A Thorne-Żytkow object is a theoretical type of hybrid star created when a dense neutron star is swallowed by a puffy red supergiant star, as seen in this artist's concept. (Credit: Astronomy magazine)

Nearly half a century ago, physicist Kip Thorne (now a Nobel laureate) and astronomer Anna Żytkow suggested a strange, Russian-nesting-doll-type star might be hiding in the cosmos, just waiting to be found by those who knew how to seek it. Astronomers named these theoretical stellar hybrids Thorne-Żytkow objects.

The possible existence of Thorne-Żytkow objects came to light when their namesake researchers ran early computer simulations. When they did, they found that a neutron star — a tiny, ultra-dense stellar remnant left behind when a star goes supernova — could be gobbled up by a red supergiant star.

According to the simulations, if the “Twins” (in the Danny DeVito-Arnold Schwarzenegger sense) get too close to one another, instead of one star getting ejected, the two stars can merge together. The city-sized, solar-mass neutron star would carry on living inside its much larger host, almost like a cosmic parasite.

But even if physics really allows for such stars to exist, finding them will be hard.

In a study published in 1975 in The Astrophysical Journal, Thorne and Żytkow suggested these stars would look almost identical to red supergiants like Betelgeuse in the constellation Orion. Supergiant stars are relatively common and are some of the youngest and largest stars in the universe. Thorne-Żytkow objects (TZOs) would look very similar to red supergiants, but are suspected to survive up to 10 times longer.

Ordinary red supergiants, like other stars, are powered by nuclear fusion in their cores. So when that energy runs out, their uncontested gravity causes them to implode before erupting as a supernova. But TZOs can live such long lives because they do not rely on sustained nuclear fusion in their cores to avoid collapse. Instead, a TZO’s neutron star core, which is already extremely compressed, largely prevents the rapid and uncontested gravitational collapse of the surrounding supergiant layers.

Astronomers have two different theories for how TZOs form — and they both depend on the initial objects starting their lives as two gigantic stars in a close binary system. In one theory, the bigger of the two stars would explode as a supernova first, leaving behind a neutron star. But over time, the remaining supergiant would continue to balloon outward, growing until it fully swallowed the nearby neutron star remnant.

Another possibility for the formation of TZOs is that when one star explodes as an asymmetric supernova, its remnant core could get a powerful “kick.” That could potentially fire the neutron star into the belly of the remaining red giant.

But no matter how they form, astronomers in 2014 announced they may have discovered the first Thorne-Żytkow object. The star was hiding some 200,000 light-years away in the Small Magellanic Cloud, a dwarf galaxy that orbits the Milky Way.

It was found by astronomer Emily Levesque, now at the University of Washington, with the help of her team of researchers. To find the suspected TZO, Levesque’s group used New Mexico’s Apache Point Observatory to study two dozen red supergiant stars in the Milky Way, as well as one of the Magellan Telescopes in Chile to study another group of supergiants in the Small Magellanic Cloud.

Upon reviewing the data, one star in particular stood out. The system, dubbed HV 2112, was initially cataloged as variable in 1908 by pioneering astronomer Henrietta Swan Leavitt. At the time, though, astronomers thought it was a red supergiant living out its dying days before going supernova.

However, more than 100 years after Leavitt first noted the strange object, Levesque and her team’s analysis revealed unusual chemical signatures that they thought could be the tell-tale signs of a mythical Thorne-Żytkow object. The researchers saw excess amounts of lithium, calcium and other elements, which they could only explain through the unique nuclear reactions that would occur inside a TZO.

But they couldn’t be completely sure; HV 2112 also seemed to have other strange chemical fingerprints that they didn’t expect to see. Based on these remaining mysteries, the team suggests that either theoretical models haven’t fully appreciated the nuances of Thorne-Żytkow objects, or HV 2112 simply wasn’t a TZO in the first place.

The bizarre nature of the find sparked headlines at the time. But for astronomers, it was also an important discovery because it offered evidence for stars powered by processes beyond nuclear fusion.

But four years later, in 2018, another group of astronomers pushed “pause” on this unique find. They’d done their own analysis of HV 2112 and compared it to similar stars, but didn’t find the same levels of excess calcium or other elements spotted by Levesque’s team. The new analysis did show a surplus of lithium, but, other than that, the results suggested this star was basically an ordinary red supergiant.

Though the team might have dashed HV 2112’s dreams of being different, they did offer up the hope a replacement candidate. They found another possible Thorne-Żytkow object, cataloged as HV 11417, which did sport some of tell-tale signs that astronomers predicted the objects should have.

One thing the two teams do agree on is that when it comes to Thorne-Żytkow objects, both theory and observation still have a long way to go.