This Telescope Will Capture the First Image of a Black Hole 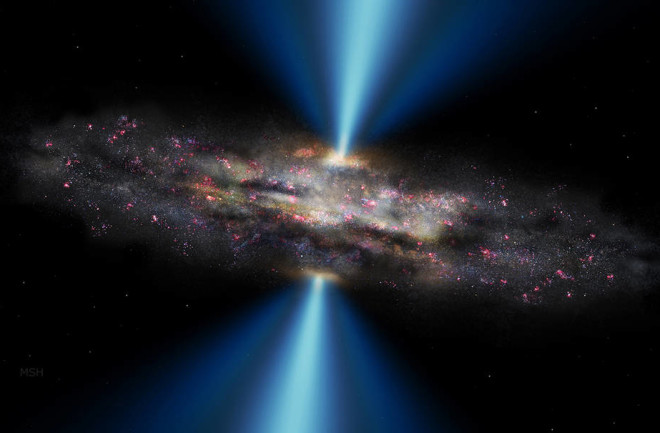 The only way we've been able to see black holes was through the eye's of an artist. An Earth-sized telescope could change that. (Credit: M. Helfenbein, Yale University / OPAC)

(This article originally appeared on Astronomy.com)

Many people are drawn to astronomy by its beautiful images. Who hasn't been captivated by a glowing planetary nebulae, or the glittering sweep of a spiral galaxy? But sometimes astronomers study things you simply can't take a picture of. A game-changing exoplanet light-years away might be known only by its U-shaped light curve. And, of course, black holes by their very nature emit no light for us to see. The black hole problem is peculiar. Of course, you can't see something that neither emits nor reflects light. It is a physical impossibility. But black holes are violent places with vast environments of turbulent gas and highly energized material that lights up brilliantly -- think of the gorgeous collimated jets of M87, for instance.

Scientists have simulations of what the event horizon of a black hole might look like, but no telescope images — yet. (Credit: Feryal Ozel)Earth-sized Telescope The loudest nearby black hole (by some measurements, at least) is the Milky Way's own central supermassive black hole, Sagittarius A* ("A-star"). And we might be about to get a real picture of its heart. Feryal Ozel from the University of Arizona is part of the Event Horizon Telescope, and she presented its capabilities on the second day of the American Astronomical Society's meeting in Kissimee, Florida. This telescope will take a picture of the innermost region of a black hole: its event horizon, where material passes the "point of no return" on its way toward being consumed. But even for Sgr A*, the closest black hole, trying to image this area is like trying to resolve a DVD on the surface of the Moon. To do so would require building a telescope the size of the entire Earth. But luckily, Ozel and her team can do just that.

Galaxy M87 has a supermassive black hole at its center that powers enormous jets that stream out into space as brilliant columns of material. But the black hole itself remains hidden. (Credit: NASA and The Hubble Heritage Team/STScI/AURA)

Silhouette of a Singularity

They use a process called interferometry to link telescopes together from around the world to form one enormous virtual dish. And by looking at millimeter wavelengths, they can peer through the flow of material swirling around the black hole to see right down into its center. Such resolution still will be possible for only the most nearby black holes like Sgr A*. But the rich collection of information the telescope will return will shed light on other black holes as well, even if they won't return quite such spectacular imagery. The data will allow researchers to understand the flow of material around black holes and even perform tests of general relativity. The singularity that is the black hole itself will remain forever out of our sight. But seeing the scientifically precious event horizon heart of a black hole will yield enormous science. The observatory will come online in early 2017. So stick around, and before too long, we won't have to say "artist's depiction." Korey Haynes is an associate editor of Astronomy