This Star Has Exploded Annually For Millions of Years 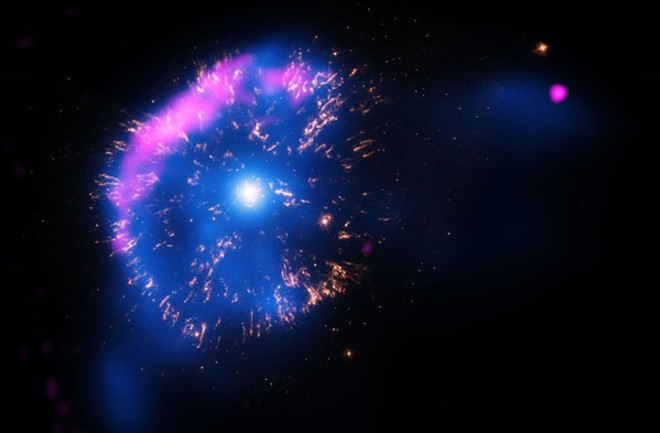 GK Persei, seen above, is a prime example of a nova remnant. Unlike supernovae, which blow stars apart from within, novae explosions occur on the surfaces of accreting white dwarfs. Though the previous record for largest nova remnant is about 3.5 light-years wide, researchers recently discovered M31N 2008-12a, a nova remnant that spans over 400 light-years.(Credit: X-ray: NASA/CXC/RIKEN/D.Takei et al; Optical: NASA/STScI; Radio: NRAO/VLA)

Astronomers have discovered a star in the Andromeda galaxy that has been regularly erupting for the past million years, leaving behind one of the biggest shells of ejected material scientists have ever seen.

The new research, which was published last month in the journal Nature, not only marks the first discovery of such a super-remnant in another galaxy, it also paves the way for detecting a potentially massive population of repeatedly exploding stars, called recurrent novae, which may help shed light on how the universe has changed over time.

The star responsible for this expansive remnant, which stretches over 400 light-years across, is actually from one of the most diminutive types of star: a white dwarf. These stellar corpses are left behind after a smallish star dies and blows off its outer layers, leaving behind only its dense core.

But in the case of this remnant, catchily named M31N 2008-12a, the culprit is not your ordinary white dwarf. This tiny star has a dance partner.

As the white dwarf and its nearby companion star orbit each other, the white dwarf rapidly siphons hydrogen from its buddy. As this unspent hydrogen fuels reaches the surface, it’s heated and compressed thanks to the white dwarf’s intense gravitational pull. Eventually, the hydrogen reaches a breaking point and spontaneously fuses to create helium, resulting in a powerful surface explosion we call a nova.

This burst of fusion causes the white dwarf to temporarily brighten up to a millionfold as it ejects material outward at about 3 percent the speed of light. In the case of M31N 2008-12a, over time, these repeated explosions have created an extensive and ever-expanding cocoon of gas and dust around the white dwarf.

According to the study, “Larger than almost all known remnant of even supernova explosions, the existence of this shell demonstrates that the nova M31N 2008-12a has erupted with high frequency for millions of years.”

It Keeps Going, and Going…

The massive size of the remnant is not its only claim to fame. Indeed, M31N 2008-12a also now holds the title of most frequently recurring nova, as it erupts at least once a year. “When we first discovered that M31N 2008-12a erupted every year, we were very surprised,” said co-author Allen Shafter of San Diego State University in a press release. This is because most recurrent novae only explode about once a decade.

But despite the fact that the white dwarf has spent the past million years or so exploding annually, researchers don’t think it will last forever. Once the white dwarf surpasses the Chandrasekhar limit — which is about 1.4 times the mass of the sun — it will irreparably blow itself apart as a supernova or collapse down into a neutron star.

According to theory, white dwarfs that are approaching the Chandrasekhar limit should undergo frequent novae explosions, resulting in gigantic remnants. And because that’s exactly what astronomers see happening around M31N 2008-12a, they think this star may be priming up for a supernova explosion itself. However, you and I likely will not be around to witness it.

“In less than 40,000 years,” the study says, “the underlying composition of the white dwarf will be revealed incontrovertibly when either a type Ia supernova or an accretion-induced collapse of the white dwarf to a neutron star is observed.”

If the researchers are able to find other examples of huge remnants around different novae, they think they may learn a bit about type Ia supernovae. Because type Ia supernovae have very predictable brightnesses (which is why they’re called standard candles), by studying them, researchers can pin down cosmic distances with extreme accuracy. Ultimately, this helps them better understand how the universe grows and evolves over time.

“They are, in effect, the measuring rods that allow us to map the visible universe,” said Shafter. “Despite their importance, we don’t fully understand where they come from.”

So for now, Shafter and his colleagues are working hard to determine whether super-remnants like M31N 2008-12a are the exception, or the rule. And if they’re as common as some think, then the next step becomes improving our ability to spot them.