Most massive galaxies today aren't forming many stars. So when did these galaxies stop? 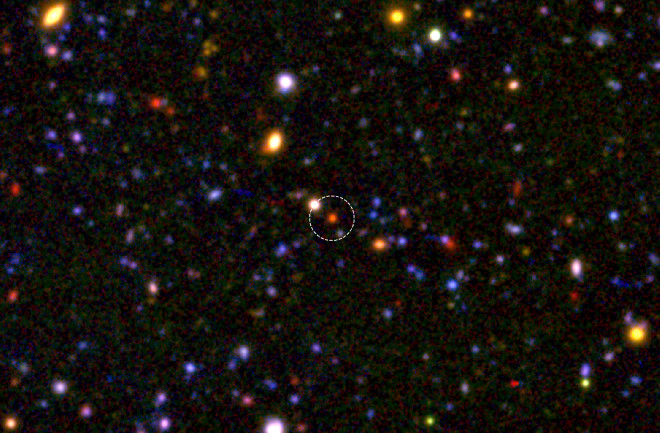 The distant galaxy marked in this image from the Subaru/XMM-Newton Deep Field is now the earliest known example of a massive galaxy that has stopped forming stars. (Credit: NAOJ)

Astronomers have discovered a distant, massive galaxy, seen as it was at about 1.5 billion years after the Big Bang. And it seems to be done forming stars. It's the earliest known example of a massive galaxy that has finished forming stars. And it implies that other massive galaxies may have completed the first phase of their growth this early in the universe’s history as well.

The researchers, led by Masayuki Tanaka of the National Astronomical Observatory of Japan, presented their findings in a recent paper in The Astrophysical Journal Letters.

Astronomers have noticed that most massive galaxies in the nearby universe today aren’t forming many stars.

“When these galaxies stop forming stars is one of the outstanding issues in the field of galaxy formation and evolution,” Tanaka said via email.

Tanaka and his team were looking for distant, massive galaxies that had stopped forming stars when they noticed this particular one from just 1.5 billion years after the Big Bang.

The finding also adds to astronomers’ picture of how massive galaxies grow and change with time.

When astronomers peer deep into space, seeing galaxies as they looked billions of years ago, they find that massive galaxies tend to be dense and compact. But massive galaxies near us today also have sprawling edges, making them much larger.

This makes astronomers think that these giant objects must grow in two phases. First, they birth lots of stars in their centers, forming dense cores. Then, they accumulate more stars around the edges when they merge with other galaxies.

Finding this distant galaxy with a fully formed core implies that the first step of this two-phase galaxy growth picture could have been completed as early as just 1.5 billion years after the Big Bang.