This Mammoth Rogue Planet Has Some Serious Magnetism 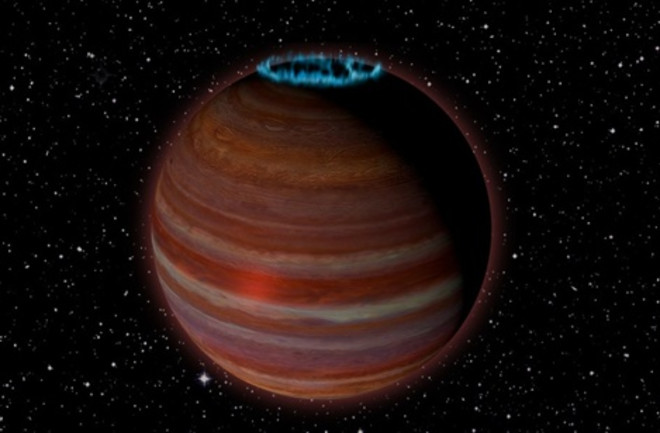 SIMP J01365663+0933473, shown here in this artist’s concept, is a massive, nearby exoplanet with a powerful, aurora-generating magnetic field.(Credit: Caltech/Chuck Carter; NRAO/AUI/NSF) A bizarre rogue planet without a star is roaming the Milky Way just 20 light-years from the Sun. And according to a recently published study in The Astrophysical Journal, this strange, nomadic world has an incredibly powerful magnetic field that is some 4 million times stronger than Earth’s. Furthermore, it generates spectacular auroras that would put our own northern lights to shame. The new observations, made with the National Science Foundation’s Karl G. Jansky Very Large Array (VLA), not only are the first radio observations of a planetary-mass object beyond our solar system, but also mark the first time researchers have measured the magnetic field of such a body.

The peculiar and untethered object, succinctly named SIMP J01365663+0933473 (we’ll call it SIMP for simplicity's sake), was first discovered back in 2016. At the time, researchers thought SIMP was a brown dwarf: an object that’s too big to be a planet, but too small to be a star. However, last year, another study showed that SIMP is just small enough, at 12.7 times the mass and 1.2 times the radius of Jupiter, to be considered a planet — albeit a mammoth one. “This object is right at the boundary between a planet and a brown dwarf, or ‘failed star,’ and is giving us some surprises that can potentially help us understand magnetic processes on both stars and planets,” said Arizona State University’s Melodie Kao, who led the new study on SIMP, in a press release. For a planet, SIMP is also pretty hot: The world has a surface temperature of over 1,500 degrees Fahrenheit (825 Celsius). For comparison, the hottest planet in our solar system is Venus, which sports an average temperature of around 875 F (470 C), while the Sun, a relatively small and cool star, has a surface temperature of about 10,000 F (5,500 C). However, it’s important to note that Venus gets most of its heat from the Sun. And since solitary SIMP is not orbiting a star, its heat must be leftover from its initial formation some 200 million years ago. So, over time, the planetary goliath will continue to radiate away its warmth.

According to the most recent study, SIMP is not only gigantic by planetary standards, but it also possesses a magnetic field that is millions of times stronger than that of our home planet. And although this magnetic field helps SIMP produce stunning light shows, the auroras are not generated in the same way as they are here on Earth. Jupiter has, by far, the most powerful magnetic field in the solar system. At nearly 20,000 times the strength of Earth’s, Jupiter’s field produces astoundingly bright auroras. These occur when electrically charged particles are accelerated along the planet’s magnetic field lines before smashing into atoms in Jupiter’s upper atmosphere at around 3,000 miles (5,000 kilometers) per second. On Earth, a similar process produces what we call the northern and southern lights; however, the charged particles that lead to Earth’s auroras primarily come from the Sun in the form of solar wind. On Jupiter, however, the charged particles mainly come from its moon Io instead of the solar wind. Since SIMP does not have a star bombarding it with wind like Earth does, the researchers believe that SIMP’s auroras may be produced more like Jupiter's, which means SIMP may have a moon.

To recap: SIMP seems to be a massive and magnetic exoplanet without a star that may have a moon that is generating brilliant auroras while wandering the Milky Way. Whew. That’s impressive. But how will this fascinating find help astronomers learn more about the universe? “This particular object is exciting because studying its magnetic dynamo mechanisms can give us new insights on how the same type of mechanisms can operate in extrasolar planets,” said Kao. “We think these mechanisms can work not only in brown dwarfs, but also in both gas giant and terrestrial planets.” In other words, SIMP will help astronomers better understand how magnetic fields are generated in exoplanets. But wait, that’s not all! “Detecting SIMP J01365663+0933473 with the VLA through its auroral radio emission also means that we may have a new way of detecting exoplanets, including the elusive rogue ones not orbiting a parent star,” said co-author Gregg Hallinan of Caltech. So, there you have it. SIMP is a supremely interesting object in its own right, but most importantly, this new research opens the door to future insights into exoplanetary magnetic fields and auroras, as well as aids in the hunt for exoplanets that apparently like their privacy. This article originally appeared on Astronomy.com.