This Lake on Mars Was Drying Up 3.5 Billion Years Ago 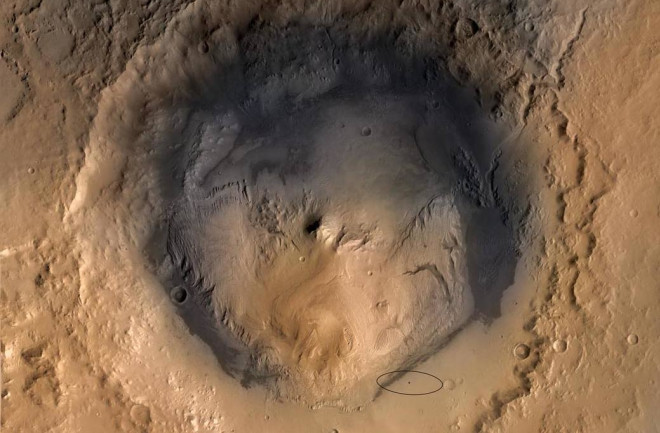 Mars was a very different place as a young planet. Liquid water dotted the Red Planet’s landscape with lakes and rivers. But the planet’s climate changed drastically in the past few billion years. Today, scientists see the remains of the planet’s bodies of water in dried-up river channels and salts left in its rocks.

New data from the Curiosity rover now show that the planet’s waters were evaporating about 3.5 billion years ago. Curiosity found pockets of concentrated salts in rocks about 3.3 billion to 3.7 billion years old in Mars’ Gale Crater — evidence that a salty lake was evaporating from the surface around that time, scientists reported Monday in a new paper in Nature Geoscience.

Curiosity is well suited to studying the evolution of Mars’ environment because of its access to Gale Crater. The site formed when a meteor hit Mars at least 3.5 billion years ago, leaving a 100-mile-wide hole in the ground — and exposing layers of rock hundreds of yards deep. The deepest rocks are the oldest, and higher rocks make up younger, more recently formed layers. Curiosity can analyze the chemical compositions of the rocks and, in the process, document Mars’ history back at least 3.5 billion years. It’s a unique opportunity to study how a planet’s environment can change over that much time.

Curiosity’s latest work shows that rocks in Gale Crater between about 3.3 billion and 3.7 billion years old had pockets of sulfur-containing salts called sulfates. Older rocks that Curiosity analyzed didn’t have such concentrations of these salts, leading scientists to believe that a lake at Gale Crater was particularly salty around this time. The lake may have gotten saltier because the waters were evaporating, leaving higher concentrations of salt behind. If true, it implies that Mars’ climate was changing and becoming drier around 3.5 billion years ago.

To William Rapin, a planetary scientist at Caltech and an author of the new study, the project is an exciting way to uncover Mars’ history and understand more broadly how planets and their environments evolve.

“Our geology and our understanding of planets’ climates is very Earth-centric,” Rapin says. “Mars has had its own fate, potentially very different than the Earth.”