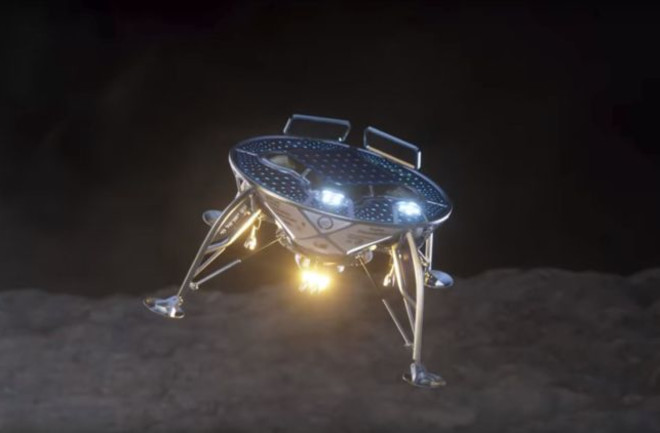 This visualization shows what the SpaceIL lander might look like landing on the lunar surface. (Credit: SpaceIL)

SpaceIL, a privately funded non-profit organization from Israel and the government-owned corporation Israel Aerospace Industries (IAI) will soon launch for the lunar surface with a digital time capsule on board. If successful, it will mark not only the first Israeli craft to land on the moon, but the first-ever private moon lander, as well.

The non-profit organization announced in a statement in December of 2018that their spacecraft, manufactured by IAI and named Beresheet (the Hebrew word for Genesis), will launch to the moon in February. It will launch along with a host of satellites as a secondary payload on a SpaceX Falcon 9 rocket.

SpaceIL began their journey to the moon as the only Israeli team participating in the Google Lunar X Prize competition. The competition originally offered a prize of $30 million to the first non-government team to land on the lunar surface and complete a specific set of tasks. Though the competition ended when no team was able to reach the moon by the competition deadline of March 31, 2018, SpaceIL has continued its mission to the moon.

This February, SpaceIL’s robotic lander will launch from Cape Canaveral in Florida. The time capsule on board will consist of three small discs holding digital files containing Israel’s declaration of independence and national anthem, songs in Hebrew, the Jewish prayer for a safe journey known as the Wayfarer’s Prayer, paintings done by Israeli children, the Israeli flag, the Old Testament, Israeli literature, and more.

The capsule, along with the spacecraft itself, will remain on the lunar surface indefinitely, as SpaceIL has no current plans to return the lander to Earth. According to SpaceIL’s statement, the spacecraft and the information on board may be found by future generations and distributed.

SpaceIL aims to carve out a space for themselves in the space industry and advance Israel’s presence in both the space sector and on the lunar surface. The company hopes that a successful moon landing could be a major catalyst for growth in the Israeli economy and a point of pride for the country.

“The spacecraft’s historic journey, which also includes a scientific mission, makes a significant contribution to advancing the space industry and the subject of space in Israel,” said Ido Anteby, the CEO of SpaceIL.