This Huge Galaxy Has the Biggest Black Hole Ever Measured

The monster black hole in galaxy cluster Abell 85 is roughly the size of our solar system, but packs the mass of 40 billion suns. 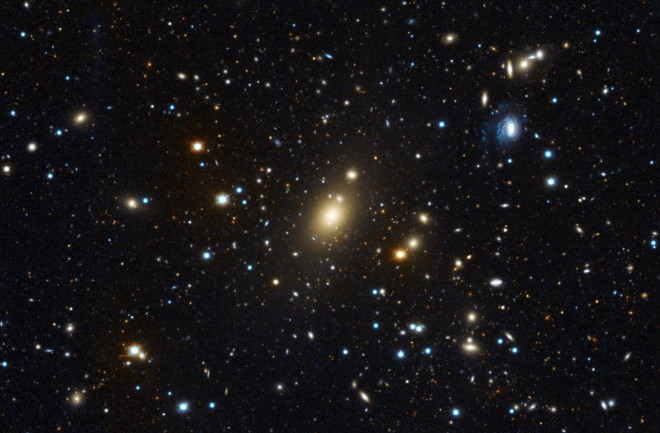 The Abell 85 galaxy cluster, shown here, is home to the largest black hole known in the universe. (Credit: Matthias Kluge/USM/MPE)

Astronomers have found the biggest black hole ever measured — it's 40 billion times the sun’s mass, or roughly two-thirds the mass of all stars in the Milky Way. The gargantuan black hole lurks in a galaxy that’s supermassive itself and probably formed from the collisions of at least eight smaller galaxies.

Holm 15A is a huge elliptical galaxy at the center of a cluster of galaxies called Abell 85. A team of astronomers captured a snapshot of Holm 15A’s stars in orbit around the galaxy’s central black hole and created a model to help them calculate the black hole’s mass. The team described their findings in a recent paper posted to the preprint site arXiv and set to be published in The Astrophysical Journal.

The resulting extra-large elliptical galaxy usually doesn’t have much gas from which to form new stars, so its center looks pretty bare after its black hole kicks out nearby stars. Astronomers call these huge elliptical galaxies with faint centers “cored galaxies.” Massive cored galaxies often sit in the centers of galaxy clusters.

The researchers are excited to find the most massive black hole ever measured.

“Just imagining a black hole that is so huge is cool,” said Jens Thomas, an astronomer at the Max Planck Institute for Extraterrestrial Physics in Germany and one of the study’s authors.

But the finding is also exciting because it lends support to astronomers’ current understanding of quasars, distant galaxies with massive central black holes that emit huge amounts of light as they gobble up nearby matter in a process called accretion. Studying quasars made astronomers think that black holes 10 billion or more solar masses must exist for some of these faraway quasars to be so bright.

“Finally, we managed to find one nearby, which sort of confirms that our idea of how quasars work and how the accretion on black holes can explain them makes sense,” said study author Roberto Saglia, also of the Max Planck Institute.