These So-Called 'Super-Puff' Worlds Could Be Exoplanets with Rings

Astronomers investigate whether mysterious low-density planets are actually ringed planets that have been misunderstood. 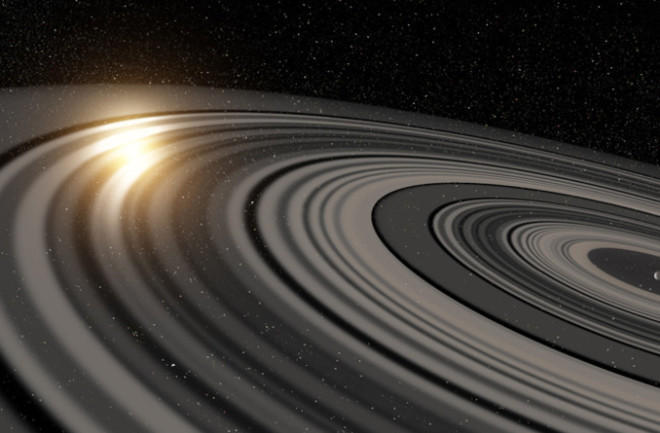 An artist's rendering of an exoplanet called J1407b passing in front of its parent star. Some astronomers think this world may have rings. (Credit: Ron Miller)

As astronomers find more and more planets outside the solar system, they’re bound to come across some strange ones. They call one type of weird exoplanet “super-puffs” because their densities seem to be far lower than even the gas giants in our solar system. But astronomers aren't sure how such wispy planets could form.

And now a pair of astronomers is exploring another possible explanation for the super-puff phenomenon. What if these exoplanets have rings like Saturn, which would throw off estimates of their sizes and densities?

The team found that rings can’t explain away all of the super-puffs found so far, but it might be able to account for some of them. Observations in the near future may be able to test whether these planets actually do have rings. The researchers recently published their work, which is still in peer review, on the preprint site the arXiv.

Shreyas Vissapragada, a planetary astronomer at Caltech, started thinking about the possibility of super-puffs being ringed planets after another astronomer asked him about it.

“If an alien observed Saturn with the Kepler space telescope, how badly would they get the density wrong if they didn't realize it had rings?” Vissapragada said he asked himself. He did the math and found that they might calculate Saturn’s density to be only half of what it really is.

He teamed up with Anthony Piro, an astronomer at the Carnegie Institution for Science, to investigate what this could mean for Earth astronomers’ observations.

The pair considered what the ring systems would have to be like for known super-puffs to be ringed planets. For example, most known super-puffs are fairly close to their stars, so their rings would have to be rocky rather than icy. Some of the planets wouldn’t be able to have rocky rings wide enough to throw off density estimates, because rocky material that's too far from the planet would clump to form moons. For other super-puffs, rings might still be a possibility.

Astronomers used simulations, like this one, of a ringed exoplanet passing in front of a star to see how differently a star's light would change when eclipsed by a ringed planet or a "bare" planet. (Credit: Anthony Piro and Shreyas Vissapragada)

The Future of Ringed Exoplanets

To find out whether a given exoplanet actually has rings, astronomers will have to make very precise observations as it passes in front of its star. The eclipse of a ringed planet would dim the star in a different way than the eclipse of a ringless planet. That means that, with time, careful measurements of the star dimming could reveal the presence of an exoplanet with a Saturn-like ring system.

Unfortunately, there aren’t yet precise enough observations of most super-puffs passing in front of their stars to do this test. Observations in the near future, like astronomers hope to make with NASA's James Webb Space Telescope, the researchers said, may be able to reveal ringed exoplanets.