These Are the Most Epic Pictures of Saturn You've Ever Seen 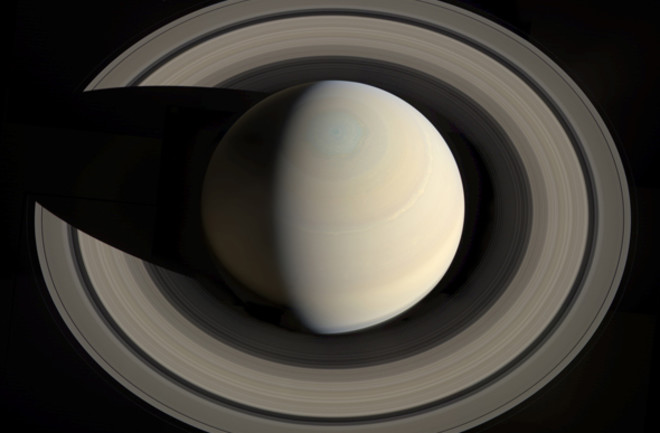 Wow. Just, wow. Image credit: NASA / JPL / Space Science Institute / GordanUgarkovic One week ago, Cassini snapped three dozen photos of Saturn, looking down from 935,000 miles above the ringed planet. The spacecraft split the shots between red, green and blue filters to approximate true color. The story may have ended there if a Croatian software developer hadn't taken it upon himself to make them into this jaw-dropping mosaic. Astronomy experts can't contain their excitement. Planetary Society blogger Emily Lakdawalla says it's "One for the history books,"

I try to be measured in my praise for spacecraft images. Not every photo can be the greatest space image ever. But this enormous mosaic showing the flattened globe of Saturn floating amongst the complete disk of its rings must surely be counted among the great images of the Cassini mission.

And Bad Astronomer Phil Plait ogles the mosaic at Slate,

Saturn is so beautiful that it would be next to impossible to pick what would be my favorite picture of it ever. Impossible until now. Because HOLY HALEAKALA Croatian software developer and “amateur” astronomical image processor Gordan Ugarkovic has created a picture of Saturn so stunning words fail me.

In addition to the stunning shadow of the orb seen cast on the rings, note that the clouds on the left side of the planet are actually being lit by light reflected off the rings. How cool is that?

Image credit: NASA / JPL / SSI / Composite by Val Klavans And Ugarkovic isn't the only one putting this suite of new images to use. NBC News highlights another stunning take on the views by Val Klavans, highlighting its unique perspective on Saturn's hexagonal vortex storm,

Astronomers have oohed and ahhed over Saturn's hexagonal storm system for decades, but it hasn't looked any cooler than it does in this picture from NASA's Cassini spacecraft.... The hexagon is nearly 15,000 miles (25,000 kilometers) across — big enough for nearly four Earths to fit inside. Cassini's pictures usually show the storm in infrared wavelengths, with a deep red glow or perhaps in false-color shades of red, orange and green. This picture, in contrast, was processed to approximate the hexagon's true colors.

And what colors they are.