These Ancient Whales Lived Like Modern Manatees 40 Million Years Ago

Scientists say that the group once swam through the shallow coastal seas of Morocco. 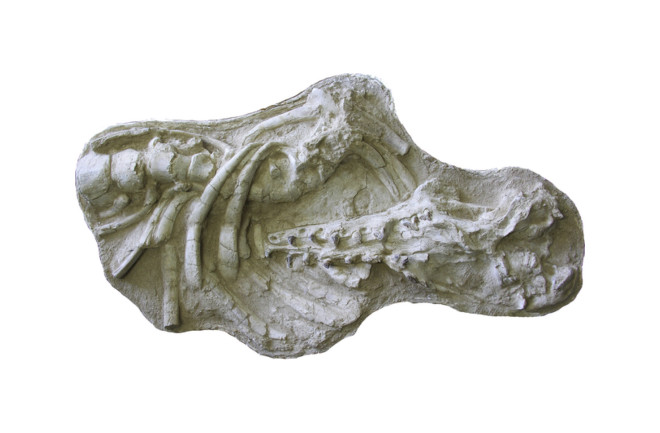 The distinctions between ancient and modern whales are astounding. While whales once lived on land, their modern marine descendants are now skilled swimmers, amazingly well-adapted to the seas.

With such dramatic differences between their bodies and behaviors, it's no wonder that the transition between these two types of whales — ancient and modern — was a mysterious and prolonged process, taking place over several millions of years. And though scientists are still struggling to understand the transition as a whole, they're slowly and surely unraveling much of its mystery.

According to a recent research paper published in PLOS ONE, a newly identified skull and partial skeleton of a strange whale species revealed a new genus from the shallow seas of Morocco, approximately 40 million years ago. Representing a transition stage in between the most ancient and most modern whales, the researchers suggest that the members of this genus lived manatee-like lifestyles along the Moroccan coastlines.

Scientists say that there are an abundance of anatomical signs suggesting that the ancient ancestors of whales lived on land. According to these scientists, an assembly of land-living animals started spending their time along the banks of the sea sometime around 50 million years ago. Their proximity to the shores allowed these animals to speedily dip into the water to avoid any dangers, and over time, and they decided to spend more of their lives splashing in the shallows.

Ultimately, the bodies of these ancient whale ancestors began to adapt. Their front legs transformed into flippers, and their back legs shrunk in size. Their tails became bulkier to support their swimming, while their nostrils shifted higher and higher on their heads to assist breathing at the surface of the water. By around 35 million years ago, they'd become modern whales.

But just before this evolution, a family of ancient whales arose, known as the Basilosauridae. These animals boasted several aquatic adaptations, which were not shared by their ancestors, such as their flipper-shaped fore limbs. They were also the first to live fully aquatic lifestyles. That said, while the Basilosauridae were the ancestors of all modern whales, scientists say they were still far away from looking — and acting — like the whales we see in the world today.

Taken from the Aridal rock formation in Morocco, the skull and partial skeleton demonstrated several anatomical traits that differ from any other Basilosaurid. These traits included a small-sized skull, and they contributed to the identification of the new genus.

In addition to identifying this genus for the first time, the analysis also revealed that the members of the group — which currently comprise of a single species called Antaecetus aithai — possessed particularly thick, dense bones. According to the researchers, the thickness and density of these bones might've reduced the animals' speed and maneuverability, though they might've also been associated with an increased lung capacity. This, they say, would've been advantageous for an animal swimming near the seafloor of the shorelines.

"Antaecetus is not likely to have been a pursuit predator but rather an ambush predator, lying in wait for passing fish or mobile invertebrates," the researchers conclude in their paper.