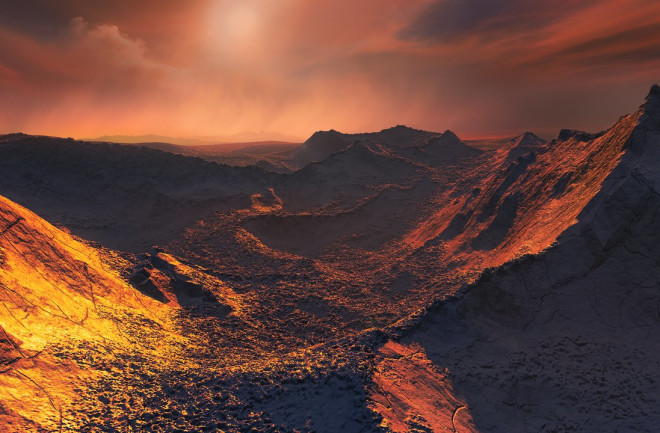 An artist’s illustration shows what of the exoplanet orbiting Barnard's Star might look like on the surface. (Credit: ESO/M. Kornmesser)

Just six light-years from Earth, the second closest star system to our sun hosts a frozen super-Earth, according to new findings by an international team of researchers.

Barnard’s Star is a small, ancient kind of sun called a red dwarf. And while it’s not easily visible without a telescope, Barnard’s Star has long attracted astronomer’s gaze as the fastest moving star in the night sky. Astronomers now say it’s also home to a frozen exoplanet at least three times as massive as Earth, making it a super-Earth. A collaborative team of researchers from the Red Dots and CARMENES projects, both efforts to find planets around nearby red dwarfs, used a variety of telescopes to discover this exoplanet, known as Barnard’s Star b, and explore its features. The Red Dots team was also involved in the recent discovery of planets around Earth’s nearest star system, Proxima Centauri. These latest findings were published Wednesday(Nov. 14) in the journal Nature.

Barnard’s Star b has a few major differences from Earth. The exoplanet orbits its star in about 233 days, far less than Earth’s 365 day orbit, but longer than many of the other known exoplanets discovered to date. The exoplanet is also much closer to its star than Earth, at just 0.4 times the distance between Earth and the sun. But, despite being so close to its star, light from Barnard’s Star provides the exoplanet with only 2 percent of the energy that the sun provides Earth. This means that, even though the exoplanet is close to its star, it’s still cold enough that water freezes. The researchers found that the exoplanet likely has a temperature of about -274 degrees Fahrenheit (-170 degrees Celsius).

There are still many mysteries surrounding this newly discovered exoplanet. “I think a big unknown is whether it has an atmosphere or not,” said Johanna Teske, a Carnegie Science researcher and study author. “If this planet had an atmosphere, maybe that could keep the surface temperature warmer,” Teske added.

To find Barnard’s Star b, these researchers used what is known as the Doppler effect. With the Doppler effect, as a planet orbits a star, the planet’s gravitational pull causes its star to wobble a little bit. When the planet moves closer to the star, the starlight is shifted toward shorter, blue wavelengths (called blueshift) and when the planet moves farther away from the star, the starlight shifts toward longer, red wavelengths (called redshift).

Among other instruments, the researchers used the HARPS spectrograph at the European Southern Observatory’s 3.6-meter telescope in Chile, to observe and measure these gravitational effect of the planet on a Barnard’s Star.

But it was also no easy feat. Barnard’s Star has a long history with astronomers making dubious exoplanet claims, and the researchers took great care to avoid repeating history.

“We used observations from seven different instruments, spanning 20 years of measurements,” Ignasi Ribas, the team’s lead scientist (Institute of Space Studies of Catalonia and the Institute of Space Sciences, CSIC in Spain), said in a statement.