An ancient impactor called Theia hit the Earth to create the moon. New research suggests the rest of that planet may still be inside the Earth. 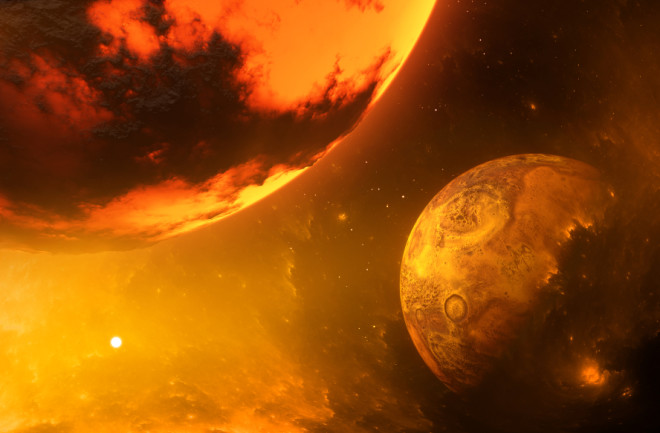 Researchers are fairly certain that we gained our favorite satellite, the moon, after a planet, Theia, collided with the proto-Earth 4.5 billion years ago. What’s not certain are the details surrounding Theia’s fate. Was it a hit-and-run, or did the mantles of the two planets merge?

Qian Yuan, Earth scientist at Arizona State University, and his colleagues recently suggested a new line of evidence to support the latter hypothesis, suggesting that Theia not only merged with Earth, but we might know right where the remnants of its mantle reside in Earth.

“Compared to the moon, there is much less [known] about Theia,” says Yuan. “The moon is there. You have samples. People have been there … few people care too much about the impactor.”

A lot of the work around the giant impact hypothesis involves comparing isotopes found on the moon with those found on Earth. Their similarities in composition suggest that the moon is made of a hunk of ancient Earth, meaning something like a giant impact knocked it off our Pale Blue Dot.

Original models estimated that the impactor, Theia, was about the size of Mars (half the size of Earth today). Though, some recent studies suggest it might’ve been more like four times the size of Mars, or roughly the size of the proto-Earth. Either way, most researchers agree that the core — the densest part — of Theia merged with the core of Earth incredibly quickly after the impact, in a matter of hours.

Today, Earth’s mantle isn’t completely uniform. About 8 percent of it is a little different from the rest, and forms two big piles near the core-mantle boundary. These two piles are called Large Low-Shear-Velocity Provinces (LLSVPs), so named because seismic waves called shear waves move about 1 or 2 percent slower when passing through them. And they’re huge: One is beneath the African continent, and the other under the Pacific Ocean.

Some researchers think the LLSVPs slow down the shear waves because they’re a higher temperature than the rest of the mantle. Others, like Yuan and his colleagues, think they’re denser and compositionally different in addition to being hotter.

Yuan says he was sitting in a planetary geochemistry class when the idea struck that the LLSVPs might be related to Theia. As he tells it, he was in ASU professor Micha Zolotov’s class, learning about the giant impact hypothesis for the formation of the moon. Zolotov mentioned that the weakest part of the theory was the hypothetical planet Theia — no one had ever found any direct evidence to support its existence. It’s totally gone. There’s no evidence of it in meteorites, the asteroid belt, anywhere. When Zolotov said this, Yuan recalls, “It struck me so hard. I thought, after the impact, [Theia] would've gone into Earth. Is it possible it went into the Earth and formed the LLSVPs?”

He pulled up a 2012 Nature paper by geochemist Sujoy Mukhopadhyay at the University of California, Davis, which examined noble gas isotopes from volcanic basalts in Iceland. Mukhopadhyay had shown that Earth’s mantle is heterogenous, with at least two separate sources, and that those sources are at least 4.5 billion years old. That is, older than the moon. “That was consistent with our hypothesis,” says Yuan. One of the sources could be Theia’s mantle, preserved in Earth’s mantle after the impact.

Next Yuan turned to ASU astrophysicist Steven Desch, who in 2019 had published new estimates for the composition of Theia itself. Desch, along with Katharine Robinson at the Lunar and Planetary Institute in Houston, used the composition of lunar samples from the Apollo missions to model a likely Theia, concluding it was much bigger than expected — about the size of 1 proto-Earth, or 4 Mars planets. Even more important for Yuan, Desch and Robinson estimated that Theia’s mantle had a higher abundance of iron oxide than Earth’s. This means it was denser, so when the two planets collided, Theia’s mantle would sink.

Yuan and Desch joined forces to figure out what Theia’s mantle composition would have needed to look like in order for it to resemble today’s LLSVPs after 4.5 billion years of mantle convection. They found that if Theia was any denser than Desch’s earlier estimate, its mantle would’ve sank too much, forming a global layer instead of two piles. Instead, their calculations revealed the estimates for Theia’s size and density were just right.

“What really stands out about [the study] is how creative it is,” Susannah Dorfman, a geoscientist at Michigan State University who was not involved in the study, says. “How it connects two fields that were looking at problems in two different ways.”

Dorfman explains that the simulations that they ran were solid. The only place the idea could fall apart would be if the assumptions they made turned out to be incorrect, like the specific iron oxide composition of Theia and how its density compares to Earth’s. Still, she says, “whenever you can get an apparently inevitable result from a certain set of starting conditions, that feels beautiful.”

Yuan is the first to emphasize there’s still a lot of uncertainty around the new idea. “We have to stress it’s a hypothesis, and we’re just proposing it for the first time,” he says. “It’s still very new.”

“I hope more researchers will test our hypothesis, to collect more evidence to either prove or disprove it,” Yuan adds. He says an obvious next step is to compare the compositions of noble gas isotopes in lunar samples with that from LLSVPs. “There’s no reason they would have a chemical relationship unless they inherited it from the ancestor, Theia.”

Dorfman says Yuan’s hypothesis has already garnered lots of attention. “I watched [Yuan’s] talk on YouTube,” she says. “He’s got 40,000 views. For a grad student talk at a conference, that’s unbelievable … This is one of the things the pandemic brings us, we can reach a far greater audience.”

You can watch Yuan’s talk below.