The US Needs to Seriously Beef Up Its Volcano Monitoring 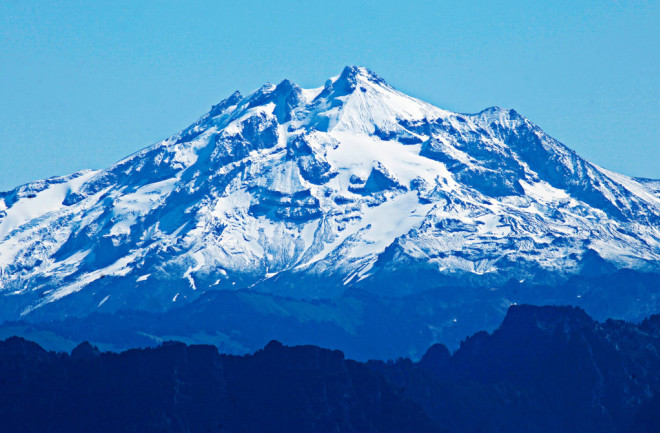 Glacier Peak in Everett, WAMark Mulligan/The Herald/AP Earlier this month, Senator Lisa Murkowski of Alaska and Maria Cantwell of Washington introduced a bill to establish a

National Volcano Early Warning and Monitoring System. Now, this isn't the first time the senators have have attempted to establish a system to coordinate and update the monitoring of the United States' many volcanoes, but it is a very timely bill. In December, the Bogoslof volcano in Alaska unexpectedly produced a violent explosive eruption---and continues to release occasional blasts that reach over 10 kilometers above the volcano. Explosions like that in the Aleutians can be a hazard for air and sea traffic in the area, but if such eruptions happened in the Cascades or Yellowstone, you could imagine the hazards.

Bogoslof is mostly off the grid when it comes to volcano monitoring. It has no seismometers, no webcams, no real surveillance. Even now, after almost two months of eruptions, the Alaska Volcano Observatory relies on data from seismometers on other islands, reports from pilots and local residents, and remote sensing data from weather satellites to tell what's happening at Bogoslof. This is far from ideal when you're trying to keep people and property safe. Ideally, seismometers and other instruments at the volcano would measure the small changes in volcanic tremor that can give the first hints of an eruption in the next days to minutes. Now, you could argue that Bogoslof is in the middle of nowhere (and it is), so nobody should be surprised that it doesn't have an array of instruments to measure its every move. There are hundreds of active or potentially active volcanoes in the Aleutians, so keeping a close watch on all of the is far beyond AVO's capabilities. However, let's consider another volcano: Glacier Peak in Washington State. Glacier Peak sits less than 125 kilometers from some major towns and cities, including Seattle, Everett, and Bellingham. It feeds rivers that drain into valleys where people live and work. It is by no means in the middle of nowhere. Over its history, it has produced some of the largest explosive eruptions in the Cascades over the last 25,000 years. It likely erupted last only a few hundred years ago. In all, it can be seen as a major potential volcanic hazard for the Pacific Northwest. So, how many seismometers watch this sleeping volcano? Right now: one. The single seismometer keeping vigil on Glacier Peak is a bit of a blunt instrument. Although it can detect shaking, you need at least a few seismometers to precisely locate the depth of earthquakes and tremors, especially if the seismicity is low. Most earthquakes associated with magma moving under a volcano, especially early on, are not big---lower than magnitude 2, so small that most people wouldn't even feel any shaking. One lonely seismometer might be able to tell us that shaking is happening, but it would be difficult to deduce the style of shaking (important to tell if it is magma-related) or the depth of shaking (and even the exact geographic location over the shaking). This is why Senator Murkowski wants to

enhance and modernize the country's volcano monitoring. While Bogoslof's eruption can be ignored to some degree, eruptions at places like Glacier Peak could pose major risks to life and property. Although the US Geological Survey Volcano Hazards Program could deploy temporary instruments, that reactive system could miss significant signs that permanent installations would have caught.

It won't be easy to get something like a

National Volcano Early Warning and Monitoring System set up. The lower 48 states haven't experienced an eruption since 2008, and the last major eruption was in 1980---both at Mount St. Helens. It's easy to ignore the threat of eruptions when they happen so infrequently. But almost every western state has potentially active volcanoes. Monitoring the Salton Sea in California or Craters of the Moon in Idaho could be vital for protecting people both near and far from the eruption.